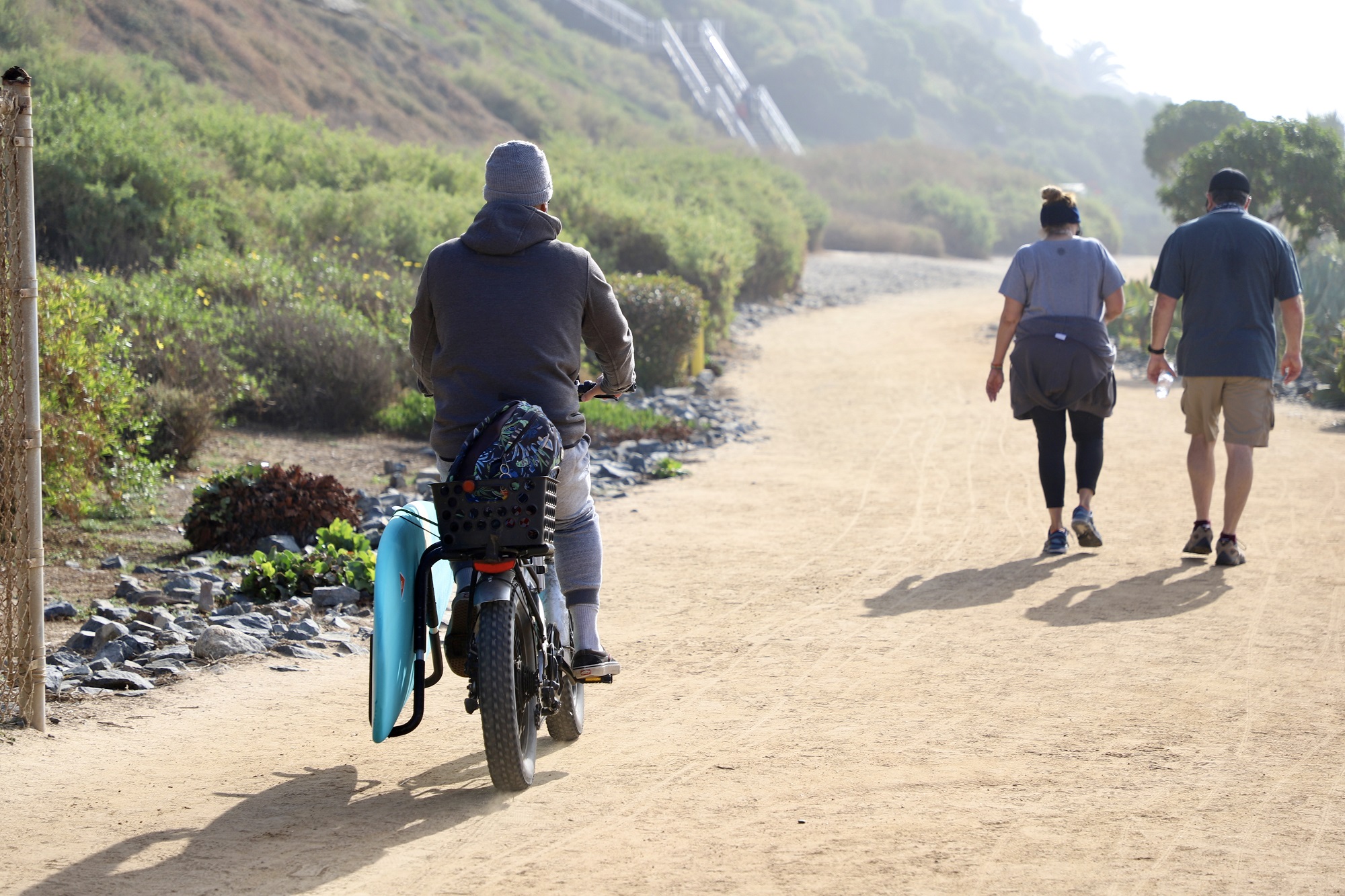 The San Clemente City Council unanimously voted Jan. 18 to introduce an ordinance prohibiting electric bicycles on the beach, Beach Trail and the municipal pier, as well as amend other activities in the area.

The vote followed the initial approval to consider e-bike bans in areas around the city, namely the coastal trail, during the council’s last meeting on Dec. 21, 2021, when city staff was directed to return with a draft of the ordinance.

Since then, San Clemente residents and e-bike riders vocalized that not all locations needed to ban the vehicles. Following public input during the Jan. 18 meeting, language in the draft ordinance prohibiting e-bikes from the city’s municipal, or inland, trails was removed.

Samantha Wylie, director of the Beaches, Parks, and Recreation Department, explained that the ordinance in front of the council was divided into two sections. The first dealt with the prohibition of e-bikes on the municipal trails, and the second was concerned with the beach component.

Councilmember Laura Ferguson said she heard from neighbors and other residents about their displeasure with the inclusion of the inland trails’ prohibition of e-bikes, along with the coastal trail’s, as it was issues related to the Beach Trail that led to the ban.

“To my knowledge, there’s no problem on the trails that are inland,” Ferguson said.

She requested the modification to the ordinance that would remove the section to prohibit e-bikes on the inland trails.

Ward contested that the city does not permit motorized vehicles on any trails, and that the blurred line between e-bikes and motorcycles allows riders to keep operating them despite the fact that all e-bikes have an electric motor. Contrary to another point of Ferguson’s, Ward added that not all the municipal trails are as wide as initially described.

Ward suggested the council ban e-bikes for the time being, until it can address whether they should be counted as motorized vehicles, in which case they would not be allowed on trails.

“Maybe once we do that, we can figure out some inland trails (where) we can work that out and maybe look at the ones that are wide and try to figure out how to do that,” Ward said, adding, “I think, while we’re trying to implement something like this, we need to be consistent.”

Agreeing with Ferguson that the council lumped in the inland trails with the Beach Trail at the last meeting, Knoblock said he had no problem with removing an inland-trail ban from the ordinance. Duncan added that residents get access to trails they would not otherwise experience without e-bikes.

During her presentation, Wylie also touched on a page within the agenda that contained language regarding the prohibited use of all bicycles on a section of the Beach Trail.

“There’s been an ask from a public safety standpoint, to prohibit the Corto Lane area from bicycle-riding,” she said. “This is the pathway from the asphalt base at the pier to the Corto Lane restroom.”

Staff added a full bike-riding ban within the Corto Lane stretch to the ordinance, and sought further direction from the council.

“Regarding the Corto Lane ‘no bicycles’ (portion), clearly that is a narrow stretch of trail,” Knoblock said. “It’s extremely difficult to walk it, let alone (have) any bikes.”

All councilmembers favored restricting all bicycles in the Corto Lane stretch of the Beach Trail.

Mayor Gene James added that the city will also need to look at e-bike and bicycle behavior on the sidewalks going forward.

“Many of these bicyclists, or e-bicyclists, when it’s convenient to be on the sidewalk, they’re a pedestrian, and if they want to be in the flow of traffic, they’re on the street,” James said. “Somehow or another, we’re going to have to figure out how we’re going to address this going into the future.”

Additionally, to give out license plates to e-bikes as some members of the public suggested, it would require a significant administrative effort. James, Ward, and Duncan were in favor of the suggestion, with Duncan stating that the council could request staff to present a report on the feasibility of a registration program before an upcoming Bike Safety Rodeo.

Officially, the council introduced the ordinance amending the city’s municipal code relating to the use of bicycles, e-bikes and other activities on the pier, beach, beach access road and Beach Trail. At the council’s next meeting, it’s expected to formally adopt the ordinance.