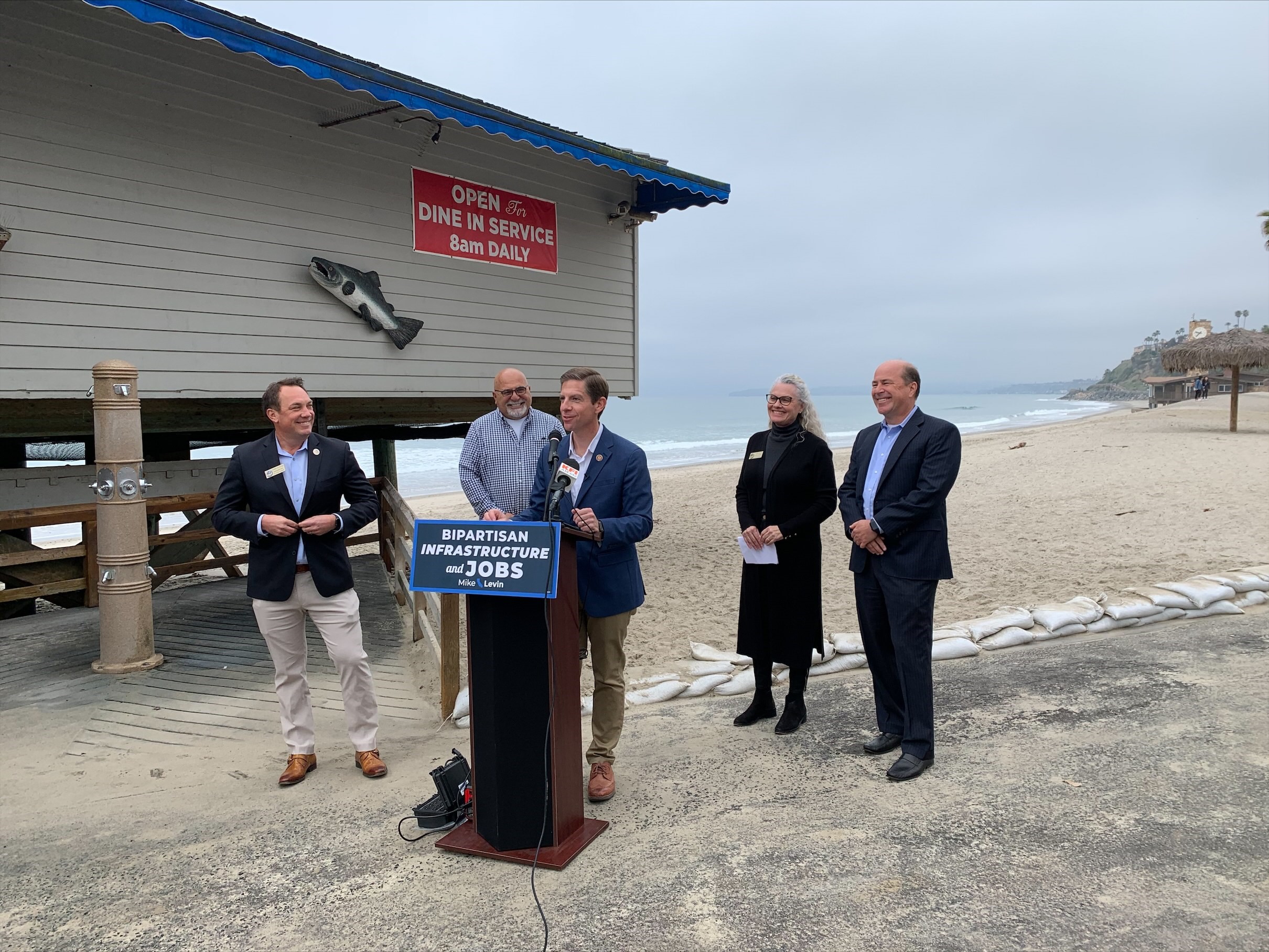 Featured Image: Rep. Mike Levin (center) holds a press conference at the base of the San Clement Pier on Friday, Jan. 7, to talk about the potential federal funding for the San Clemente Shoreline Protection Project. San Clemente Councilmembers Chris Duncan (far left) and Kathy Ward (right), along with Bob Novello (left), of Fisherman’s Restaurant and Bar, and Chris Aitken (far right), of the Downtown Business Association, joined Levin to discuss the positive effects of the project. Photo: C. Jayden Smith

Steps away from the iconic Fisherman’s Restaurant and Bar at the front of the San Clemente Pier, Rep. Mike Levin and other local figures championed the progress made toward combating the ongoing encroachment of waves on San Clemente’s beaches on Friday, Jan. 7.

The project and its objectives—to place nearly 251,000 cubic yards of sand on the beach from Linda Lane to T-Street Beach—would require $14 million to get off the ground, including $9.2 million from the federal government.

The officials highlighted the need for the federal funding, which they’re hoping will come from the Infrastructure Investment and Jobs Act that was signed into law in late 2021.

Levin led by saying his goals were to secure the money necessary for the project out of the $1.2 trillion available within the law, which was directed to improve infrastructure necessities such as public transportation, electric vehicle charging networks, and broadband expansion.

“Many of our roads and bridges are crumbling, our water infrastructure is out of date, and in some places, particularly like the train tracks here next to us, our railroads are in desperate need of upgrades and repairs,” Levin said.

Locally, water recycling and desalination endeavors could soon see financial support, as well as the Shoreline Protection Project, which would receive funding from the $200 million reserved for the Army Corps of Engineers.

Millions of passengers ride Amtrak and Metrolink trains, and billions of dollars of goods and cargo move up and down the Los Angeles-San Diego-San Luis Obispo Rail Corridor that runs through San Clemente, according to Levin, who stressed the urgency in fighting coastal erosion on the city’s beaches.

He mentioned that he had previously secured money from the Army Corps for the planning, engineering, and design phases. Now, they need support to begin construction on the project that’s expected to widen the beach about 50 feet.

“It’s not only going to help provide storm damage reduction and protect these tracks, but it will also provide recreational benefits for the public and small businesses on our coasts that rely on access to the beaches and sand,” Levin said.

The congressman added that he has visited with the San Clemente City Council, along with other governments within his constituency, to determine what other projects might need funding.

Duncan on Friday said that the city wants to prioritize protection of the pier, which has also been damaged by coastal erosion, and fixing structural issues on the Mariposa Bridge along the Beach Trail.

Before any groundbreaking on the proposed projects can begin, Levin cautioned that some funding will be distributed to state agencies for them to choose which ones to support, while other federal monies might require matching funds from local governments.

“My great hope and expectation is that we’ll see shovels in the ground in the coming months,” Levin said. “But it will vary, on a case-by-case basis.”

Duncan said that the city’s beaches are its lifeblood and that by protecting the coastline, San Clemente’s identity can remain intact. He further explained that the tides move the sand to the southeast, out of the city and into Oceanside’s harbor, and that the Shoreline Project would only move that sand back to its original place.

“It’ll be the first step in a comprehensive plan that we need regional partners in, to not only keep our sand here and keep replenishing it, but also develop strategies to maintain the sand in place,” Duncan said. “That can be living shorelines, cobblestone berms, and creative measures that preserve the look and feel of our beaches but make sure that our sand stays in places as best as we can.”

Ward echoed Duncan’s comments about the beaches’ importance, in that they need to be maintained to retain the essence of a small, seaside community that residents love and to which visitors flock.

She added that the Shoreline Project has existed in some form for 20 years, and thanked Levin for his prioritization of the project and working to secure funding.

“It’s just taken so long,” Ward said about getting the project started. “What I have been told, being on council this long, is (that) it’s the changeover in Washington, (D.C.) and the Army Corps. They come and go, and we need someone there to really keep the project alive.”

Persistence is key, especially as the $14 million project is the first phase of several, according to Duncan. To maintain the beaches’ condition, the city will need to replenish each beach every six years.

While federal funding is not present yet, Levin reiterated his confidence in securing the money, which stems from investing time into a relationship with the Army Corps.

“I have every reason to believe that things are headed in a positive direction, and we’re hopefully going to see those efforts come to fruition,” Levin said. “We will leave no stone unturned until that funding comes to the community.”