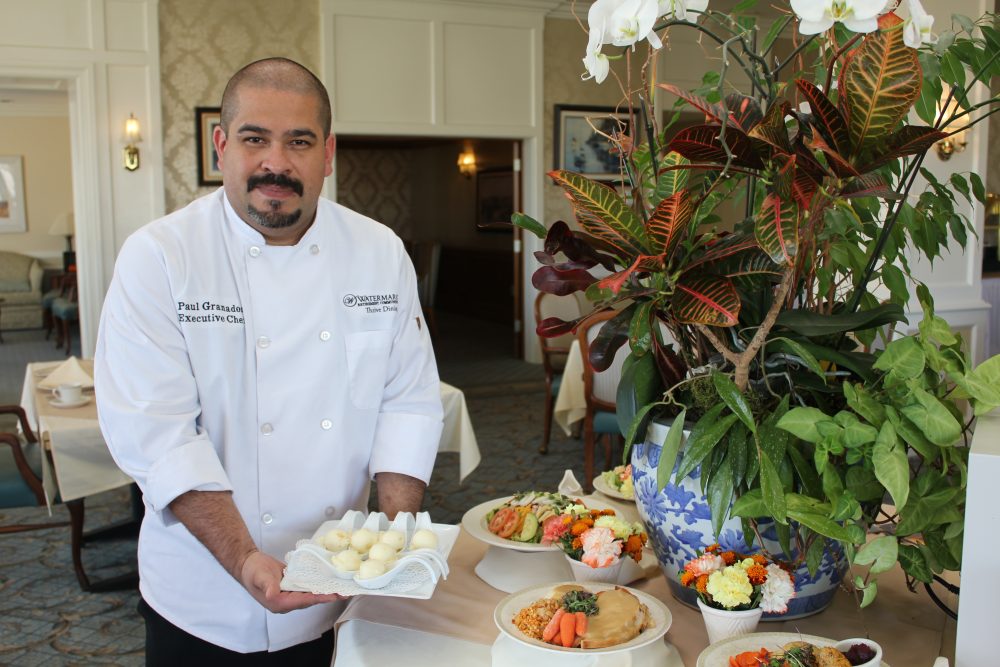 A New Way to Dine

Chef Paul Granados has a special mentality in his approach to preparing each meal at the Fountains at Sea Bluffs senior living facility.

“I imagine the people I’m serving are my parents. How would I want them to be treated? I’d want to make sure they were given the best, treated with respect and dignity and served the best quality meal,” Granados said.

The same philosophy is especially applied when preparing Thrive Dining meals—a special menu for residents with cognitive disabilities or residents in the memory care program. The program focuses on independence, dignity and accessibility. Kitchen staff transforms traditional menu items into nutritional, aesthetically pleasing portions that can be consumed without utensils while retaining all the flavor. The hors d’oeuvres-style meals are intended to be eaten by hand.

“Often times, our residents in our memory care program struggle to use utensils. Mealtime becomes a source of anxiety. Thrive Dining restores the dignity and independence back to our residents,” said Terry Brown, executive director at The Fountains.

According to the Alzheimer’s Association, there were less than two million people suffering from Alzheimer’s disease when President Ronald Reagan declared November to be Alzheimer’s Awareness Month. Now, that number has grown to more than five million. That means one in nine people over age 65 in America have Alzheimer’s. Half a million American’s have Parkinson’s disease. Older Americans who have experienced strokes, dementia and physical injuries may have difficulty using a knife and fork, causing mealtimes to become less enjoyable, independent and healthful. Officials with The Fountains said this often means their food is commonly fed to them by a caregiver, or their diet relegated to chicken nuggets, fish sticks and other processed foods often lacking in variety, nutrition and taste.

Watermark Retirement Communities—the parent company to The Fountains at Sea Bluffs—is a national senior-living company that prides itself on leading the way in new methods of care. Its Thrive Memory Care Program at The Fountains is based on more than 25 years of experience of innovative programming in a residential environment.

The concept behind Thrive Dining allows patients with cognitive or physical challenges to eat without assistance, utensils or distractions. It makes a difference in the diets of residents diagnosed with Alzheimer’s disease, dementia or cognitive impairments, Brown said.

People can eat on the go if they need to or they can sit and enjoy the nourishment. The meal tradition begins with a warm towel for a resident to clean their hands with and a lemon sorbet to cleanse the palate and increase appetite. The residents begin their meals with a clean palate to taste the food, which is delivered with upscale presentation and arrangement. Brown said that Watermark is one of the first companies to roll out a program like this in a wholesale manner.

“Often times, the patients battling these kinds of impairments are wasting away. This has been a solution to that problem,” Brown said. “All 50 Watermark communities in the country are implementing this solution.”

When Watermark rolled out the Thrive Dining program about a year ago, The Fountains sent Chef Granados to Des Moines, Iowa for special training. Granados spent a week learning the mechanical process of breaking down foods and how to present them to clients.

“The inventors showed me how to measure ingredients out, how to modify regular meals into a Thrive Dining version. I learned how to operate the equipment to ensure meals are always consistent for the resident,” Granados said. “It was a process. It took steps. I had to provide training to my staff when I got back. Now they have fun with it and enjoy it.”

Granados has been the executive chef at Sea Bluffs for nine years, but he’s spent a total of 17 years with the company, beginning his career in high school.

“Some of the residents here have watched me grow up. They’ve watched me move my way up in the kitchen,” Granados said. “Each resident deserves the same kind of dignity you would show your own family. I strive to deliver that level of care in each meal we present,” Granados said.

Menu items like chef’s salad, Thanksgiving tortes, orange chicken, lobster crepes, beef wellington, French toast, pancakes and cheese casserole are a few of the items chef Granados has transformed into grinded down, processed, handheld meals. The transformation into a new visual arrangement is what makes the program so unique, Brown said.

“You eat with your eyes first. The way our kitchen prepares these meals is like a work of art. The preparation and arrangement is what you could expect at any fine dining restaurant,” Brown said.

The menu selection is kept fresh with a rotating cycle for new dishes every five weeks.

Andrea Furch is the Memory Care Director, overseeing the facility that houses residents struggling with memory.

“The most noticeable difference has been less weight loss,” Furch said. “People are excited about mealtime again,” Furch said. “It has been amazing to see dignity restored to residents and their families while dining. We have seen a significant difference as it relates to increased appetite and participation during the dining process. As a result we’ve seen overall health improve.”

Chef Granados and sous chef Hazel Zuniga are inviting the public for a complimentary lunch tasting and demonstration at The Fountains at Sea Bluffs. It will be the third and final public tasting in a planned, a three-event series for the holiday season. The event will be held from 12:30-1:30 p.m. on Thursday, Dec. 13, at 25411 Sea Bluffs Drive.

You can RSVP by calling 949.234.3000 or by going on line at www.seabluffs.watermarkcommunities.com.