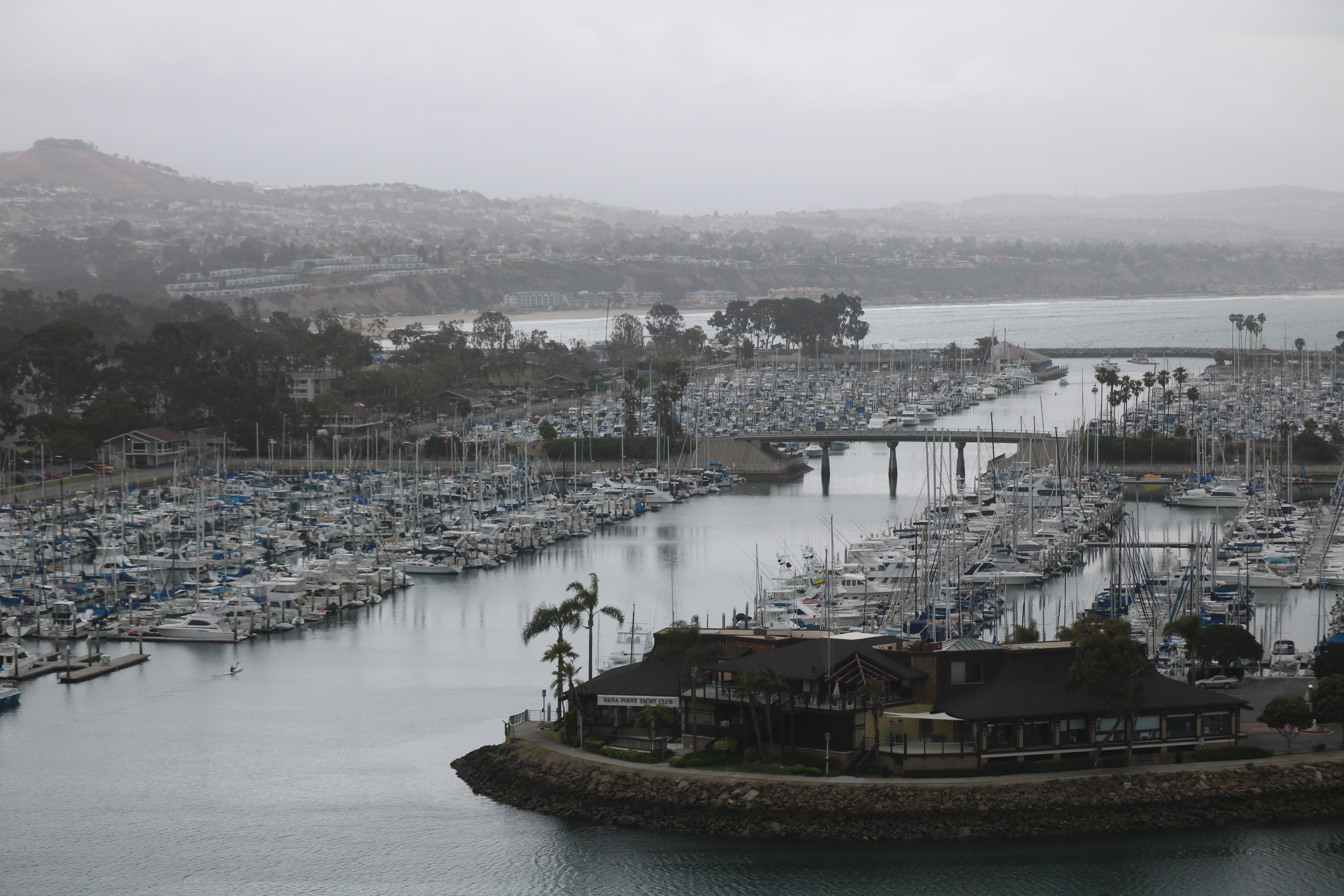 A New Dawn for the Harbor: Changes Begin Rolling Out under New Leadership

When Kim Tilly, formerly of the Dana Point Harbor Association (DPHA), conducted the awards breakfast event for the 44th Annual Boat Parade of Lights participants on December 16, it had lingered in the back of her mind that it might be the last time she would be part of the celebration.

The boat parade had grown exponentially since Tilly first came on board with the association in 1997.

“At first, it would be me and Donna (Kalez) judging from the back of the boat. It wasn’t even a formal contest with prizes at first,” Tilly said. “Now we have registration fees; the boaters really go all out to make it something special for the community.”

Tilly had stood in front of a restaurant full of boaters and community leaders during that awards breakfast and thanked Kalez and Kalez’s father, Don Hansen, of Dana Wharf Sportfishing & Whale Watching, for the friendship and memories built in the Dana Point Harbor.

“I got a little emotional that morning, yes,” Tilly said. “It wasn’t necessarily because I thought it would be my last boat parade. But thinking about how much the harbor and the relationships I’ve cultivated mean to me.”

“I just wanted to take this opportunity to let you all know that it has been such an honor and privilege to work with our boating community over the last 21 years in putting together this amazing community event. You all are such an inspiration to me,” Tilly said in the email. “Your dedication to providing a FREE community event where people have an opportunity to make memories and traditions for generations is not taken lightly. Your hard work and efforts in providing four nights of beautiful lights, truly creative representations of the theme, and crew members that dance, joust and sing take it to a new level each year.”

The county and DPHA have been effective partners in promoting and marketing the Dana Point Harbor as an outstanding community facility and as a visitor destination for the last 28 years. DPHA had been funded through membership dues and a cost-sharing agreement with the county.

The mission of the DPHA was “to coordinate, market and promote Dana Point Harbor, on behalf of its members and the County, as a tourism destination, an active boating and recreational facility and viable marketplace for residents, community and visitor use.” The office had been the primary marketing, promotional and event producer since its inception in July 1991.

The lease agreement between the county and the new master lessees (Dana Point Harbor Partners) shifted all marketing and promotional responsibilities to Partners. As a result, the county terminated the cost-sharing agreement with the DPHA, meaning the DPHA would no longer have the funds to continue its mission.

Tilly’s final Dana Point Harbor Association meeting was held Thursday, May 9, where she received accolades from Senator Patricia Bates, Assemblyman Bill Brough and Orange County Supervisor Lisa Bartlett for her service to the harbor and the Dana Point community.

The next association meeting in June will be run by the Dana Point Harbor Partners.

The Harbor Partners signed a 66-year lease with the county on Oct. 29, 2018, and a formal announcement was made at Coffee Importers on Nov. 2. Plans to finalize renovation have been in the works for more than 20 years.

“They had been talking about a revitalization for the harbor before I was hired,” Tilly said. “The harbor is like grandma’s house. It’s full of wonderful memories, nostalgia and love. But the structure is starting to lose its stability. The harbor is in some serious need of repairs, and it’s been holding some of these businesses back from their full potential. I understand that with these necessary changes come tough decisions.”

As for structural changes, the harbor partners are overseeing three aspects of the revitalization: commercial core, the marina and dry storage. Development will see to the reconstruction of the commercial core and the Dana East and West Marinas, two new hotels, and fully rebuilt docks.

Bryon Ward, of Burnham-Ward Properties, and Bob Olson, of R.D. Olson Development, will work together on the harbor’s commercial core.

In an interview with Dana Point Times on May 3, Ward provided an overview, as well as updates on the project. Ward began his career in commercial real estate in 1984, when he joined Grubb & Ellis Company, one of the largest commercial real estate brokerages in the nation. In 2004, he created Ward Properties, LLC, which has developed and acquired more than 1 million square feet of industrial, office, and retail properties valued at more than $75 million. Ward joined Burnham USA as a partner in 2007, where he has been responsible for strategic portfolio oversight, property acquisitions and development. Burnham Ward Properties include the OC Mix and South Coast Collection in Costa Mesa.

He says that the Dana Point Harbor revitalization will be the most complex project of his career.

“We want to make sure our plan substantially complies with the county-approved plan. Once that determination is made, we would launch into a site plan approval process,” Ward said. “We’ll fine-tune building designs, spend more time with the community in the form of workshops, sharing those designs. We already know that we want to include city council members in that process.”

Design presentations to city council are not mandated; however, Ward says he wants the process to be inclusive and transparent.

“Once the community is accepting and has an understanding of what we’re building, then we proceed in getting that approved and getting building permits,” Ward said. “We could begin construction perhaps as soon as the middle of next year.”

Part of the original county approvals for revitalization is how the construction is going to be phased. The plan is very specific, in that construction will start with parking structure itself, Ward said.

“Parking is so important, and one of our objectives is to keep the harbor open during construction, so that the public can continue to enjoy the harbor and the businesses can continue serving customers,” Ward said. “We never want to provide less parking than what the harbor needs to function. That goes for boaters, as well as the retailers and their customers.”

“Those buildings are slated to get reskinned and renovated. It will be a very substantial renovation. Depending on the condition of the building when we get there, could be extensive. We don’t want to be putting a Band-Aid on these buildings,” Ward said.

These merchants mean so much to the partners and the community, Ward said. It is a multi-phase project that keeps the harbor open during construction, and it is done with surgical precision so there is the least amount of disruption as possible.

“The merchants have played an important role in the approvals,” Ward said. “They all recognize what is here has run its useful life. The restaurants have kitchens that are obsolete and spaces that are inadequate; regardless of what it looks like on the outside, the inside is in bad condition. They want to see a new space.”

Questions remain as to which businesses will continue to open shop after construction. Ward says all of the existing businesses will have the opportunity to be a part of the new project. The key factor is whether those businesses can sustain themselves financially when rent increases.

“We are going above and beyond in our construction phasing,” Ward said. “It’s more expensive this way. It would cost a lot less to demolish everything at once and rebuild all in one phase and reopen the harbor with all new tenants. It would be impossible for these small businesses to close down and reopen after. That option is off the table and a much more cautious approach, because it is the right thing to do.”

Ward says they are allocating as much speed as possible to get changes going in an efficient manner, and the wheels are already turning.

“We have an open door policy here. We have maintenance staff available 24/7. If there’s an issue that needs to be addressed or if bathrooms need to be cleaned, we’re able to address it quickly. We’re maintaining a presence,” said Susan Lieb, Senior Director for Property Management for Burnham-Ward Properties.

In addition to the Boat Parade of Lights, the harbor hosts events such as the Festival of Whales, the Tall Ships Festival and the Turkey Trot. Ward says the partners plan on fostering and growing these events moving forward.

Tilly says that although she’s no longer part of harbor management, she’s looking forward to a new era for the community.

“We’re getting second- and third-generation members of the harbor community, and it’s time for something fresh,” Tilly said. “Our buildings are old, and businesses are being held back from being the best versions of themselves. Some shops want to do a remodel of their bathroom, but they can’t because codes have changed and it would require them to do something more extensive to meet regulation.”

Tilly wanted to acknowledge the boaters of Dana Point for their role in every step of the revitalization process and for their contributions to the Boat Parade of Lights.

“It’s all an evolution. In order to get to that next phase of progress, there needs to be change, and that can be scary for people,” Tilly said. “As for the boat parade, it’s been an incredible journey. Seeing boaters really embrace tradition and create something amazing for the community to enjoy has been so special for me to be a part of. I have no doubt that the tradition of the parade will continue, only for the 45th Annual Parade, I’ll be watching from the docks.”

According to Tilly’s email to boaters, the 45th Annual Dana Point Harbor Boat Parade of Lights for 2019 have been scheduled for Dec. 6-7 and 13-14.