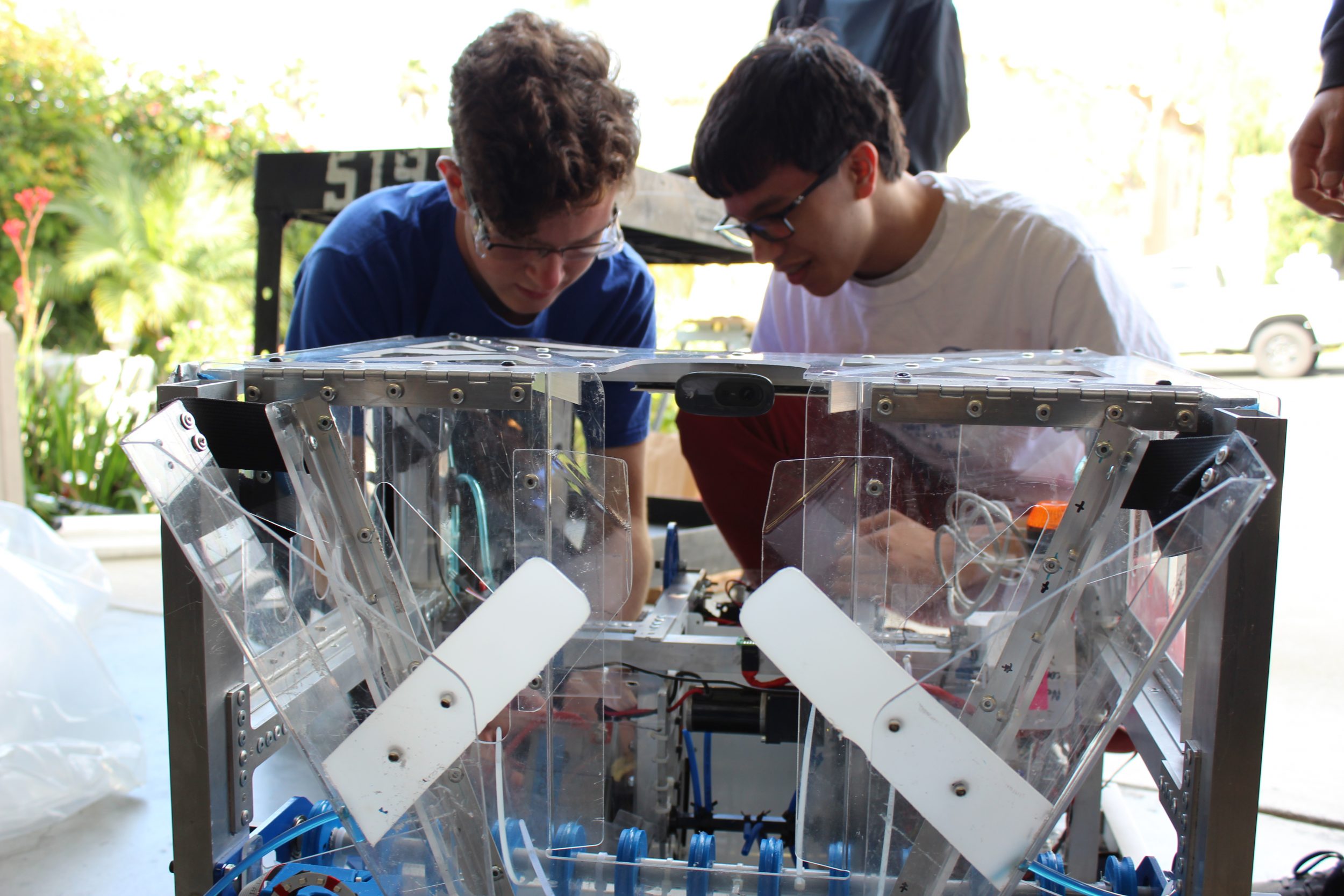 The Dana Hills High School robotics team, Robot Dolphins from Outer Space, prepares to run a demo of their robot over the weekend. The team is preparing for a regional competition in San Diego. Photo: Kristina Pritchett

Kyle Watkins, Kyle Chambers and Tommy Rinaldini talk about the six-week build process over the weekend. The Dana Hills’s robotics team is preparing for a regional competition in San Diego. Photo: Kristina Pritchett

Kyle Chambers and Kevin Jung prepare to turn their robot on during a demo over the weekend. Dana Hills’ robotics team is preparing for a regional competition in San Diego. Photo: Kristina Pritchett

Kyle Watkins, Kevin Jung and Zachary Finkelstein watch as they demo their robot over the weekend. Photo: Kristina Pritchett

The Dana Hills High School robotics team, Robot Dolphins from Outer Space, recently completed building their robot for the competition season. They will compete in a regional competition in San Diego on March 9. Photo: Kristina Pritchett

It’s a Saturday afternoon and a group of high school students are gathered inside of a garage, safety glasses on, standing over a robot.

The Dana Hills High School students often meet at student Spencer Kammerman’s house, since there’s no workspace on campus. Inside the garage, they have power tools, pieces to fit their robot, computers, snacks and drinks—all things to prepare them for long nights of working.

“We’ve been here until 2 in the morning before, especially on the weekends,” said junior Tasha Lee.

As they built a bumper to put around their robot to prevent it from getting damaged during competitions, a neighbor walked the dog and waved as they passed by.

“They’re pretty curious when they walk by,” Spencer said when asked if the neighbors are bothered by the noise. “We try to keep it down though, its quieter now that the building is completed.”

The handful of students are part of Dana Hills High School’s robotics team, the Robot Dolphins from Outer Space, which was created four years ago by another group of students.

“We started this team four years ago as a way to try and promote STEM (Science, Technology, Engineering and Mathematics) at Dana Hills,” said senior Kyle Watkins. “We wanted to offer kids here the opportunity to work with STEM and get hands-on experience.”

Spencer said the experience isn’t all about STEM however.

“It’s about going out and having fun, building cool robots, going all over and competing with the team,” Spencer said. “The whole competition atmosphere is really fun and it builds friendships.”

The Robot Dolphins are involved with the FIRST Robotics Competition, which is where high school teams compete head-to-head on a special playing field with robots they’ve built, designed and programmed.

This year, their robot needed to be able to put a gear on a peg, climb a rope and shoot whiffle balls into a goal that’s about nine feet tall.

Oh, and the robot weighs just under 100 pounds.

When asked how they even know how to build a robot, the students laughed.

“For me personally, I learned from my dad and just doing stuff around the house,” said senior Steven Perkins. “It’s helped me learn about manufacturing.”

The students are able to work with volunteer mentors, which have included engineers, teachers, business professionals, parents and more.

“Our mentors really help us and teach us a lot,” said sophomore Illeana Avila. “I’ve learned a lot about electrical work from our mentor Miles.”

Another mentor is junior team member Kevin Jung’s father, Richard Jung. He has been helping them with the build work.

“When we got the challenge, we looked at past robots and got inspiration from there,” Jung said while the group worked on Saturday.

Kyle Chambers, a junior, said the group doesn’t just focus on the construction of the robot; there’s more work to it.

“We have Spencer and Fink, who are our main programmers,” he said. “Our robot isn’t just something that sits there and looks nice, it has to be able to do stuff. There are some of us that build it and then Kyle and Illeana do the electronics for it. Everything has to get connected so there’s definitely a team effort going on here.”

The first competition of the season is coming up for the Dolphins, but they said they’re not nervous about it.

“We’ve improved a lot, not only with our robot but as a team,” Tasha said. “I think we’ll do well.”

The ultimate goal though is to return to the Championship competition.

“We want to go to champs again,” Kyle Watkins said. “That’s a big one. For being just a four-year team, and last year being a three-year team and competing against teams from all over the world, it’s a huge motivation for us.”

Along with their school work and participating in the build process and competitions, the group volunteers at the Boys & Girls Club of Capistrano Valley.

“We teach the kids FLL, which is First Lego League; it’s an elementary school level of building,” Kyle Watkins said. “We recently turned them into a competitive team.”

Not only do the members of the group enjoy what they do after school, but they hope it leads to a career.

“I think it’s important because in most areas of California, and across the country, we’ve lost a lot of our shop classes or more of the mechanical-related classes, and this is a way for people to get into the industry,” said Kevin.

FRC allows the group to learn the physical and mental work behind the scenes, but also the aspects of building community and raising funds.

Not only is the group’s work extensive, but the students look to sponsors and donations to help them be successful.

“We pulled a ton of new sponsors this year, and we’ve been sponsored by Masimo for four years,” Kyle Watkins said.

Currently, the group has a GoFundMe account to bring in donations, and they recently held a fundraiser at a local business.

Back in the halls of Dana Hills, the group was asked what it is like in today’s society to participate in this group.

“No matter where we go, if you say ‘I build robots’ people are going to say, ‘That’s really cool,’” Tasha said. “No matter the social status, everybody thinks it’s cool that you’re smart enough to do that or to have the initiative to do that.”

Kyle Watkins said the group aims to do a lot to involve the student body.

The students will compete on March 9 in San Diego. For more information about the group, visit their website at www.robotdolphins.com.