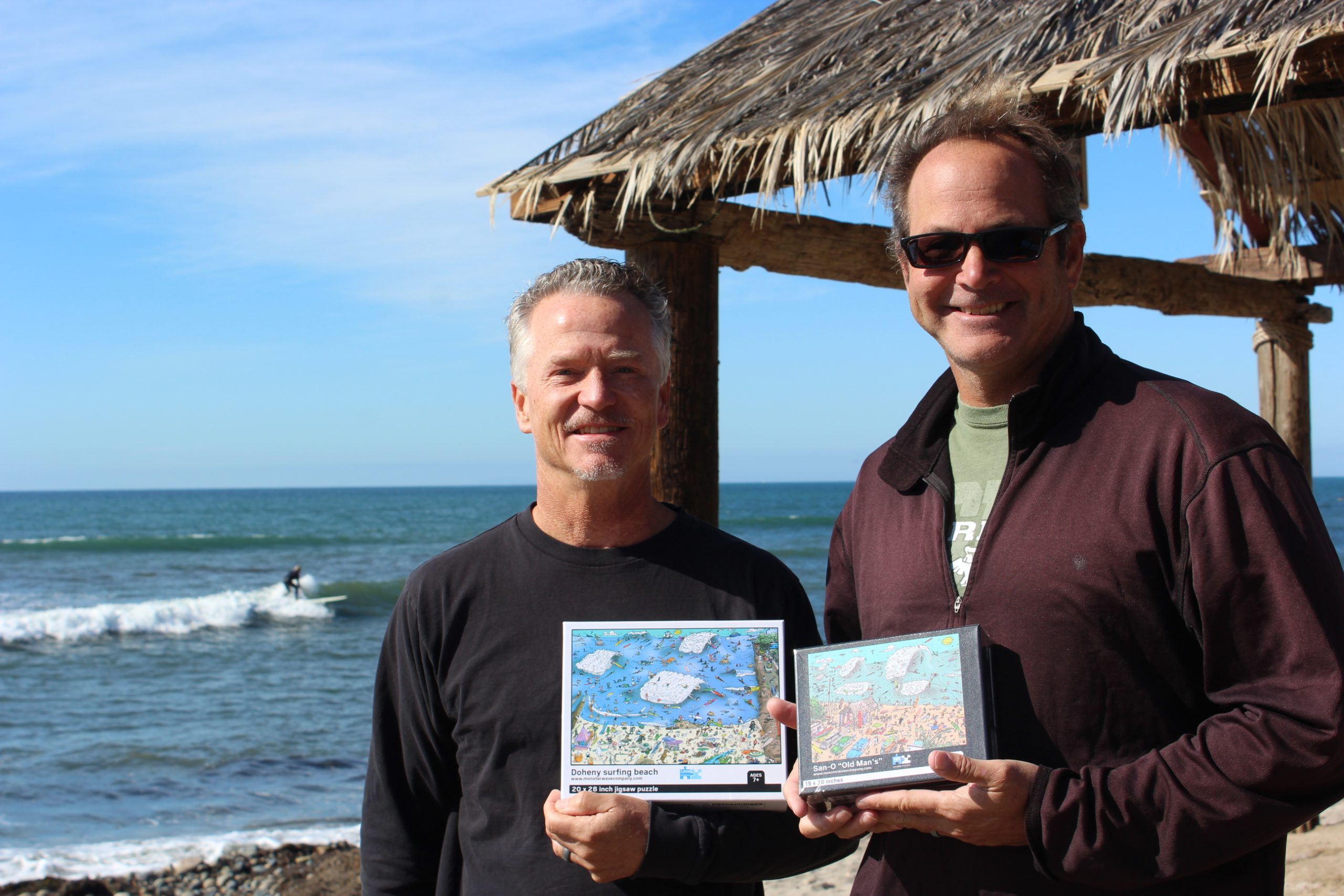 Dana Point artist Kurt Snibbe was paddling out at San Onofre State Beach when a small wave came over his board.

“This tiny wave just came over my board and slapped me on both sides of the face at once, and I was like, ‘You little devil,’ ” Snibbe recalled.

As he continued paddling through the surf, he started picturing the waves with personalities—as little monsters.

“Surfers take a beating,” Snibbe said. “That’s the one thing—everybody looks at surfing, and they see all these amazing professional surfers, and they make it look so easy, but it’s not. It’s really hard, and you take a beating … but that’s how the idea came into my mind of the monster waves.”

As a cartoonist and visual journalist for the Orange County Register, Snibbe combined two of his passions: surfing and drawing. He began sketching whimsical illustrations of the waves.

Later, Snibbe started to show drawings to fellow surfers, including his friend, San Clemente resident Norm Petersen, who had asked what he planned to do with his artwork.

“I’ll never forget the day. We were out sitting, and Norm goes, ‘So, what are you going to do with your art?’ And I said, ‘I don’t know—puzzles?’ ” Snibbe said.

It was like a light bulb went off in Petersen, Snibbe said.

“He’s just like, ‘Puzzles? I do puzzles; I’ll help you with that,’” Snibbe said.

The two had met surfing at San Onofre State Beach—a surf spot Petersen has frequented just about every day since retiring a few years ago.

“Kurt just showed up one day … and then as someone who’s there regularly, you start to develop some relationships,” Petersen said. “So, we just sort of laughed at the same jokes and had some similar sensibilities about life and family and stuff like that.”

“This sort of evolved organically for us between my business background and his artistic ability,” Petersen continued. “It was a really good fit.”

The two began “noodling” with the puzzles idea conceptually in May, had a company formed by July, and shipped out their first order in October.

The first puzzle that Snibbe and Petersen released through their new company, Monster Wave, was a depiction of the Old Man’s surf break at San Onofre State Beach.

“When we started, we were thinking the application would be primarily surf shops,” Petersen said. “If you go into a surf shop and you find a puzzle, it might be a deep sea scene with a bunch of fish; I’ve seen the Grand Canyon puzzle in a surf shop, so we felt like there was a nice niche for actually iconic surf spots in the form of a puzzle.”

When drawing his whimsical illustrations, Snibbe begins with an outline.

“I’ll have a few monster waves that I start with and gradually they’re getting more and more detailed,” Snibbe said.

“But the puzzle is—it’s kind of weird, because I can’t explain why there’s a cowboy in a Speedo playing horseshoes with his horse on the sand, and why there’s a chicken there, and there’s a guy in an inner tube there,” Snibbe continued, explaining how the ideas for his art come to him. “It’s just stuff that pops into my head, and I’m off to the races with my pencil.”

Eventually, Snibbe and Petersen would like to design puzzles of surf breaks up and down the California coastline. The two said they hope to release their next puzzle, depicting Doheny State Beach, by Dec. 1.

The two will be donating a portion of the proceeds from every puzzle sold to the San Onofre Parks Foundation.

“I’m excited about our future, because we’re going to keep doing puzzles, but have these other extra added things that hopefully people will embrace,” Snibbe said.

“My imagination is running wild with it now,” Snibbe continued. “I still look at waves constantly; I want to do more animations and things like that, because I think there’s a lot of room for fun; that’s where it all ignited. A 1-foot wave that beat me down.”