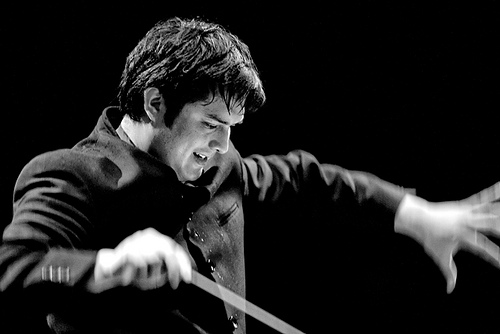 In celebration of the 2015 “One World” season of the Dana Point Symphony Orchestra, the DP Times has been featuring a series of question and answer articles and and artist bios to introduce Dana Point audiences to some of the musicians of the DPSO.

This week we are talking with Music Director and Conductor Dean Anderson.

Anderson, music director for the Dana Point Symphony and Symphony Irvine, has been living and working as a music director in Southern California for more than a decade. He is also the director of orchestral studies at La Sierra University.

Anderson studied conducting at the University of Missouri-Columbia. Currently, under the mentorship of Neal Stulberg, he is earning a Doctor of Musical Arts degree in Orchestral Conducting at UCLA.

DEAN ANDERSON: I was immediately attracted to the sound of the violin as a child. I first heard “Eine Kleine Nacht Musik” by Mozart when I was 5 and I just had to be able to play that music myself.

DA:  My musical style is constantly evolving but I have always been influenced by conductors from the mid-20th century—Herbert von Karajan, Eugene Ormandy and Leonard Bernstein. They brought such unique interpretations to their performances. Bernstein was able to make the music work in slower tempos, bringing out deeper emotions in the smallest phrase. I admire Ormandy’s lush orchestral tone in all of his recordings.

DA: I like the fresh energy and musicianship of the orchestra members. They always have a great attitude during rehearsals. While they bring such a high level of artistry to the performance, they are also flexible and always ready to try new things outside their comfort zone.

DA: “Mahler Symphony No. 2,” Ella Fitzgerald singing “I Got Rhythm” and “Let it Be” by the Beatles.

DPT: Describe your musical career in 10 words or less.