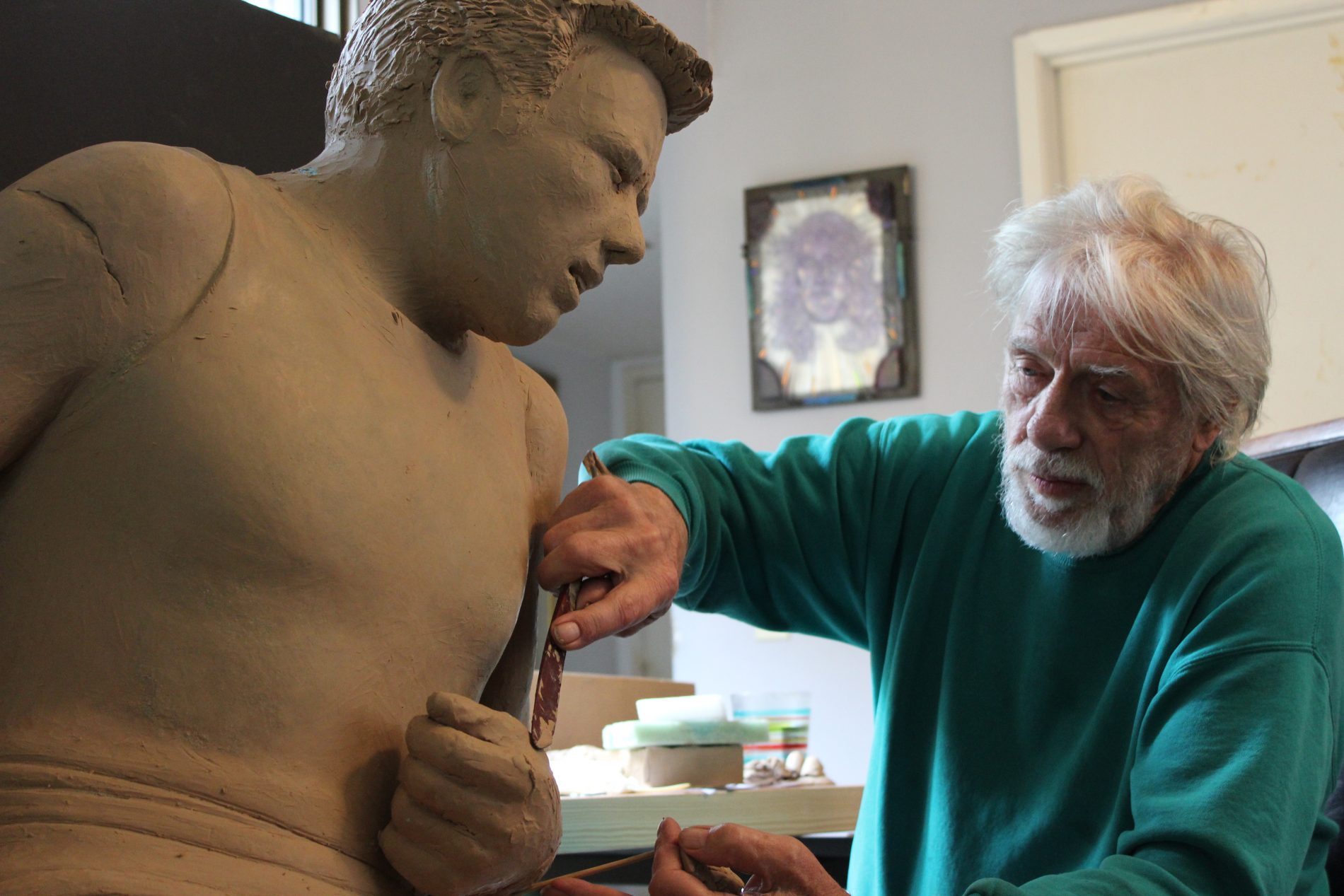 Inside his Dana Point home, artist Lance Jost works on the hands of his newest sculpture. Around him, his artwork adorns the walls in the forms of surfboards, mythological sculptures and paintings.

Jost is currently working on a life-size sculpture of Hobart Alter, otherwise known as Hobie. It’s set to be placed in Linear Park as part of the South Cove development off Pacific Coast Highway and Del Obispo.

“He was such an important figure around here,” Jost said.

Jost has been working with the Hobie Memorial Foundation, a nonprofit dedicated to constructing a memorial honoring Hobie’s life and his contributions, to bring the sculpture to life.

“There was great enthusiasm, everybody saw the importance of this,” Jost said.

Jost has previously worked on a couple other pieces in the city. In 2009, the pedestrian bridge over Pacific Coast Highway officially opened with two mosaics created by Jost underneath.

“I heard they were going to build a bridge off Coast Highway, and I knew they were planning on having photographs,” Jost said. “I know the photographic process, and I knew it could be expensive.”

He said he wondered why they wouldn’t have a local artist create a mosaic, so he pitched his idea.

His two pieces include one inspired by a photograph of a whale breaching in the Dana Point Harbor.

“Fortunately I had the ear of the people and they went for it,” Jost said. “It’s wonderful because not only does it encourage (local recreation) but it promotes the arts.”

Jost’s next piece was unveiled to the city in 2011 in La Plaza Park. Jost and landscape architect Yvonne English created the Mary Ellen Thomas Memorial Fountain.

“Since I knew it was going to be right in front of the Hobie store, I thought how fitting it would be to include sculptures of surfers into it,” Jost said.

The fountain not only includes surfers, but Jost said the city wanted to see local marine life incorporated into it, which Jost researched.

What makes Jost’s mosaics unique is his technique—ordinarily mosaics are made out of little pieces of glass arranged together, but because Jost is a sculptor, he carves pieces, molds them and casts them into glass.

Jost’s work expands outside of the city’s limits. In San Juan Capistrano, he created the 15 Stations of the Cross piece at Saddleback Church. Jost also created a mural inside Jimi Hendrix’s recording studio in New York City almost 50 years ago.

“I met with Jimi Hendrix’s manager and showed him my portfolio and talked to him about doing the credits for [a surf] movie,” Jost said. “He saw all my pieces that I painted of space, and he said Jimi wanted a mural in his recording studio in New York City.”

He joked there was no surfing in New York City but it was an experience he’d never forget.

“I found myself in Greenwich Village,” Jost said. “I ended up being there for nine months while I stretched a big canvas in a loft we rented. It was 100 feet long, floor to ceiling.”

Jost said the finished piece makes it look like you’re standing in a space ship and looking out.

He uses his Dana Point home as his workshop and has created multiple pieces there.

“I made a large horse that was cast in bronze with a warrior on his back,” Jost said and pointed to the middle of his living room. “We built it right here.”

When asked how they could get the large piece out the door, he laughed.

“We had to cut it up and carry it over the neighbor’s fence,” Jost joked.

Zephyr, the developer of South Cove, officially broke ground earlier this year, and the new statue could be installed as early as the end of the summer.

Recently, Director of Community Development Ursula Luna-Reynosa spoke about the park during the Dana Point Civic Association’s Coffee Chat. She said the park will celebrate California’s history along with Dana Point’s role in the region.

Jost said not only did Hobie change the surfing industry, but the skateboarding industry as well.

“To me, this is what Hobie is about,” Jost said. “I realized when he passed, it was incredibly important to commemorate him for his accomplishments.”

Jost is working with Robbie Roberson, owner of Spartan Marine and Hobie Memorial Foundation director, who originally worked on the Hobie Cat with Hobie himself, on the actual catamaran for the sculpture.

Together they’re making sure Hobie is sculpted to sit on the boat just right. He’s also invited Hobie’s family over to make him as realistic as possible.

“Although I knew him, I wasn’t with him day in and day out and pretty much have to rely on photographs to get his image,” Jost said. “Photographs are very difficult without people who knew him well to show me things that they think need to be brought more into mind.”

David Baer, his art representative, said the work Jost is doing will be a talking point for years to come.

“It gives a centralized point to the story, it all happened right here,” Baer said.

Jost nodded and added this will add to the identity of Dana Point.

For more information about the Jost, visit www.lancejostdesigns.com.