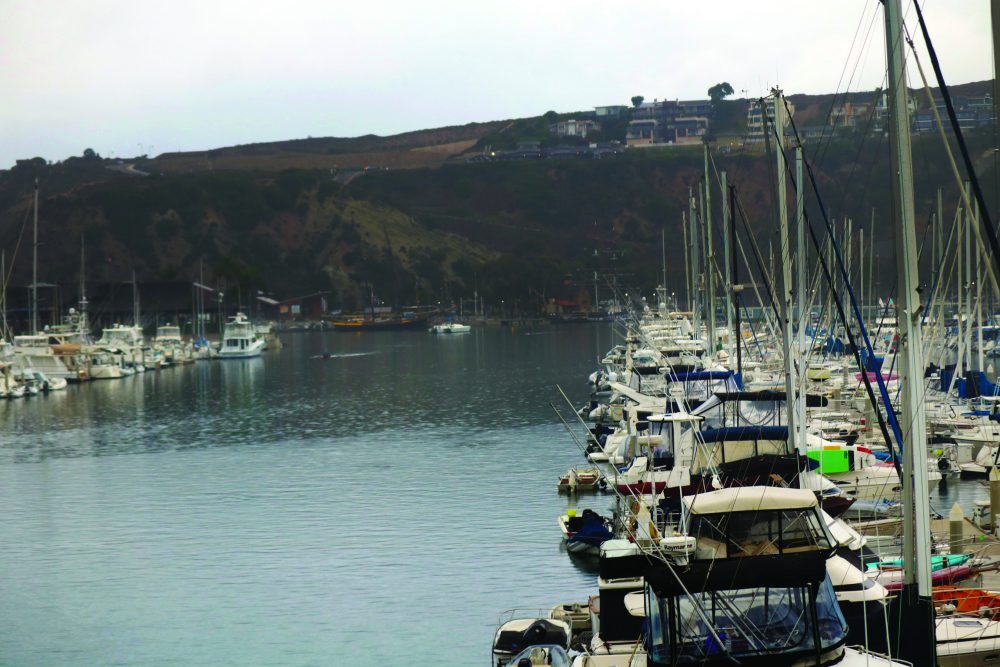 Plans to restructure and revitalize the Dana Point Harbor’s marina have been submitted to the California Coastal Commission. Now the Dana Point Harbor Partners are working to address the commission’s feedback and anticipating a hearing before the agency by summer of 2020—hopefully.

Joe Ueberroth, of Bellwether Financial Group, will restructure the marina, while Bryon Ward, of Burnham-Ward Properties, and Dustin Schmidt, of R.D. Olson Development, will work together on the harbor’s commercial core.

The lessees, known as the Dana Point Harbor Partners, took over a 66-year lease to manage the harbor and oversee redevelopment in an agreement with the County of Orange. Efforts to revamp the harbor were about 20 years in the making. The renovation is anticipated to cost about $330 million.

The Dana Point Harbor was established in 1961 as a safe harbor in the coast of California, and the stretch of land was entrusted to the county in accordance with the Dana Point Tidelands Act.

“. . . Lands shall be used by said county, and its successors, only for the establishment, improvement and conduct of a harbor, and for the construction, maintenance and operation thereon of wharves, docks, piers, slips, quays and other utilities, structures, facilities and appliances necessary or convenient for the promotion and accommodation of commerce and navigation, and for recreational use, public park, parking, highway, playground, and business incidental thereto,” the act says.

James Lenthall, the president of the Dana Point Boaters Association and the chair for the Dana Point Harbor Advisory Board, says it’s important to keep consistent with that mission.

“Shops and restaurants can be a vital component to a harbor. But it’s crucial to us that those things exist to serve the boater, and not the other way around,” Lenthall said.

Looking Back and Looking Forward on Marina Revitalization

Ueberroth’s resume in marinas, particularly in Newport Beach, led Ward to approach him about working on the project. Ueberroth had worked in the hospitality industry, marina management and business prior to the harbor lease acquisition.

The Dartmouth University graduate had founded investment company Bellwether Financial Group in 1997 and Bellport Group in 1998—a joint venture company that continues to operate marinas in locations including California and Japan. Ueberroth joined the board for Bellingham Marine—a marine construction company—in 1997 and acquired the company in 2006.

While there haven’t been slip rate increases, within months of the lease being finalized, the partners moved forward in adjusting cost calculations for overhang allowance (or the length a boat’s size exceeds a slip). Prior policy had allowed for a three-foot overhang allowance. Extra costs are calculated for six-inch increments that exceed the limit.

In DPHP’s agreement with the County, slip fees will be calculated by the length of the slip or the overall length of the vessel, whichever is greater. Even if the rate per foot remains the same, boaters whose vessels exceed the length of their slip were notified that their rate is increasing commensurate with the amount of their overhang.

The Dana Point Boaters Association addressed an increase in slip fees for overhang costs in its Dec. 5, 2018 newsletter.

“DPHP is calling this a slip rate ‘correction.’ Though this slip rate formula is the standard across most marinas, DPHP was not contractually obligated to implement these adjustments immediately, and doing so in their first month on the job has sadly earned some ill will among those impacted,” the newsletter stated. “We would have preferred at least 30 days’ notice with perhaps a January 1 implementation date.  Even better, they should have demonstrated visible, tangible improvements to the boater experience under their watch before asking anyone for more money.”

Ueberroth says the implementation disproportionately impacted smaller boats, which was an unintended consequence.

“It was unfortunate that one of our first implementations (as lessees) was not well-received,” Ueberroth said. “What we’ve tried to do is make sure we are fair, and we follow through on our commitments.”

Ueberroth says that measuring boats and adjusting slip fees was meant to ensure costs and fees were rolled out fairly and accurately.

Another one of the first initiatives the partners set out to do since taking over the lease in November was to improve the slip waitlist. Previously, there were two separate waitlists for the east and west marinas. Under the partners, the two lists were combined. Names were combed through to ensure those on the list still had desire for a slip.

For many years, boaters have been able to bypass the waitlist through brokers, LLCs and trusts. Lenthall says this aspect of boating culture has likely added years to the waitlist.

“If an LLC owns a boat, and you sell a share of the LLC to somebody for coincidentally the market value of the boat, that’s now a concealed financial transaction that helps the buyer of the LLC share now become the owner of the vessel,” Lenthall said. “This is not a criminal act, but it’s certainly a violation of the slip license agreement.”

Lenthall says he doesn’t think there’s a boater in this harbor who doesn’t know someone who has done this or has done it themselves.

“This part of the slip license agreement has not been properly enforced. It’s so common that I think a lot of people who have done it think it’s a legitimate transaction,” Lenthall said.

Last fall, the partners offered an amnesty period that allowed for boaters who obtained their slip this way to confess and modify their slip license agreement.

“We’re working really hard to ensure that when people leave this harbor, the person that gets the next space is the person on the waitlist,” Ueberroth said. “It’s been traditional for people to circumvent that system by buying a boat, obtaining a slip, utilizing an LLC and selling their boat without declaring it’s been sold. We’re going to make sure that those transactions do not continue in the future.”

The partners submitted plans for the marina to the CCC on Aug. 23 and have since received comments back from the agency.

“We’re hoping to be put on the agenda by summer 2020,” Ueberroth said. “The comments were asking for more specifics, in several different areas, and from our experience, we see that as typical. No comments came as a surprise.”

Ueberroth says he has partnered with developers who have built more California coastal facilities than all his competitors combined, and that he has experience designing facilities that adhere to what the Coastal Commission requires.

Construction for the new marina will be split into 18 phases. Boaters with tenure will get priority in selecting their new slip.

The new design, if approved, means a loss of 150 slips.

“The (CCC) initially recommended that the goal be to aim for zero slip loss,” Lenthall said. “But with new regulations and in order to be ADA-compliant, some slips had to go.”

The average slip size will increase from 30 feet to 32 feet.

“We’re losing some slips, but not for any other reason than to accommodate current regulation and demand,” Lenthall said. “You could significantly eliminate smaller slips to build 40-foot slips and make more money. But this is an affordable-access harbor. And the Coastal Commission affirmed this is a small boat harbor in 2009 by limiting the average slip size to 32 feet.”

Ueberroth says the marina will have rounded fingers (or docks) to allow for easier, safer docking of a boat. Cornered edges can cause damages. There will also be no steel used in construction, and Wi-Fi will be available for boaters to access.

“Wi-Fi is a unique process to bring to boaters,” Ueberroth said. “But we’re going to work diligently to bring that even prior to redevelopment of the harbor.”

Most marinas are on public land, county or city.

“Coastal Commission will have due process and hold public hearings. We believe we have listened and collaborated with the community,” Ueberroth said. “The vast majority of the comments we get are to ‘please move forward fast.’ ”

The partners had originally included both the waterside marina redevelopment and the Embarcadero dry storage into one project. However, Embarcadero was removed from the submission.

“We believed Embarcadero was more tied to the commercial core,” Ueberroth said. “The next step is to get permits (from the county) to extend day boater parking.”

“We’ve worked hard to listen to the community and design something the community wants to see,” Ueberroth said. “One of our biggest commitments is to rebuild this harbor, and we’ve dedicated a lot of resources to make sure we’re moving quickly through that process. Boaters have waited decades for this to happen; they’re very anxious to have a new harbor.”