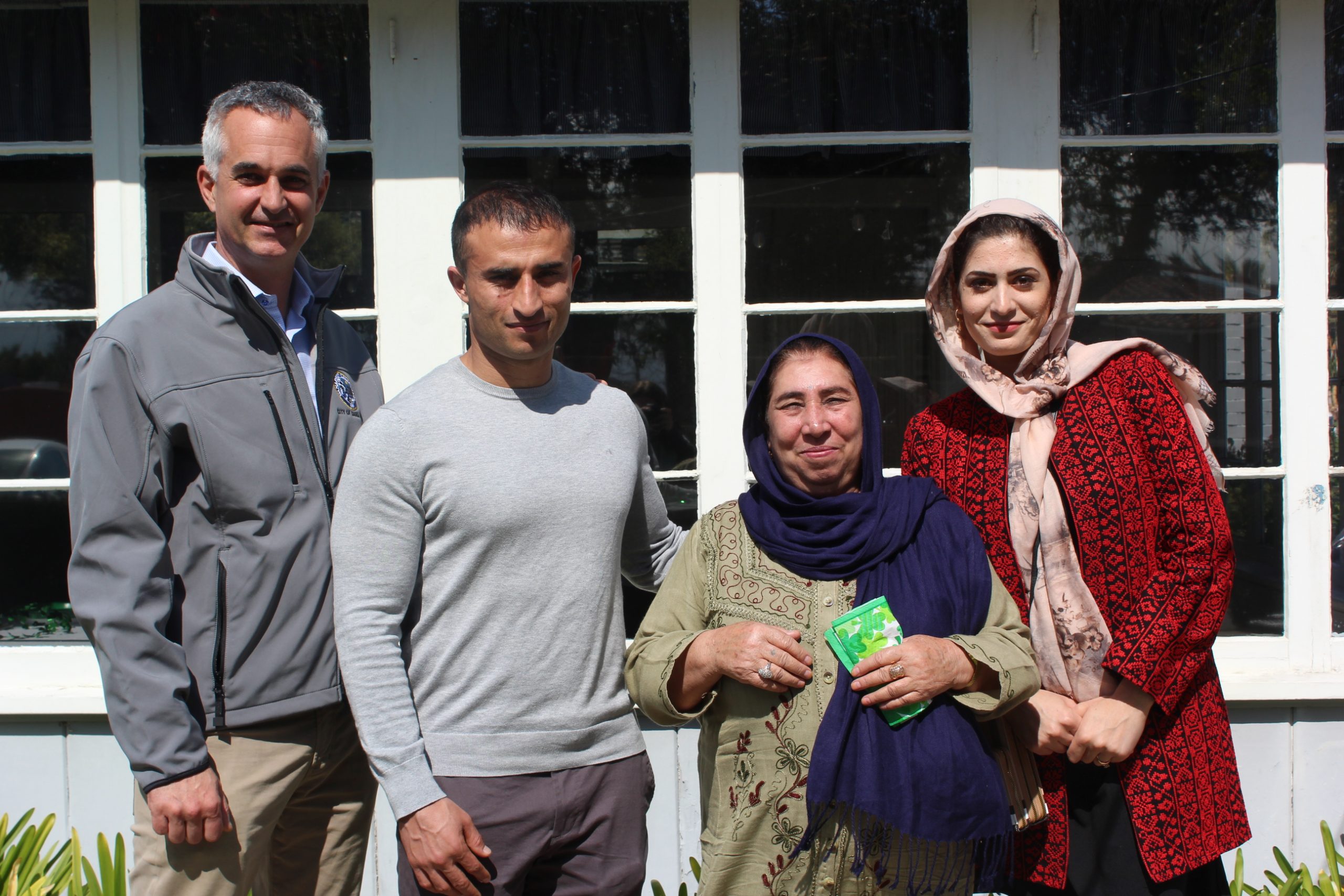 In late August 2021, as U.S. troops began to withdraw from Afghanistan and Taliban fighters entered the capital of Kabul, Farid Zahiri and Dana Point Councilmember Jamey Federico were working tirelessly to bring Zahiri’s wife and mother to the U.S.

It wasn’t until late November, just before Thanksgiving, however, that Zahiri could be reunited with his wife, Wajmah, and his mother, Ziba. The two had endured long plane rides and extended weeks in foreign countries before finally landing in Southern California.

To welcome the women after they had arrived in the U.S. with little more than the clothes on their backs, the Dana Point Women’s Club launched “Project Welcome” and began gathering donations. The women’s club gave Wajmah and Ziba more than $2,000 in cash donations, gift certificates and beauty supplies.

Earlier this month, the Women’s Club invited Federico, Zahiri, Wajmah, and Ziba to its regular monthly meeting to share their story.

Zahiri was Federico’s translator when he was stationed in Lashkar Gah in Afghanistan. In 2012, Federico, a retired U.S. Marine who served in the military for more than 20 years, advised Afghan military leaders.

“So, for hours every day, Farid was over my shoulder, not only interpreting everything that the Afghans were saying but also, in the meantime, adding his narrative as to what that might mean culturally,” Federico said. “And sometimes, he wouldn’t even interpret what they would say, but he would say, ‘Hey, watch out for that guy over there.’ ”

As the U.S. mission in Afghanistan began to wane, it was clear from the military’s experience in Iraq that interpreters would be in danger, as they would be labeled as U.S. sympathizers. So Zahiri applied for a Special Immigrant Visa Program.

Federico’s wife, Alexis Federico, had been doing pro bono work as a law student for the International Refugee Assistance Project. Under the oversight of a licensed attorney, Alexis was able to take Zahiri’s case and facilitate his immigration.

When Zahiri gained approval to come to the U.S., he stayed with the Federicos in Dana Point for several months while he adjusted to American life.

“We felt a responsibility to try to make sure that Farid could achieve the American dream and be successful here,” Federico said. “And one of the first things we said to him was, ‘Before you get married, make sure you finish your school, become financially independent and probably get your citizenship. Do all those administrative things to be successful before you get married.’ ”

Zahiri worked at a security job and then was hired to do sales for Verizon—an opportunity, he said, that helped him learn a lot about the culture and current events in Southern California. He’s since earned his Associate Degree at Fullerton College and gained citizenship. Zahiri moved to Anaheim with friends to start off on his own.

One day early last year, Zahiri let the Federicos know that he was going back to Afghanistan to get married. He went back in May of last year and married Wajmah. Following his return, the couple proceeded to fill out the necessary paperwork to allow his wife to immigrate to the U.S.

“He applied for all the immigration paperwork that normally would take 18 months to two years or more; it can take as long as three years under normal circumstances for a spouse of a U.S. citizen to come over here from a country like that,” Federico said. “So, two months into that two-year waiting period, the country fell apart.”

By August, Taliban fighters had entered Kabul. The Afghan president fled the country, and U.S. diplomats were evacuated from the embassy by helicopter. Thousands of interpreters and their relatives were left behind, including Zahiri’s wife.

Zahiri and Wajmah still had a difficult decision to make: Should they risk an attempt for her to get to the airport without any guarantee she could get into the U.S.?

Huge crowds waited at the airport in Kabul trying to make it on a flight out. Each day, the threat of an attack on the airport intensified.

At 2:30 in the morning on Aug. 24 in Afghanistan, Zahiri called to let Wajmah know that if she was going to leave Afghanistan, she would have to make it to the airport that day. Wajmah’s brother took her and Zahiri’s mother, Ziba, to the airport.

The Federicos and Zahiri gathered as much information as they could on which entry points and which gate they should use. Certain access points, they were told, were being controlled by the Taliban. Zahiri’s wife would need to be strategic in her arrival.

They put together a plan that Wajmah would carry a sign in the airport crowd that U.S. snipers could watch out for to help find her and get her to safety.  She was told she needed to get to the Abbey Gate by 6 a.m. The next day, Aug. 26, the Abbey Gate was the site of a deadly suicide bombing attack that killed 13 U.S. service members and 170 Afghans.

When Wajmah, her brother, and Ziba reached the airport, they had arrived at the wrong gate. They finally arrived at the right gate at 9 a.m., and U.S. Marines were able to locate them.

“She got inside, and she was really feeling really sad and tired and nervous, anxious,” Zahiri said, translating for Wajmah.

She asked the lieutenant helping her if he could bring Zahiri’s mother inside. Wajmah’s brother and Ziba had already begun to leave the airport when they were told that Ziba could leave Kabul with Wajmah.

Ziba had accompanied Wajmah to the airport, expecting to see her daughter-in-law off and never see her again. She left her house with the clothes on her back; no purse, cell phone, passport or ID. Marines at the embassy in the country of Georgia were able to process and create a passport for Ziba.

The two were given bracelets designating that they were cleared to leave and were put on a C5 cargo plane. The plane was packed with about 430 people, Zahiri said. There were no seats.

Ziba had never been on a plane before, though she had lived near the airport. Zahiri explained that each time planes departed, his mom would wonder what it would look like to be inside of one. Ziba was really scared, Zahiri said. The plane was crowded with lots of military, kids, and journalists.

From Kabul, Ziba and Wajmah arrived in Qatar. They were there for a week without internet or phone connection before they were flown to Germany, where they spent another 20 days on a military base. Their journey from Germany to Virginia took more than 20 hours, flying to New Jersey and then taking a bus to Quantico.

Once in Quantico, they began the process of getting identification, medical examinations and vaccinations before they could fly to LA. Wajmah explained that they were able to comfort each other along the journey.

“They had about a three-month long adventure through Qatar, Germany, Quantico, Virginia, before finally making it here in November of last year, right before Thanksgiving,” Federico said. “This community and the Women’s Club have been terribly gracious and generous. We’re just thankful that this wonderful family is together.”

After traveling a total of about 100 days—from Kabul to Qatar to Germany to Virginia to California—Wajmah was reunited with her husband, Zahiri.

Jamey and Alexis Federico were at LAX to welcome Ziba and Wajmah. The Dana Point Women’s Club had loaded up the Federicos’ car with the donated gifts for the two women

Calling America “Flowerica,” Ziba explained that she adds “flower” because it’s such a beautiful place. Everything is green, the weather is beautiful, people are very welcoming, and they’re open-minded and willing to learn and listen, Ziba said.

Zahiri is now trying to expand his small business installing security surveillance cameras while continuing to translate for his wife and mother. Wajmah is working on getting her driver’s license and taking English as a Second Language courses at Santa Ana College.