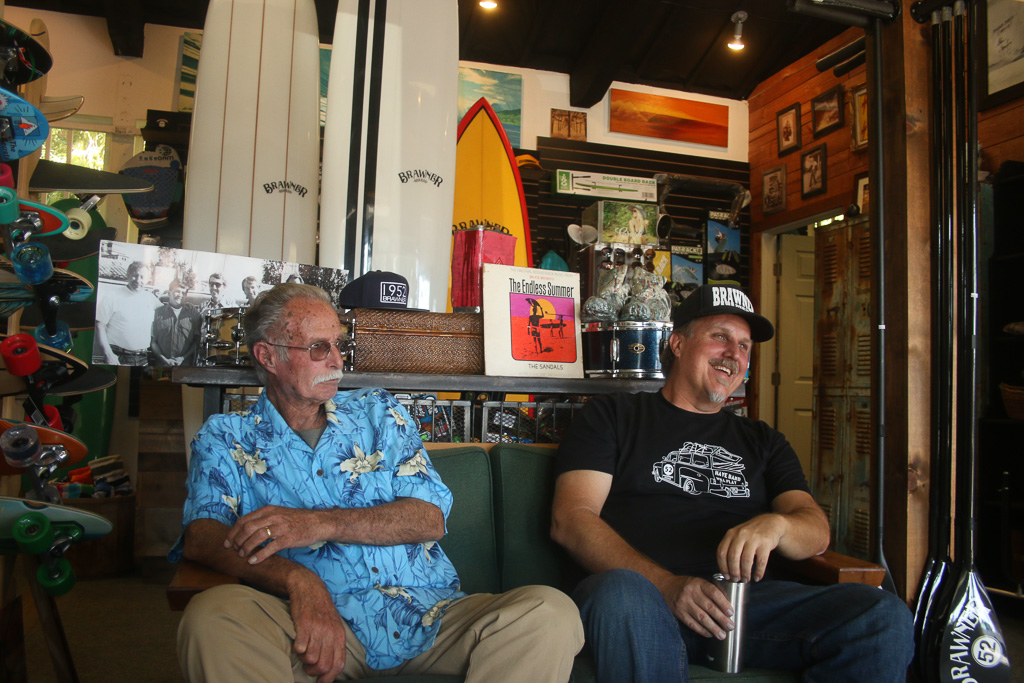 Looking to get a little of that old-fashioned surf stoke going into what is sure to be a unique holiday season? Damian Brawner and the crew at Brawner Boards are planning just the thing to get you in the spirit.

On Sunday, Nov. 29, they’re hosting their inaugural Vintage Board Auction.

“My dad used to do these back in the day, and they were always more than just a chance to pick up a classic old surfboard; they were something that brought the surf community together,” Damian Brawner told the San Clemente Times.

A little backstory before we proceed. Danny Brawner, Damian’s father, who recently celebrated his 81st birthday, was one of the original surfboard glassers at the old Hobie factory. Along with the small crew that helped make the legend of Hobie what it is today, Danny has probably glassed more boards than just about any other human on the planet.

Not only bringing joy to the people through his craftsmanship, Danny was also the drummer for the surf band The Sandals (originally The San Dels before they changed their name, because nobody got the pun), which supplied the iconic tunes to Bruce Brown’s seminal surf film The Endless Summer.

“We used to rehearse in the garage of a house above T-Street,” recalled Danny in a recent conversation. “Bruce was walking up the hill after surfing one day and stopped by to listen. He asked us if we’d be interested in recording some music for a movie he was working on, and that’s pretty much how that happened.”

The story goes that the band cut the soundtrack in one day up in L.A. at Miles Davis’ studio, with each musician receiving a paltry $50-a-day rate for their services. In one of those unfortunate entertainment deals, the band never received any royalties from their work on The Endless Summer soundtrack.

But I digress; back to the upcoming Vintage Board Auction.

The event will have both a live and digital component, with more than 50 boards on the block. From classic Corky Carroll model Hobies, to other iconic labels such as Harbour, Bing and Aipa, there will be some real classics on offer, as well as a few interesting transition era mid-length designs that are so in vogue at the moment, plus a couple beautiful Velzy originals.

“We’re trying to offer a variety of different boards, because everybody’s got their thing they’re into, and we want to make sure there’s something for everyone,” Damian Brawner said. “The Velzys really stand out to me, but we’re going to have a lot of other cool stuff, too.”

Registration for the auction is $25 and includes a gift bag and lunch (if you attend in person). There will also be live music, food and other surf collectibles.

Beyond organizing the auction, Brawner has been busy the past few months updating his shop in the Shorecliffs neighborhood (near the DMV office in San Clemente). He’s also launched a new YouTube channel called Rhythm and Resin.

At the moment, he’s hosting two different shows out of his shop. One is called In Session, hosted by Mitch Colapinto, that features fun, candid conversations with local surf stars and other interesting humans.

The other show is called Launch Pad, hosted by Grace Freeman, that is dedicated to shining light on the musical talent in this area. Both shows can be watched on YouTube and are worth your time if you’re looking for something entertaining that has a connection to this area.

“We’re trying to think of our shop not just as a place to get a new board or something, but also as a gathering place for the community,” Brawner said. “Mitch is doing his thing, which is killer and mainly focuses on the youth around here. And the music show taps into another part of our community, and given my dad and I are both musicians at heart, it’s a really fun way to tie everything we’re doing together.”

For more details and registration information, go to brawnerboards.com, and to check out their latest video drops, subscribe to the Rhythm and Resin channel on YouTube.