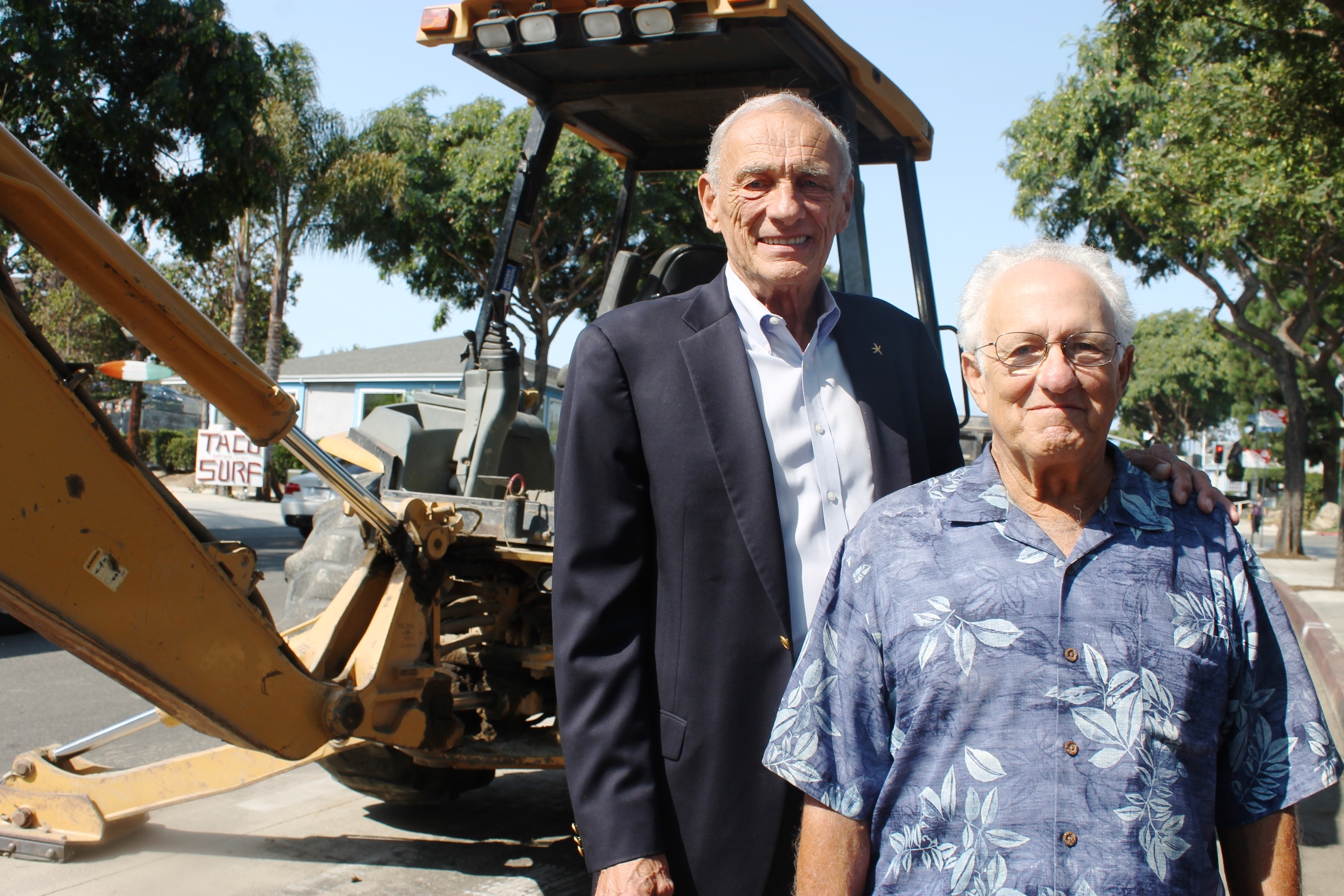 A snapshot of stories that made headlines this past year

By the Dana Point Times

Dana Point made plenty of headlines in 2013 and shepherded in several changes likely to have lasting impacts on citizens, visitors and the city’s overall landscape.

While the city’s $19 million Town Center revitalization project saw its long-awaited groundbreaking, aside from story poles, surveying and zoning suggestions, revamp efforts for the Dana Point Harbor and Doheny Village saw little outside movement this year.

Development has provided some of City Hall’s most contentious debates as efforts to relocate the downtown post office failed, a hotel developer asked for a height variance and officials moved to sell unused parkland. The city remained embattled in litigation with the California Coastal Commission and Surfrider Foundation over gates and hours of access to Strand Beach, as well as a handful of former medicinal marijuana shop members for imposed zoning regulations, dating back to 2009.

The city also saw the return of the Dana Point Symphony, record-breaking crowds at the two-weekend Festival of Whales, the opening of the Ocean Institute’s Maddie James Seaside Learning Center and welcomed dozens of colorful Asian elephant sculptures for a 10-week show.

Here are just some of the highlights 2013 brought.

Whale of a Walk: Coming off a six-year migratory hiatus, whales once again donned the walkways of Doheny State Beach. A California gray whale returned in early January and was joined by orca and humpback whales, as volunteers armed with paintbrushes and rollers took to their pavement canvas to paint life-sized portraits of the marine mammals.

Gateway Groundbreaker: Dana Point broke ground on its first Town Center related project since the California Coastal Commission approved the $19 million revamp in 2008. The retro-fitted sign received mixed reviews and left many wondering what the sign was welcoming visitors to. Later in the month, the Dana Point City Council unanimously approved a phased construction plan to kick-start project.

Good to Have Friends: After a three-month closure, Friends of the Dana Point Library board members agreed to a licensing contract with the county library system allowing the nonprofit to reopen its bookstore. The store was closed November 1, due in part to unresolved issues between Friends factions.

Rising Bus Rates: Commuters utilizing public transportation saw a 20 percent increase in Orange County Transportation Authority rates, with adult fares rising from $1.50 to $2, day passes from $4 to $5 and 30-day passes jumping from $55 to $69.

I-5/Ortega Construction Begins: After more than a decade of planning and preparation, Caltrans broke ground on its $86.2 million Interstate 5/Ortega Highway Interchange project.

Teachers Take Top Honors: Dana Hills environment science and oceanography teacher Randy Hudson received top honors from the CUSD Board of Trustees. Hudson along with two other educators where named the district’s teachers of the year.

Water District Gets it Moving: The South Coast Water District Board of Directors unanimously approved moving ahead with a $5 million infrastructure project for Town Center’s future development, including replacing water and sewer lines down Pacific Coast Highway and Del Prado Avenue.

History has a Home: The Dana Point Historical Society was welcomed into a new museum space at Dana Point City Hall, featuring original plans and notebooks of the city’s planner, Sidney H. Woodruff.

Plastic Bags No More: Phase one of Dana Point’s ban on single-use plastic shopping bags went into effect on businesses with annual taxable sales exceeding $4 million, like Ralphs, Smart & Final, Albertsons, CVS and Chevron. The plastic bag ban for other businesses rolled out in October.

Short-term Rentals get Regulated: After years of debating the legality of vacation rentals, and the city’s absence of enforcement, City Council adopted an ordinance permitting and regulating short-term rentals, of less than 30 days, in a 4-1 vote. Such rentals are now subject to the transient occupancy tax, a 10 percent bed tax and the city’s largest source of revenue. The ordinance rolls out January 2014.

Grassroots Pressure Builds: A band of citizens, with years of experience in local government and business, pressed city officials to act on Town Center. Members of the Dana Point Town Center Organization held a series of meetings and made powerful pleas to the City Council to get the revitalization project moving.

SONGS Permanently Closes: Southern California Edison announced it will permanently retire the San Onofre Nuclear Generating Station, which had been shut down since January 2012 due to a small leak found in the Unit 3 reactor.

Doheny Revamp Zoning: ROMA Design Group, who is also working on Town Center facelift plans, suggested the city alter zoning established in 1989 to better fit their view for future Doheny Village development. City staff said their hope was to have plans to the council before 2013’s end.

Textbook Denial: The CUSD Board of Trustees declined to purchase new textbooks for a new Advanced Placement World History class at Dana Hills and Capistrano Valley high schools after board members objected to both the content and quality of the text.

Trolley Receives Funding Boost: Dana Point was approved for a $2.45 million OCTA grant to create and maintain a summer, weekend and special events shuttle, expected on the roads early next year.

Poche Pollution Woes: After months of good bacteria readings, summer news was mixed at Poche Beach, as pollution levels had the waterfront jumping from low to high Heal the Bay letter grades. Throughout the year, county officials used ultrasonic devices, a falconer and coyote decoys to ward off seagulls, the believed primary pollutant.

Beach Fires Targeted: In a narrow 7-6 vote, the board of the South Coast Air Quality Management District placed restrictions on fire rings on beaches throughout Orange and Los Angeles counties. Initially SCAQMD staff proposed a blanket ban on all beachside fires and rings, but allowed wood burning fires in areas with a 700-foot buffer and 100 feet between each pit.

Harkey Pays $10 Million: Investors involved in a lawsuit against Orange County real estate lender Dan Harkey, husband of Assemblywoman Diane Harkey, were handed a victory when a jury awarded 40 plaintiffs more than $10 million in damages. Harkey was accused of defrauding investors—many of whom are elderly—out of more than $43 million.

King of the Pacific: Yossymar Rojas continued his winning ways by being named the Boys & Girls Club’s Pacific Region Youth of the Year. With the win, Rojas earned another $15,000 scholarship and a place in the club’s national competition.

Seeking Higher Opinion on Strand: Dana Point filed a petition for review with the California Supreme Court regarding gates and hours of access at Strand Beach. The gates have been embroiled in debate since being installed in 2008 and are at the heart of two lawsuits. The move came more than a month after a state appellate court denied the city’s request for rehearing, over a June ruling that said the city must prove it acted in “good faith.” High court review was denied.

Town Center a Go: SCWD crews dug their first hole to replace underground water and sewer utilities along PCH. The presence of heavy machinery and work crews along the roadway marked the second sign of visible change coming to Dana Point’s downtown corridor.

Boarding Barred on Six Streets: Dana Point banned skateboarding down six public streets and sidewalks throughout the Monarch Bay Terrace neighborhood, located at Pacific Coast Highway and Crown Valley Parkway. Municipal code allows the council to designate any public roadway or sidewalk as a no roller-skating, skateboarding or bicycling area.

Trunk of a Show: Dozens of colorful life-sized baby Asian elephant statues called Dana Point’s parks, docks, hotels and library home for 10 weeks this fall, as the Elephant Parade was introduced to America after stops in Singapore, Milan and Amsterdam. The parade is the Asian Elephant Foundation’s marquee fundraising event, bringing awareness and funds to saving the endangered species.

Mary Jane Settlement: The city reached a settlement with Garrison Williams, former owner of a Dana Point medicinal marijuana shop that was closed in 2011. The agreement effectively ended litigation that had been ongoing since 2009, when the city accused pot shops owners of violating municipal zoning codes.

Pushing the Height Limit: Resident concerns about density, traffic, height, deliveries and parking were voiced as the Planning Commission neared a decision on the more than 250-room, two- to five-story hotel proposal for the southwest corner of Pacific Coast Highway and Dana Point Harbor Drive. Commissioners continued a decision on the Doheny Hotel until February 2014.

No Reprieve for Shawkey: The state’s highest court denied review of an appeal by, Gary Shawkey, a Virginia man convicted of luring 71-year-old retired software businessman Robert Vendrick to Dana Point, killing him and disposing of his body at sea for financial gain. Shawkey is serving out his life sentence in San Diego. Vendrick’s body was never recovered.

Harkey v. Wyland: A legal scuffle between two Republican state lawmakers vying for a seat on the Board of Equalization ended, with Assemblywoman Diane Harkey dropping a $10 million defamation lawsuit against Sen. Mark Wyland. The dispute stemmed from comments Wyland made at a Tea Party event in July about a high-profile lawsuit against Harkey’s husband, Dan.

Charitable Park Lands: After pleas and a petition from area residents not to sell an unused parcel of Capistrano Beach land, the City Council unanimously approved a $3.625 million deal with the Charitable Light Foundation for the 3.2 acres, once set aside for park use.

A New Council: A split City Council vote reversed the roles of Steven Weinberg and Lisa Bartlett. Each year, the five-member body rotates its lineup by voting two council members, mayor and mayor pro tem. In a 3-2 vote, with councilmen Carlos Olvera and Bill Brough dissenting, Bartlett took over Weinberg’s role. The pair wound up flip-flopping their council titles, both having served in the positions before.