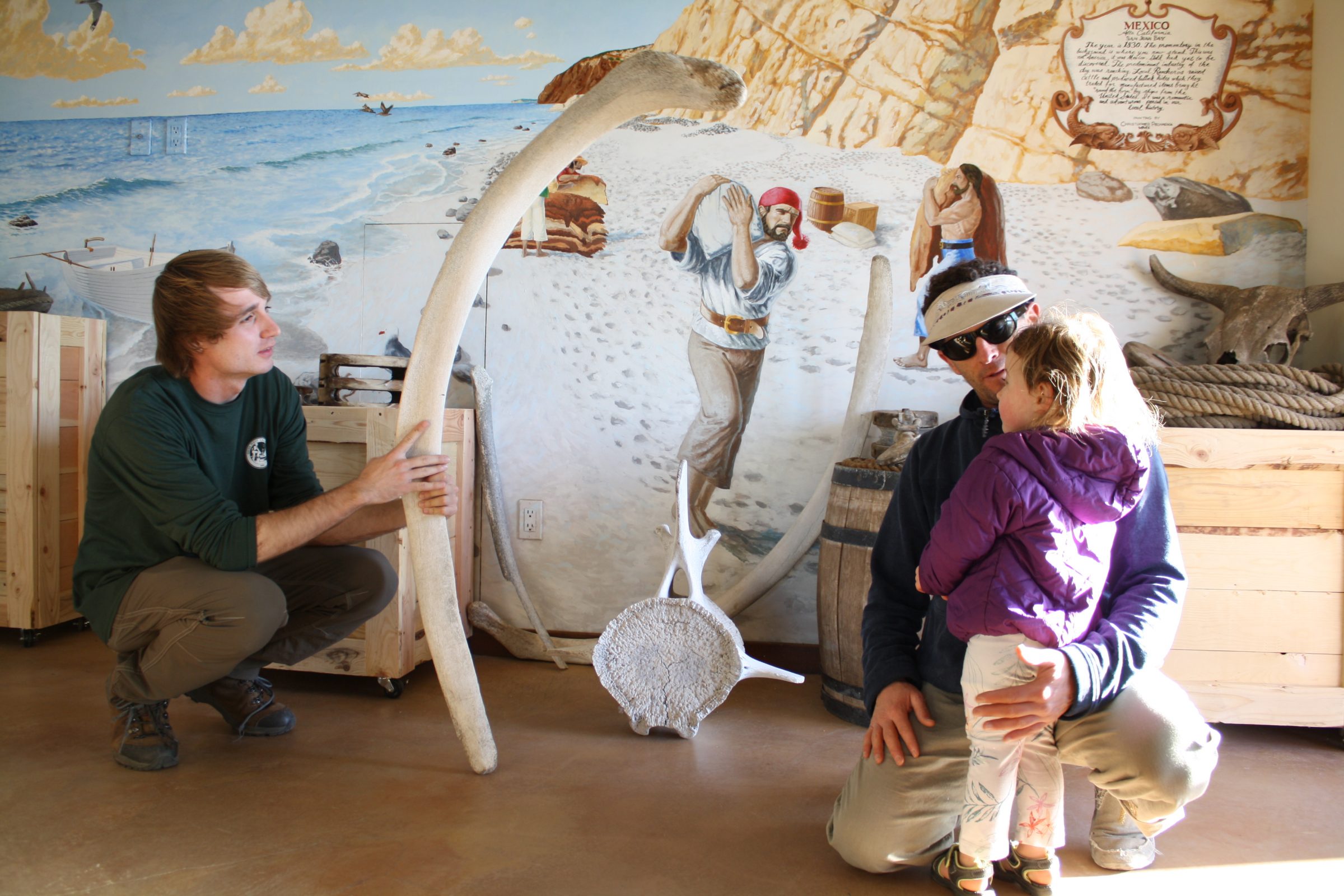 A Look inside the Dana Point Nature Interpretive Center

Willow Wright and Corey Stafford, an intern at the Nature Interpretive Center, color activity pages from the Kids’ Corner at the Center. Photo: Kristina Pritchett

Corey Stafford, an intern at the Nature Interpretive Center, walks through the center. Photo: Kristina Pritchett

Corey Stafford, a Nature Interpretive Center intern, and Sean Vogt, a natural resource protection officer, look through some of the items in the Kids’ Corner at the Center. Photo: Kristina Pritchett

(At left) Corey Stafford, a Nature Interpretive Center intern, holds a bone from a whale to show guests Adam and Willow Wright at the Center. Photo: Kristina Pritchett

Standing in front of a large whale bone, Willow Wright, 3, looked at her dad, Adam. She smiled, a bit shy at first, but then once shown to the kids’ area, she began pointing out different animals.

“That’s a whale,” Willow said pointing at the TV screen.

The Nature Interpretive Center was playing a DVD from Dana Wharf Sportfishing & Whale Watching showcasing different whales that can currently be found in Dana Point.

Along with the monitor, the center has interactive exhibits about the San Juan Creek watershed, animals that can be found in the Headlands, the history of the area and more.

With the beginning of a new year, staff at the center shared with the Dana Point Times how the center began and where they want to see it go in the future.

The Headlands area was established as part of the development plan of the Strand community, after the Chandler family sold the land to Sanford Edward and the Headlands Reserve, LLC.

As part of the permit for redevelopment, surveys had to be completed of wildlife and plants existing in the area, which is when the Pacific Pocket Mouse was discovered. The pocket mouse was put on the Endangered Species List by the U.S. Fish and Wildlife Services in 1994.

The Headlands Development and Conservation Plan set aside 55 acres of Environmentally Sensitive Habitat Area within the 120-acre development site on the Headlands for the mice, the California Gnatcatcher and more than a dozen rare plant species. Much of the other 65 acres was reserved for the development of multi-million dollar homes.

As part of the development, Headlands Reserve had to create the interpretive center, but it was then dedicated to the city. The city officially opened the center in April 2010 with the intent to educate the public with outreach programs as well as interactive educational programs.

Jeff Rosaler, the city’s current parks manager, joined the city in 2009 with the intention to manage the center, and coordinate the activities there and at the preserve and the adjacent Marine Protected Areas. When he arrived, he began working with volunteers and other organizations to fill the center.

“[Jeff] was able to coordinate with different people, Karen Schnell and some organizations, to procure some of the coolest taxidermy,” said Sean Vogt, a natural resource protection officer for the city. “He was able to get some of the best fossils to fill this place up so the public had something to interpret.”

After Rosaler arrived, he began working on procuring a grant to replace some of the “old ways of displacing information,” Vogt said.

“We completed the grant requirements and hope to be done by the spring,” he said.

Not only do they manage the center and the trails, but the position of a natural resource protection officer is responsible for the management of the species.

“Jeff and I have a long history of reaching out and working collaboratively with the federal government and other non-profits, not only regional but local, to not only be as educated to what we’re protecting as possible but to have resources at our disposal,” Vogt said.

One of the things they did recently was work to bring in the local assistance grant to monitor the Pacific Pocket Mouse all year round.

Today, the center has seven exhibits and 12 interactive panels on the trails. Each educates visitors on the geography, history of the land and the natural resources of the area.

“There’s some really cool and unique things that people won’t see anywhere else,” Vogt said about the animals and plants that are found just outside the center’s doors.

Throughout the year, the volunteers of the center have a packed schedule. On three Saturdays every month, volunteers lead visitors through different walks: a Whale Walk and Talk, a history tour and a nature tour. One night a month, the center holds a science night at the community center and they work with the Ocean Institute on their tide pool program.

Rosaler and Vogt say they believe the center is doing well.

“We do our best to stay connected to what’s going on, and then we relay that information to the general public through volunteers and our exhibits,” Vogt said. “It’s very rare for a city to have a biologist but then participate in the science community and really be a part of it. I can’t think of another Orange County city that’s at that level. We’re definitely pushing the boundary there and it’s exciting to see that happen.”

As part of the settlement agreement with the city regarding the Strand development access trails, a scenic overlook project is in the center’s future.

“It’s been one of our capital improvement projects for a number of years,” Vogt said. “It’s a project we wanted to do for the taxpayers, visitors and residents. It’s somewhere for people to go and relax and enjoy one of the best views in the world.”

In order for the project to come to fruition, Rosaler said they will need to submit a coastal development permit. They aren’t sure of a timeline, but say it depends on permitting schedules.

Another thing the two would like to see happen is an expansion of the front porch.

Inside the building, some things may get rearranged and the Kids’ Corner may get more work but Vogt said they’re happy with what they can provide to the public.

“Our educational outreach program has gotten to a place that we’re pretty happy with what we have,” Vogt said. “We’re current, and we think we’re doing as good of a job as we can when it comes to educating the public of what we have here.”