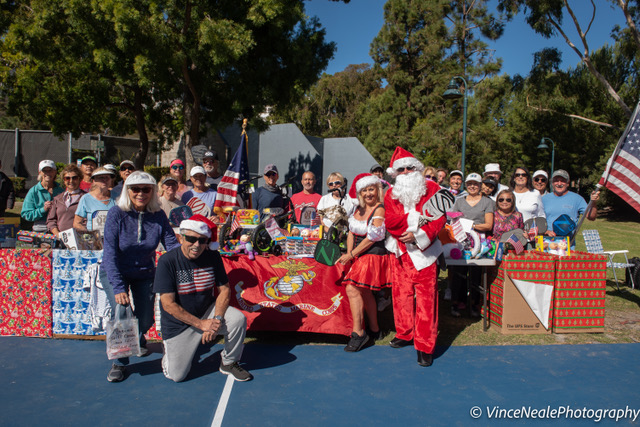 In the spirit of giving thanks, the Dana Point Pickleball Group gathered donations for U.S. Marines stationed at Camp Pendleton and their families on Nov. 14, collecting $1,650 in gift cards, new clothes, toys and bikes.

The Pickleball Group has held a donation event for the Marines for the past three years. Dana Point residents Gary and Trudy Daverso and Joe and Loretta Harris spearheaded the efforts for the pickleball players’ group.

Trudy Daverso’s father, Staff Sgt. Milan Muslin was a Marine who fought in the Pacific, in Bougainville during World War II.

“He always loved being a Marine and we always flew the Marine Flag,” Daverso said in an email.

“I was donating to this Marine Christmas drive for years and three years ago I asked Gary if the Pickleball Group would be interested,” Daverso continued. “Boy, were they! Big time!”

Since then, the Pickleball Group has gathered to host donation drives for the Marines.

“We even had a special drive for the eight Marines killed from Pendleton who were overseeing the evacuation from Afghanistan,” Daverso said.

“I can’t imagine my dad being gone and the little we can do for those kids warms my heart,” Daverso continued. “Anything we can do for them to light up their faces for Christmas!”

“Our Dana Point Pickleball Group very generously jumped at the opportunity to make an impact on our local Marine families,” she continued.

“I’m a Marine Corps Daughter,” Morgan said in an email. “Knowing that I can have a positive effect on the children of local young Marines is very heartwarming to me.”

Joe Harris, Dana Point resident and Pickleball Group member, grew up without his dad, who was killed in action during the Vietnam War. His dad, Marine Corps. Capt. William Thomas Harris, died during a rescue and recovery mission in 1963.

“I help Marines and other soldiers and their families whenever I am given a chance to,” Harris said in an email. “I get very emotional when I speak about my dad’s and other U.S. soldiers’ bravery and courage.”

“I am pleased beyond words to show our support and love for the Marine families in Camp Pendleton,” Harris continued. “Some of the children we support could end up growing up without a soldier parent just like I did.”

Representatives from the Orange County Marine Corps Auxiliary and seven of the Marine’s wives and some of their children met the pickleball players at the courts at Del Obispo Park on Nov. 14 to pick up all the donations.