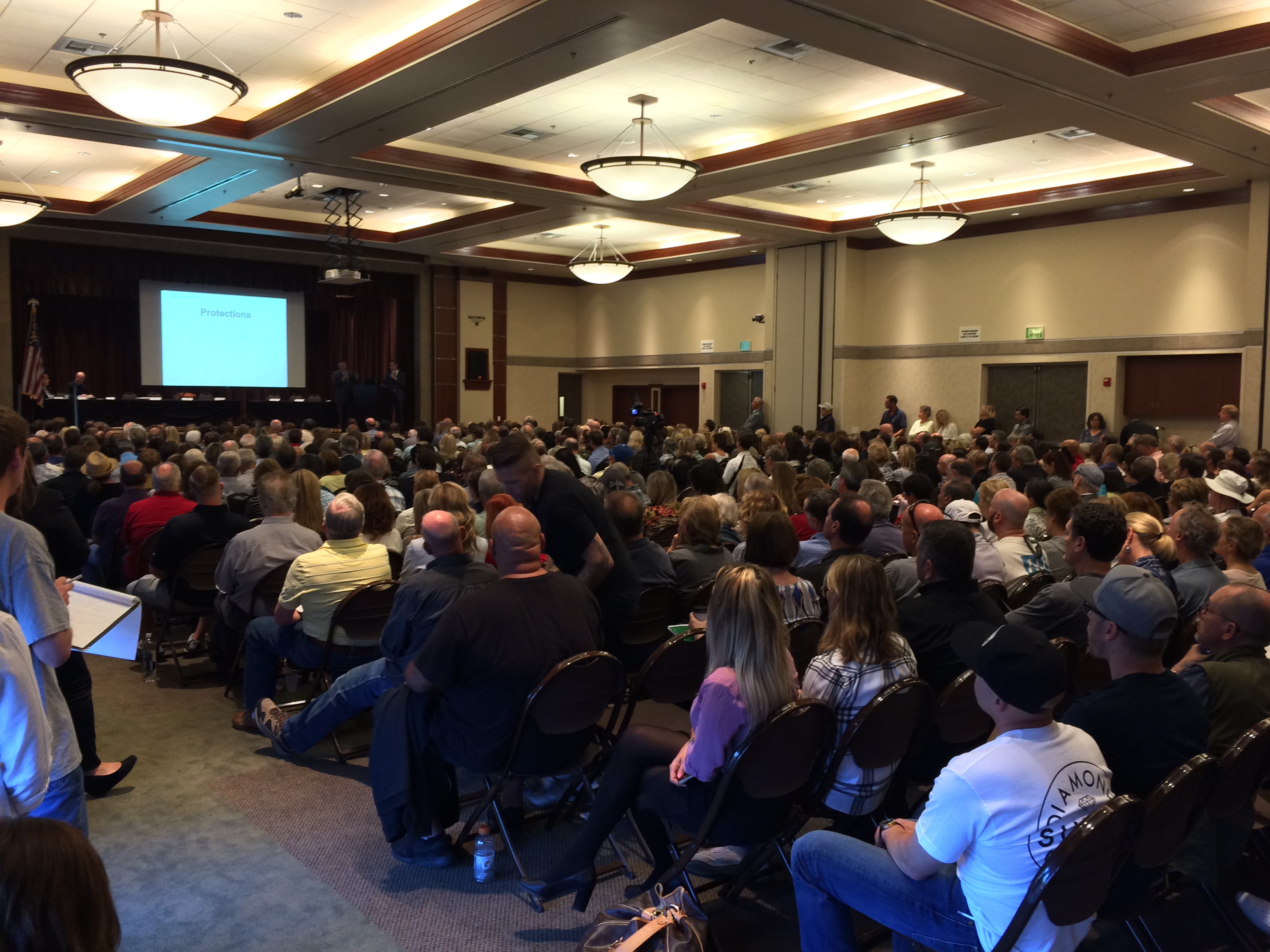 The event underscores the growing discontentment with sober living facilities that many towns and residents in Orange County are beginning to feel. The intent of the meeting was to educate residents on current legislation being considered by the state and discuss why regulating sober living homes is difficult.

It was the fourth town hall sponsored by State Sen. Pat Bates (R-Laguna Niguel) in the last 12 months, and this time she was joined by Assemblyman Bill Brough (R-Dana Point) and Assemblyman Matthew Harper (R-Huntington Beach). The three state legislators opened the evening with a few general remarks about sober living facilities.

“We can’t even get in there to find out if these things are working,” Brough said. “I agree that people need help … but these homes are not the right facilities to go to. I’m not a doctor, but it doesn’t make sense to me to put six addicts in a home and [then] they’re free to do what they want to do at night.”

Harper was one of the few speakers to discuss addressing the underlying problem associated with sober living homes: substance abuse.

“Places that we never would have thought about it, there are young kids who are getting addicted to opioids,” Harper said. “When heroin does hit, it’s significant.”

Bates spoke of three pieces of legislation the group had authored and that failed to gain traction at the statehouse. Those bills include one from 2015, authored by Brough and Harper, which would have required such facilities to receive licenses; it did not receive a hearing. There was another bill this year, authored by Bates and Brough, which would have enforced health and safety standards on sober living facilities. It only received Republican support and was defeated in committee.

Two bills are currently making their way through the legislative process, having passed the Assembly Health Committee, Bates said. One is a bill that is co-authored by Bates, Brough and Harper, and that enforces a certification program on sober living homes and requires contact information for the home operator and at least one tenant. The other bill, co-authored by Bates and Brough, would allow cities to request that the state not allow new treatment facilities to be built within 300 feet of other treatment facilities. Such a law would prevent the over-concentration of sober living homes that many South Orange County communities are reporting.

So many attempts at legislation have been made because regulating sober living facilities is tricky. Dana Point City Attorney Patrick Muñoz gave a presentation on the legal aspects of sober living homes with Todd Leishman, a lawyer at Best Best and Krieger.

By definition, because sober living homes do not provide medical services to their patrons, they do not have to seek licensure from state or local health departments, and thus avoid regulation. And because people “in recovery” are considered disabled by state and federal law, they are protected by the Americans with Disabilities Act, which protects certain groups from housing discrimination, among other things.

“The courts have made it very, very clear that persons who are living in sober living homes … are disabled,” Muñoz said. “If a city adopts a law that is targeted at them, it is discrimination and we cannot do it.

Muñoz added that operators are also required to report if they have seven residents or more, and thus incur regulations, but operators subsequently do not always report accurate figures.

There were two case studies presented at the meeting—one on Costa Mesa and another on San Clemente.

Tarquin Preziosi, the city attorney of Costa Mesa, talked about his city’s successful efforts to enforce regulation on sober living homes—something other municipalities haven’t been able to do yet.

Preziosi outlined how Costa Mesa passed laws that put a 650-foot buffer between sober living homes, banned them from residential areas and required contact information for operators. Solid Landings Behavioral Health, which owned 33 homes in Costa Mesa, sued the city. A district court ruled in favor of the city before a U.S. appellate court granted an injunction upon appeal, meaning that the city would not be able to enforce its law.

However, the city and the sober living home operator reached a settlement, and over time, 15 homes were closed, with the other 18 scheduled to shut down over the course of two years. Solid Landings will still be allowed to operate two community centers.

It’s also important to note that such a strategy incurs many costs—Newport Beach was forced to pay more than $5 million in settlement money alone when sober living home operators sued legislation they had enacted that was similar to Costa Mesa’s.

In another case study, David Hurwitz, a San Clemente resident, recounted his ongoing legal battle with a sober living facility that moved next door to his home in Talega 18 months ago. Hurwitz said “the entry of the facility has changed the character of our neighborhood,” claiming that up to 14 people are living in the four-bedroom house, and that he wouldn’t wish the situation on his worst enemy. Hurwitz said he used his golf range finder to determine the sober living home’s smoking area was only 12 yards from his house.

“We went as far as to bring in a CSI-type investigation company that did chemical testing on our windows that shows nicotine stuck on our glass,” Hurwitz said. “We are constantly having interruptions in the middle of the night … lots of people drinking Red Bulls, staying up late. It became unlivable next door [to the facility].”

So Hurwitz sued, claiming that the facility is running a commercial operation in a residential area, and the Orange County Superior Court will make a ruling on their case on June 6. As many sober living home opponents claim that the facilities should be outlawed because they are commercial operations in residential areas, the ruling could set a major legal precedent.

However, Sober Network Properties, which owns the home (and many others in Orange County), is counter-suing Hurwitz for their right to operate. The company says they were issued a cease and desist letter by the city, violating two anti-discriminatory laws prescribed by the Americans with Disabilities Act and the Fair Housing Act.

Following the case studies, a panel of all the participants took pre-screened questions from the audience. Absent from the event was an opportunity for sober living home residents and operators to speak, though a show of hands revealed about four dozen of such people in attendance.