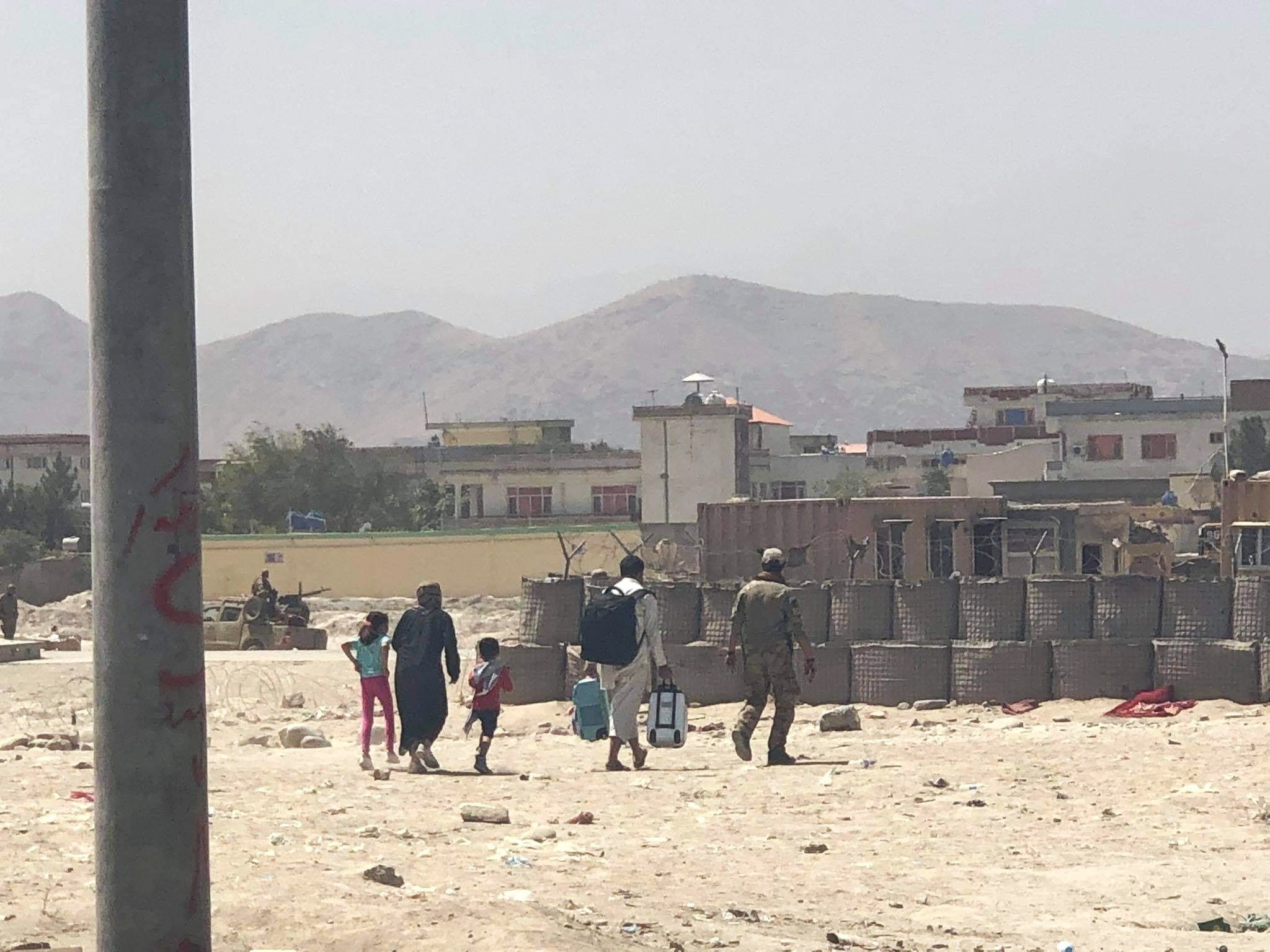 For several days, Mohammad Sadat couldn’t get much sleep.

As he watched his birth country fall to the Taliban, he’d stayed glued to his phone, anxiously waiting day and night for any embassy or organization in Afghanistan to call him with an evacuation plan so he, his wife and their two young children could return to the U.S.

“I was waiting for their call, being hopeful,” said Sadat.

It was around 2 a.m. last Friday morning in Kabul when he received a WhatsApp text from a member of the Denver-based group “Team America”—a grassroots effort, being referred to as a “Digital Dunkirk,” to help with the evacuations in Afghanistan.

“They asked me to be at one of the gates of the airport,” Sadat said. “They asked if I can get there in 90 minutes.”

Sadat woke up his wife and kids, along with his brother, who would need to drive them to the Qasaba gate of the Hamid Karzai International Airport (HKIA). The family would have to move fast, but there was another issue: Taliban checkpoints.

“At that time in the morning, it’s not safe to go to the airport,” said Sadat, who had spent the past couple of weeks actively avoiding Taliban militants who were searching for those they believe to be traitors.

As permanent residents of the U.S. with American passports, Sadat and his entire family, including his parents and siblings who still reside in Afghanistan, would certainly have targets on their backs.

For five years, Sadat worked as a legal advisor with U.S. AID contractors for the Rule of Law Stabilization Program before emigrating to San Clemente in 2016. He was fearful that his parents’ neighbors might reveal that information to the Taliban.

“We have been living in the same house for 30 to 32 years … everyone knows I used to work for the U.S. government for five years,” Sadat said, adding: “They might remember; they knew I returned from the U.S. I was scared . . . what if someone finds out?”

Sadat and the family braved the early morning drive to HKIA. As expected, they encountered a checkpoint and were asked to stop. To stay above suspicion, though, Sadat said, he had to dress in old, dirty clothes. According to Sadat, if you looked clean, you were likely to face a tougher line of questioning.

The family was able to get past the checkpoint and reach Qasaba. However, there were complications, as the buses that would take them to HKIA had filled up, he said, with non-U.S. citizens and residents.

They were able to get to the gate by 3 a.m. and were forced to stay there, waiting until about noon. By then, though, Sadat said, the crowd had grown, making him feel as uneasy as the day before suicide bombers had attacked the airport.

“I was concerned for my life and especially wife and my kids’ lives,” he said, adding: “I was in contact with the evacuation team; I told them, ‘I have to go home, because I’m concerned about my kids’ safety.’ They were trying hard, but I was like, there’s no way we can get on these buses.”

After returning to his brother’s home, Sadat received another text message from Team America, asking if he can be back at HKIA within the hour. For a moment, he recalled, he questioned whether it was worth trying again. But because it was now the afternoon, making it less likely to be subjected to checkpoints, they made their way back.

Upon arrival at the airport, Sadat and the family were able to meet with the evacuation team. For about five hours, the family—along with about 200 others, Sadat estimates—waited to board a U.S. military plane.

After weeks of uncertainty, the family was finally airborne and bound for the United States. To get back, they would have to spend this past weekend traveling first to Kuwait, then Qatar. From there, they were able to catch a commercial flight to Bulgaria, and then to Ireland.

On Sunday afternoon, Aug. 29, the family landed at Philadelphia International Airport. After their arrival, Sadat’s wife turned to him and said, “We made it back home.” Though they were back on American soil, the family was still a coast away from their San Clemente home.

Sadat, who works in customer service for a company that makes kitchen cabinets, searched for flights to California, but none were available until the next night.

From the airport in Philadelphia on Monday afternoon, Aug. 30, Sadat told San Clemente Times that while he’s relieved to have returned to the U.S., having to leave his parents and siblings in Kabul has given him mixed feelings.

“I am so very worried about my family members,” he said.

Sadat’s parents and brothers are what brought he and his family back to Afghanistan in mid-July, in the first place. The family traveled to Kabul largely to visit Sadat’s mother, who had been recovering from complications with her eyesight and was on the verge of becoming blind.

“I thought, what if I go next year and, God forbid, my mom can’t see me? … I have to go and see my mom while she can see me,” he said. “I went because I was scared my mom was going to lose her eyesight.”

The family had planned to stay in Kabul only until Aug. 23. But by then, the situation had dramatically changed, as they and thousands of others were stuck hoping to eventually be evacuated before U.S. troops officially withdrew from the country this week.

In February 2020, the U.S. and Taliban signed an agreement that set the terms for a U.S. withdrawal from Afghanistan by May 1, 2021. At the time of the agreement, the U.S. had about 13,000 troops in Afghanistan, according to a Department of Defense Inspector General report.

The withdrawal of U.S. troops is contingent on the “Taliban’s action against al-Qaida and other terrorists who could threaten us,” then-President Donald Trump said in a speech at the Conservative Political Action Conference. The pact included the release of 5,000 Taliban fighters who had been held prisoners by the Afghanistan government, which was not a party to the agreement.

When President Joe Biden took office, he initially pushed the May deadline to Sept. 11. Ultimately, his administration pushed ahead with a plan to withdraw by Aug. 31, despite signs that the Taliban wasn’t complying with the agreement.

On Aug. 15, Taliban fighters entered the Afghanistan capital of Kabul. The Afghan president fled the country and U.S. diplomats were evacuated from the embassy by helicopter. Thousands of interpreters, and others who worked with the U.S., as well their relatives, were left behind.

“The truth is: This did unfold more quickly than we had anticipated,” Biden said in an Aug. 16 speech. “So, what’s happened? Afghanistan political leaders gave up and fled the country. The Afghan military collapsed, sometimes without trying to fight. If anything, the developments of the past week reinforced that ending U.S. military involvement in Afghanistan now was the right decision.”

Several days before the city fell to the Taliban, Sadat said, he contacted airline officials, asking to move up the family’s return flight home. The earliest, they told him, was Aug. 18. Being that it was only a five-day difference, Sadat didn’t change the flight.

“It was only a five-day difference; no one would think the Taliban could (take over that quickly),” Sadat said, noting that even if he had changed the departure date, many flights had been canceled after Taliban forces took over the city.

In the days that followed, thousands of people flooded the airport in Kabul, desperate to board flights out of the country and flee Taliban rule.

Last Thursday morning, Aug. 26, a deadly attack on the airport led by the Islamic State killed 13 U.S. troops and left 18 others wounded. At least 160 Afghan civilians were reported dead, according to news outlets.

That same morning, Sadat and his brother had been in the vicinity of HKIA’s Abbey Gate, where the suicide bomber later detonated an explosive vest. The two went to the airport to talk with U.S. military officials about evacuating.

“We decided to go back home … but by the time we got home … I heard the explosion happened,” Sadat recalled, adding: “We were fortunately able to survive and leave the area moments before.”

Sadat and the family were expected to arrive at Ontario International Airport in San Bernardino County on Tuesday morning. He praised the work of Team America, U.S. military forces and other advocates who have been working to evacuate his family and the many others.

“I’m thankful for everyone—friends and families, my kid’s school, that my cousin said has been calling every day to check on my family.”

Here in Southern California, Sadat’s cousin in Mission Viejo, Nadia Kambiz, also tried to connect with anyone or any group who can secure emergency visas for the family. Kambiz had also been in regular contact with Marblehead Elementary, where Sadat’s two children are enrolled.

Sadat said he appreciated the hard work of the U.S. Armed Forces, and he was thankful to everyone who helped get his family home, including friends, family and Marblehead Elementary.

One person in particular Sadat wanted to thank is a man named Alex Flores. Though never meeting Flores, Sadat said he was instrumental in connecting the family with Team America.

“I never met Alex Flores; he helped me out a lot, one of the biggest reasons I’m back home,” Sadat said, “And the other is another member of the evacuation team, John,” whose last name Sadat couldn’t remember.

Flores, a veteran in the Marine Corps and reservist who’s currently a federal prosecutor in Albuquerque, New Mexico, has been volunteering with another Digital Dunkirk group called Afghanistan Expatriation.

He explained that a friend of Sadat’s, who was being evacuated earlier last week with the help of Flores, asked for help in getting out Sadat’s family. For days, Flores had stayed in contact with Sadat, offering comfort and reassurance through the tumultuous time.

“The last week,” Flores said, “was the hardest week of my life. It was the most fulfilling, and the most heartbreaking.”

Eventually, through an interconnected web of fellow Digital Dunkirks, Flores was able to get Team America to assist Sadat on the ground.

The groups, he describes, are really “a bunch of veterans, governmental folks, humanitarians who connect with their own little connections and all end up at the finishing line … from my time in the Marine Corps, it was a bunch of different groups, but at the end of the day, it was one team, one fight.”

Though the U.S. has officially withdrawn from Afghanistan, Flores said that there are still some Americans on the ground working in an unofficial capacity to assist evacuees.

“Between unofficial work by Americans and the Afghan resistance, there are still avenues being developed for overland evacuation,” he said. “And we’re executing those operations right now.”