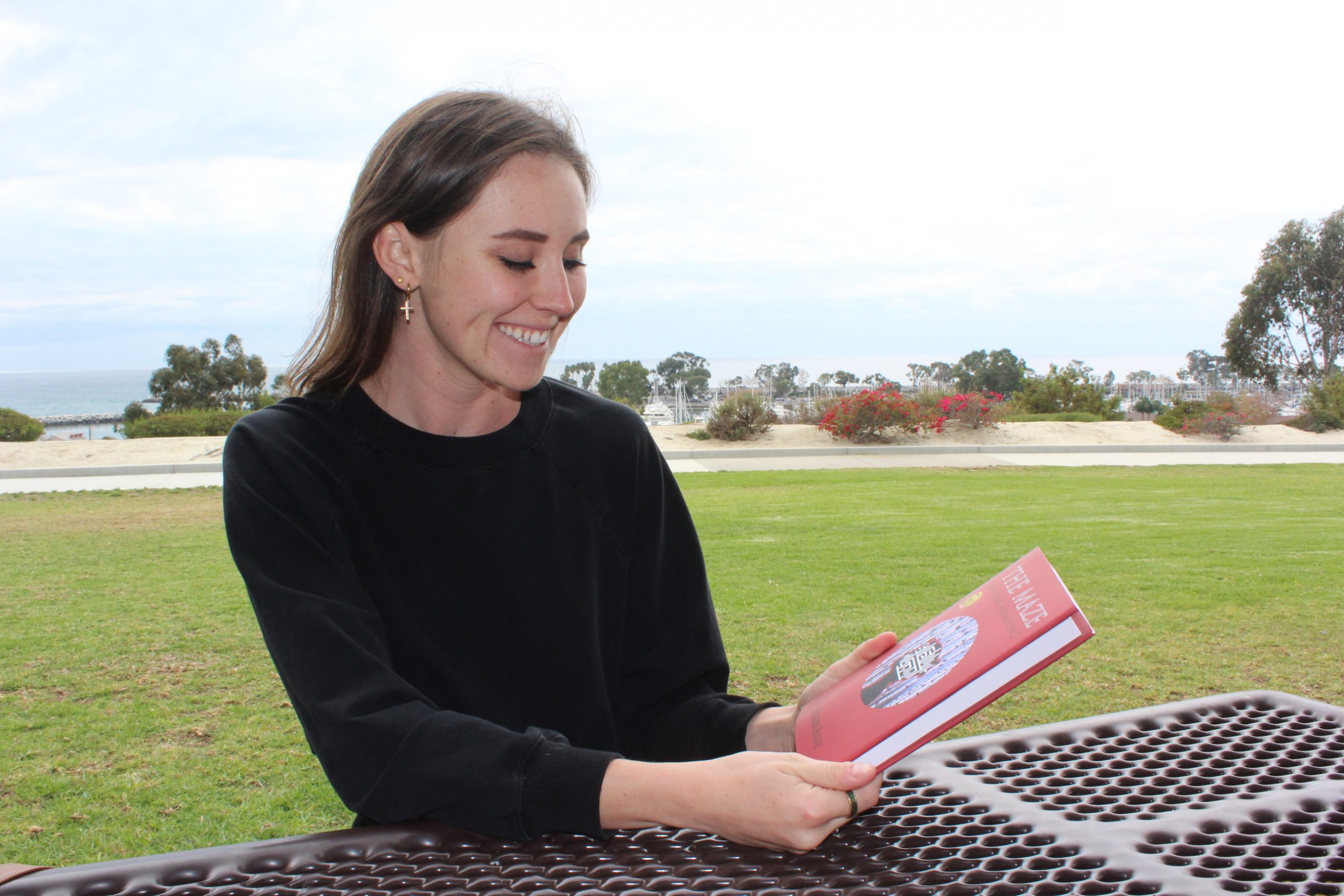 Featured Image: Alexandra Russell on Monday, Dec. 13, shows off her first book, The Maze: Her Rude Awakening, a psychological thriller/self-help novel, that, she says, is a unique approach to addressing mental health. Photo: Breeana Greenberg

Twenty-four-year-old author Alexandra Russell feels that she is trailblazing a new genre, combining a psychological thriller with self-help to create a unique approach to mental health.

Russell, a Dana Point resident, published her first book, The Maze: Her Rude Awakening, earlier this year. The psychological thriller/self-help novel follows a young girl, abducted by a hypnotherapist and put into a labyrinth within her own mind through which she must navigate.

“The maze is a symbolic place within her own mind that represents what it physically feels like to go through depression, to have those really dark thoughts,” Russell said. “So, the point of the book is for her to navigate her way through the maze, find her way out of the maze alive, ultimately finding her truth within herself, peeling back her layers and feeling the depths of her ego, per se.”

The Maze serves as a self-help book as well. As the protagonist moves through the maze, she comes across different doors that represent characteristics, emotions, or limiting beliefs regarding depression, which she must come to terms with and reframe before she can continue on her journey.

“I do think The Maze has a really impactful story that it can leave on readers, not only a thrilling, exciting, scary story, but also something that they can take with them, lessons throughout the book that they can integrate into their own life because it is a self-help novel as well,” Russell said.

Russell found that the psychological thriller genre worked well to represent the darkness that dealing with depression and working on one’s mental health can often feel like. She feels that she is carving out her own niche through the combination of the two, very different genres.

“I’m trying to really stick to these genres and kind of create something new, and hopefully that makes me stand out as an author,” Russell said. “And all my future books, I’m going to keep focusing on these genres.”

Russell graduated from Dana Hills High School in 2015, and received her Associates Degree in Business and Entrepreneurship at Saddleback College.

The book was inspired by a nightmare Russell had as a freshman in high school.

“I woke up in the middle of the night screaming, but I was excited at the same time, because I love scary movies,” Russell said. “So, I was like, ‘Oh, my God, that is going to be a movie one day, that’s going to be a book one day. I’m going to make it happen.’ ”

But it wasn’t until her father passed away unexpectedly in 2018 that Russell finally put pen to paper.

The Maze: Her Rude Awakening was published in June 2021.

“It actually hit the bestseller list on Amazon when it first released, which was super exciting as a new author,” Russell said.

Russell has begun to work on her next psychological thriller/self-help novel, Grief House. She is also in the process of publishing the second edition of her book. Russell wanted to update The Maze after looking back with the clarity that she’s gained from therapy since writing the book.

“This really just showed me where my mental capacity was at that time and how much I’ve grown since then, and how much I want to implement all my new knowledge into the second edition,” Russell said.

Russell uses her website, pearlizedspirit.com, as a platform for discussions on mental health and The Maze. She hopes that her book can help build a community for her readers.

“We’re all on our own journey, but it is definitely easier said than done,” Russell said. “Mental health, inner work, inner healing is a lot of hard work. It is one of the hardest things, I think, to ever do is to really come face to face with yourself. … I’m not expecting anyone to read this and be like, ‘You’re healed.’ No, but if it can help them along their journey, beautiful.”

As an offer for Dana Point locals, Russell will sign copies of the book for those who order through her website.