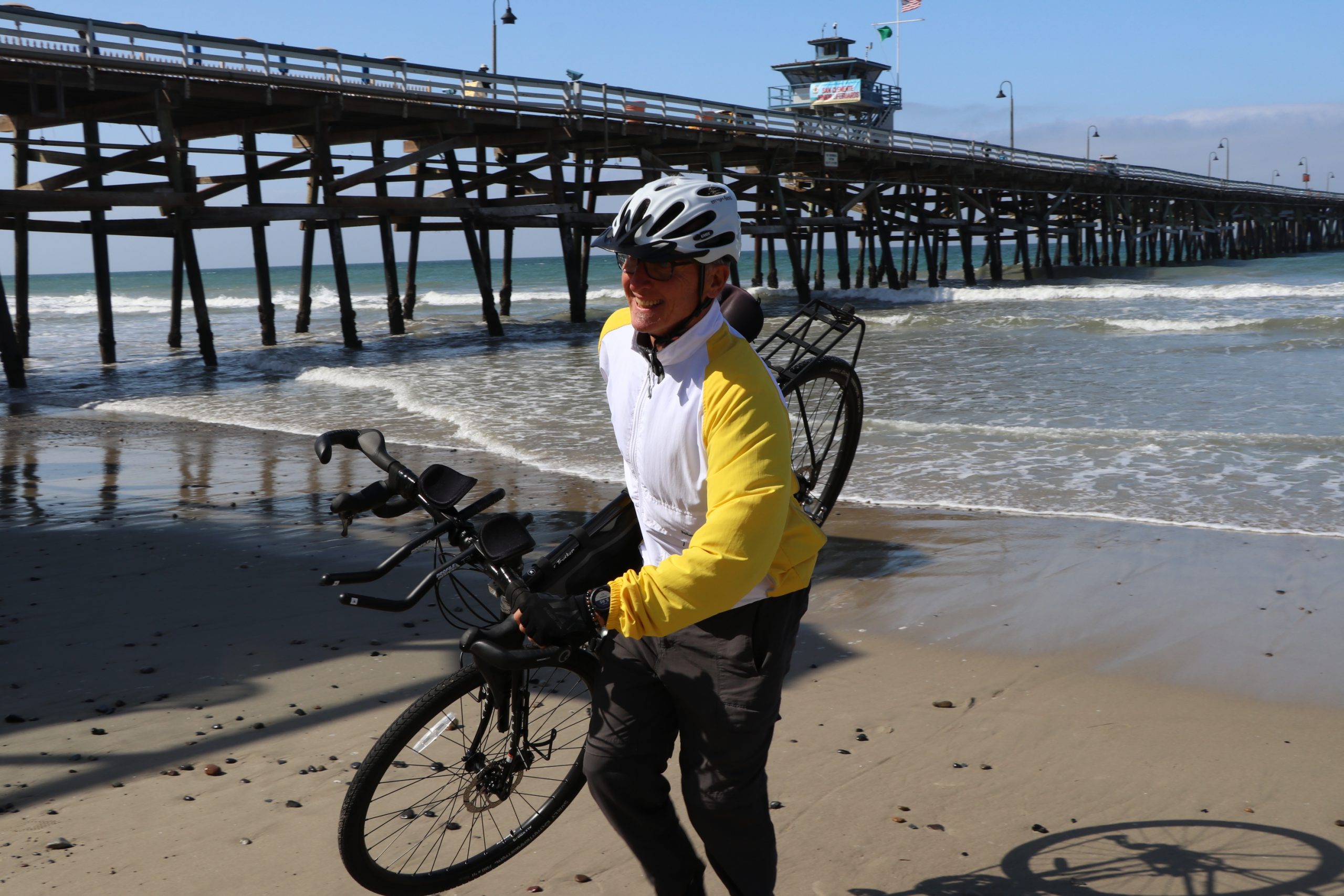 When Paul Webb got the invitation to attend his 50-year high school reunion in Neptune, New Jersey at the end of the summer, he didn’t think about impressing his former classmates by pulling up to the milestone event in some luxury automobile wearing a three-piece suit.

Instead, the 67-year-old Talega resident pictured himself bicycling across the country just to get there. But more than that, he wanted to use the opportunity of traveling 2,899 miles by bike to raise money for a worthy cause.

A sales trainer and author of a book entitled The Number One Best Selling Book, Webb departed for his 3½-month journey on Tuesday, April 20, starting from the beach at San Clemente Pier, where he dipped the back tire of his bike in the water. He intends to dip the front tire in the Atlantic Ocean when he arrives in Neptune on Aug. 6.

As a former lifeguard and professional athlete with experience in downhill ski racing and long-distance swimming, Webb wants to see all the money he raises—from both book sales and the bike ride—go toward the Challenged Athletes Foundation, a nonprofit that supports individuals with limitations who are pursuing athletic activities.

“The Challenged Athletes Foundation has been saving people’s lives, and I want to be associated with that,” Webb said. “I thought I’d tie my bicycle ride across the country, 2,899 miles, and use them as my charity for donations, a penny a mile.”

With a 2,899-mile trip ahead of him, Webb will need to average roughly 27 miles a day in order to reach the East Coast in about 100 days from now. However, Webb said, he’ll likely travel about 40 miles per day, matching what he sometimes rides just for sport.

“For the past two years, I have been riding from Talega to Dana Point and back, and that’s 20 miles. Sometimes, I’ll do it twice a day; I’ll just do that as my workout,” Webb said.

The challenge in bicycling across the U.S. won’t necessarily be physical, he said. Rather, he’ll need to overcome mental roadblocks. For Webb, those mental challenges are something CAF’s athletes face, which is why organizations such a CAF are critical.

“That’s what I really admire in the Challenged Athletes Foundation, is they help with the mental and the physical,” he said. “My whole life has been centered around athletes; I’ve always competed … I know that people who are challenged athletes would love to compete, and that’s what this ride is for.”

Derek Herrera, a captain in the U.S. Marines, sustained a spinal cord injury in 2012 while serving in Afghanistan. He became involved with CAF shortly thereafter as part of his recovery and has since used his time to volunteer as a representative for the organization.

“When I came back, I was adapting to the way that the injury that I sustained had left me, so I had different limitations and new things that I had to learn to adapt to,” said Herrera, who joined Webb for the first few miles of the trip on Tuesday.

“After being athletic in my previous line of work, playing sports and everything growing up, I had to learn new ways of doing that, and it wasn’t necessarily easy or straightforward,” he continued. “And psychologically and emotionally, it wasn’t something that I was excited about pursuing.”

Over time, Herrera added, other volunteers and members of CAF helped him find new opportunities to stay athletic, including participating in various marathons with the use of a handcycle.

To help him on his trip, Webb said, he’s received support from dozens of sponsors that have contributed equipment and other supplies, including his Surly Bike that’s designed for distance, as well as his small trailer and saddlebags that’ll allow him to carry about 120 pounds of gear.

Additionally, Ocean Honda of San Juan Capistrano donated a Honda Odyssey to the cause, so a group of Webb’s friends, as a support team, can travel across the country as well, restocking his supplies or changing out tires every few days.

As for resting, Webb said he’ll be camping out on the side of the road every night, as he follows the Race Across America Route—a path for “ultracyclists” crossing a dozen states that starts in Oceanside and ends in Annapolis, Maryland.

While out on the road, Webb will post to his social media accounts periodically, as well as update the “Where’s Webb?” portion of the website for the book, allowing supporters to keep track of his journey.

Over the summer, there will be three ways to support Webb and the Challenged Athletes Foundation—by donating money for CAF; contributing funds to pay for his support crew’s gas and food; or by sending messages of moral and emotional support to Webb.

Links to donate to the cause and CAF can be found at thenumberonebestsellingbook.com. Additionally, all proceeds from the book’s sales, according to Webb, will go toward the foundation