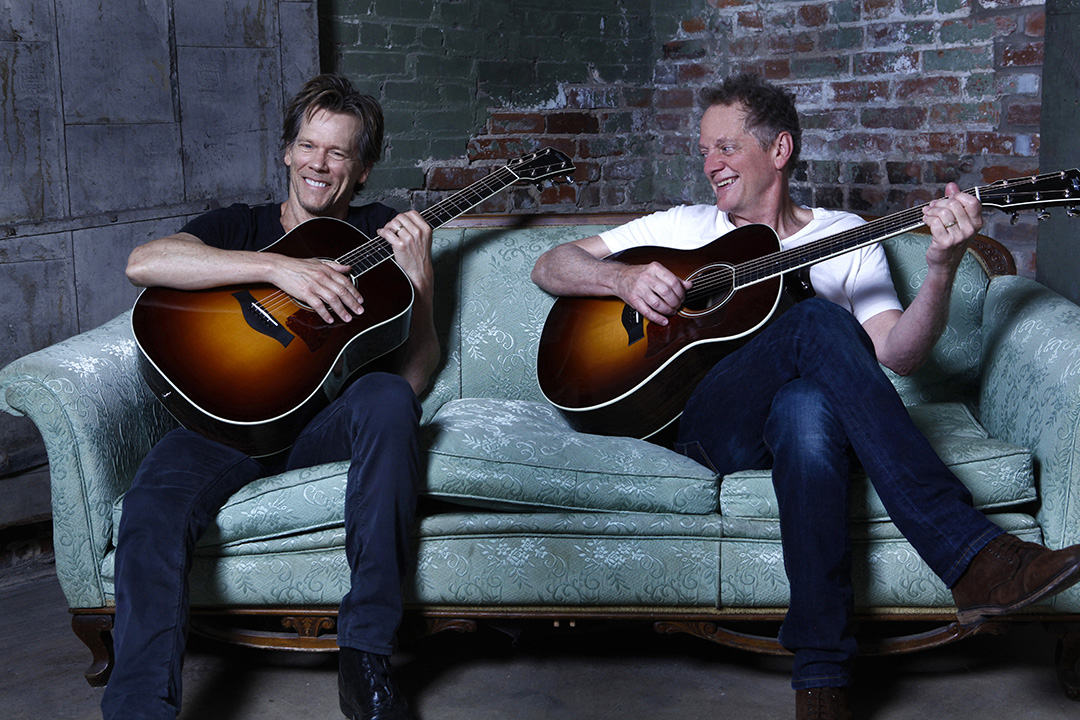 Live at the Coach House: The Bacon Brothers

Siblings fight. They bicker. And they certainly get on each other’s nerves.

That’s just the way most families are.

When siblings are in a band together, there can be a bit of friction. And sometimes that friction is just too much for any one of them to handle—case in point: Oasis.

However, when it comes to The Bacon Brothers, a rock group led by Michael and Kevin Bacon, they’ve proven that blood is thicker than water.

“Well, I think that with the exception of when we get on each other’s nerves, which is rare, but it happens . . . it’s more canceled out by the fact this is a business, and when you’re in a business with your brother, there’s an inherent level of trust that goes into it,” said Michael, who sings and plays the guitar and cello for the band.

While Kevin is the most recognizable of the duo, as an accomplished actor in several hit movies such as Apollo 13 and A Few Good Men, Michael has earned the respect of Hollywood in his own right. Michael, the elder of the two, is an Emmy-winning composer who has scored several documentaries and audiobooks.

Together, Michael and Kevin have put out eight albums, the latest of which, The Bacon Brothers, was released last year. The band is rounded out by Paul Guzzle on the bass and back-up vocals, Joe Mennonna on keyboards and the accordion, Tim Quick on lead guitar, the mandolin and backing vocals, and Frank Vilardi on drums.

The band has been together since 1997, when they debuted their first album, Forosoco. However, the musical journey of Michael and Kevin actually started when they were just boys growing up in Philadelphia, Kevin explains.

“Well, Michael was a born musician; he started playing when he was a little boy, started playing the cello and the oboe . . . that’s what he did from the time he was a little boy,” said Kevin, who also sings and plays the guitar and percussion. “My thing was listening to my older brother . . . seeing him, listening to him and looking at that and saying, ‘That sounds like fun.’ ”

“So I started to have these melodies and these words in my head. I would sing them to Michael, and he would turn them into songs, and that sort of led to ‘Well, let’s do that again,’ ” Kevin said.

The Bacon Brothers are currently spending their summer traveling the U.S. for their Shaky Ground Tour, which is named after a line from one of their songs, “A Road We Know Too Well.”

“I think we always like to have the tour be a little ironic, that there’s aspects to it that are not like ‘this is just all fun’ and ‘this is all easy,’ ” Michael said. “And I think that all the tours sort of reflect that sort of thing. It’s not like a black-and-white kind of thing, but something more of a gray area, which I think ‘shaky ground’ describes.”

While out on the road, Kevin said fans can expect the band to play a lot of material from their most recent album, in addition to performing and experimenting with new songs.

Last month, The Bacon Brothers released a new single entitled “Play,” but the brothers couldn’t state for sure whether they’re ready to release a full-length LP just yet.

“Were getting close enough to have stuff for another album. I guess the question is whether or not we do it as one album or we continue to put out some singles,” Kevin said. “We have to dig more, think a little bit more about that. We could probably put out 10 songs and then after the 10th one is out, put out another album, so we’ll see.”

Tickets to see The Bacon Brothers at The Coach House on Wednesday, Aug. 7, are $55. Doors open at 6 p.m., with the show scheduled to start at 8 p.m.