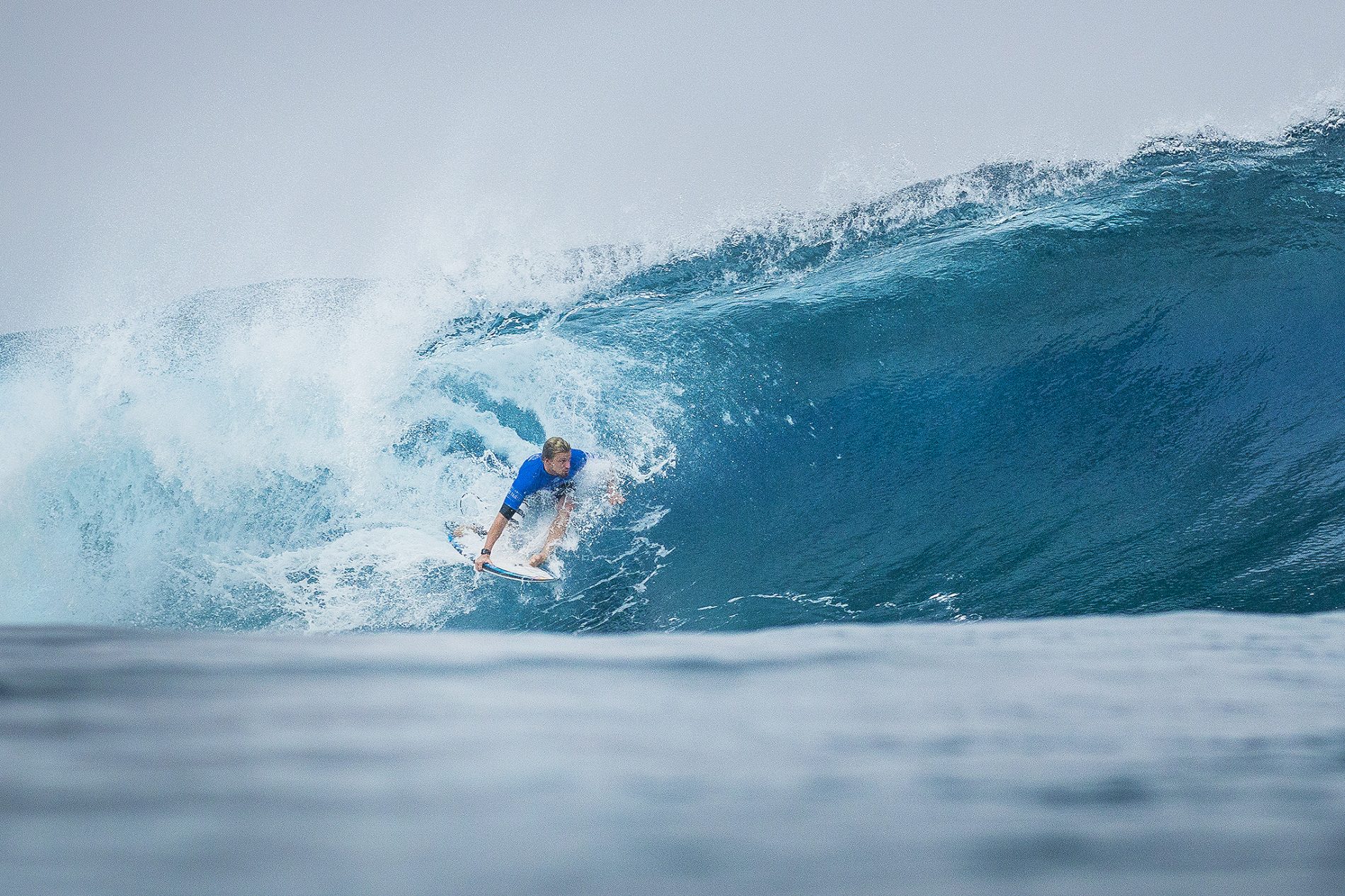 Dino Andino’s exuberance in watching his son, Kolohe, pull off a last-second heat win at the Billabong Pro Tahiti reverberated around the crowded Teahupoo channel. Fists raised to the blue South Pacific sky, he’d just watched his son graduate from benign T Street to contending at one of the world’s premier reef breaks.

Last Friday, Aug. 11, the 14-day waiting period for the Billabong Pro Tahiti, a WSL Championship Tour contest, kicked off. Rather than traveling with an entourage of coaches, trainers and board caddies, Kolohe (whose name translates to “Little Rascal”) kept it simple. It was just him and his old man.

Facing an adverse surf outlook filled with lots of wind and rain, contest organizers made the decision to run on the first day of the waiting period and jam through the entire contest in three days. In the history of the world tour, that’s never been done, and for those competing in the iconic contest, it required an extra dose of focus. Luckily, as he’s aged, matured and his goatee has grown longer, Kolohe seems to have focus in abundance.

After putting his head down and battling through the first two days of the contest, the proverbial “morning of the final” broke under a nasty, gray sky.

“It’s pretty ugly out there,” remarked WSL Commissioner Kieren Perrow after his dawn patrol surf session on the shallow reef. “But we’re expecting things to clear up and for a new swell to start to pulse in.”

Undaunted by the weather, Kolohe battled forward. In the quarterfinals, he stayed busy against hard-charging Brazilian Wiggolly Dantes. While Kolohe hunted down smaller, inside waves and slowly built on his score line, Dantes held on to priority for most of the heat (meaning that he had the pick of any wave he wanted when it hit the lineup). With three minutes left on the clock, Wiggolly made a critical mistake. Taking off on a sub-par wave, he handed priority over to Kolohe, who spent the rest of the heat playing defense and keeping his rival off any potentially high-scoring rides.

“That was a hard heat. Luckily, Wiggolly made that mistake at the end and I got an 8…I’ve still got more to give,” added Kolohe.

This is where the whole “like father, like son” cliché comes into play. In his heyday, Dino was one of the fiercest competitors on the burgeoning pro scene and a former national champion. As they say, the apple doesn’t fall far from the tree. In the semifinals, Kolohe was matched up against Brazilian world champion Gabriel Medina. Kolohe is way too professional to say so, but they don’t really enjoy each other’s company.

“I’m sneaky confident,” he joked afterward. “I’ve done well in all the conditions, both when it’s small and when it’s big.”

The first 10 minutes of their semifinal heat was spent banging rails, jockeying for position, trying to out-paddle each other—neither was going to give an inch to the other. Medina ended up getting the better of Kolohe, who finished the contest with a very respectable third place.

“Obviously, I would have liked to have gone a little further, but I’m happy with my result,” said Kolohe afterward. “This is my best result here at Teahupoo, so I’m stoked and I can hopefully carry some momentum back home with me.”

For the effort Kolohe now sits just outside the WSL’s Top 10. Ranked 11th in the world after the Billabong Pro Tahiti, the next contest on the schedule is the Hurley Pro at Lower Trestles. With a head full of confidence, a heart full of drive and the comfort of surf in front of a hometown crowd, Kolohe could get on a roll at Lowers. He’s long overdue to win the contest. We’ll see what happens in a couple more weeks.