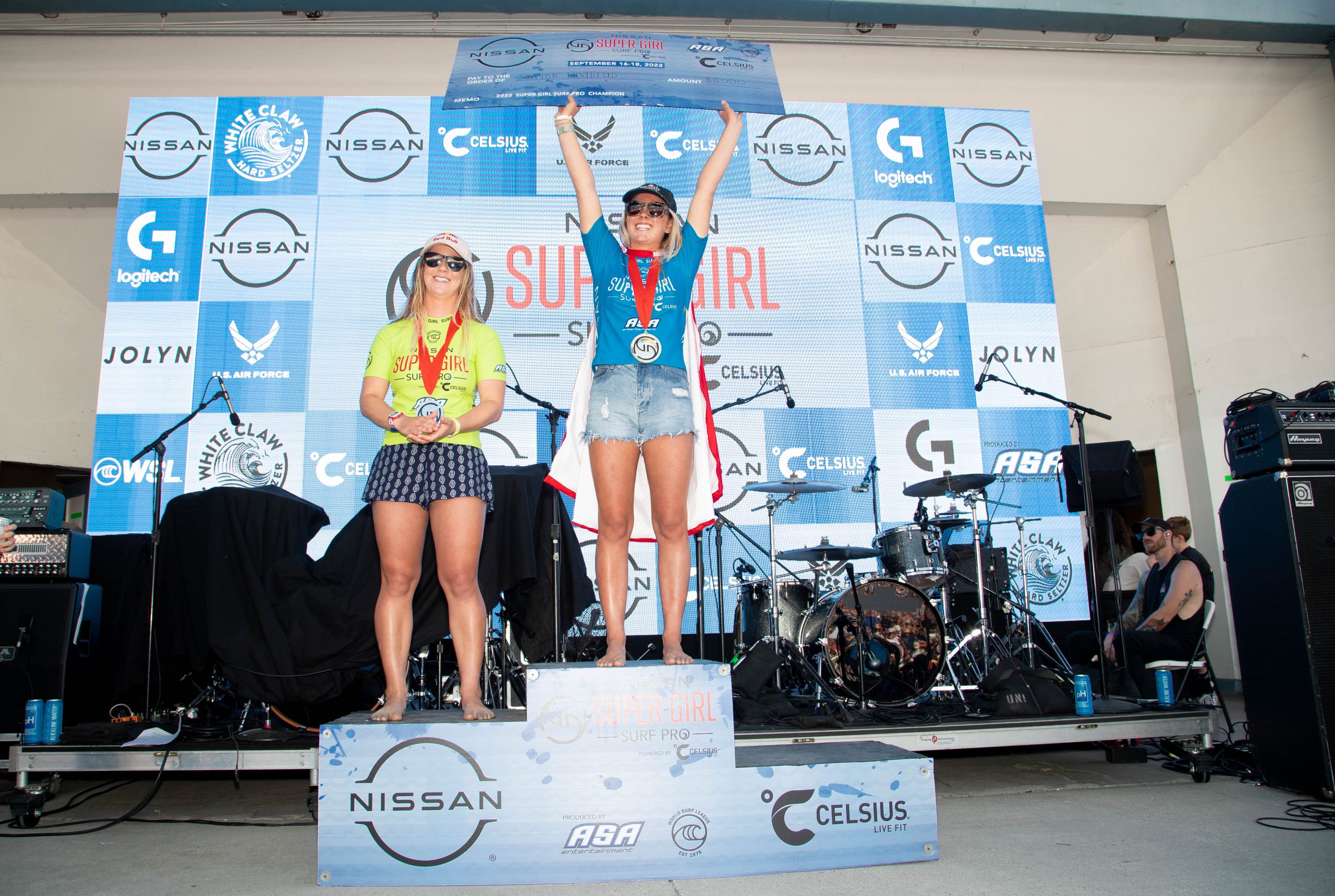 As the youngest surfer to ever win the esteemed, women’s-only event, the San Clemente star looks to finish 2022 with a flourish

After Stephanie Gilmore styled her way to a record-setting eighth world title just a couple weeks ago at the Rip Curl WSL Finals at Lower Trestles, history continued to be made in the water last week, as San Clemente’s Sawyer Lindblad turned in a tour de force at the Super Girl Pro in Oceanside, becoming the youngest competitor to win the event.

Making her fourth straight appearance in a WSL Qualifying Series (QS) final, Lindblad faced last year’s winner and Championship Tour powerhouse Caroline Marks in a hard-fought battle for the top of the podium.

“It feels so good to finally win again,” Lindblad said after the awards ceremony. “I’ve gotten so many second-place finishes recently, and I felt like I knew in that final that it was just my time. That was the time I was going to win, and I’m so grateful for those waves coming in.”

To make it to the final of the Super Girl Pro, Lindblad had to surf through Santa Cruz’s Autumn Hays, 2022 CT rookie Luana Silva, and a very in-form Bella Kenworthy, who also hails from San Clemente.

In the final, Lindblad jumped out to an early lead and managed to fend off a last-ditch effort by Marks to turn the heat and go back-to-back in Oceanside.

“I knew (Marks) would come back and that the combo wouldn’t last very long; she’s such a great surfer and she’s always inspired me, so that was special,” Lindblad explained. “This brings my confidence up, and I’m really looking forward to Portugal and the rest of the (Challenger Series) events.”

All of 17 years old, Lindblad now sits atop the WSL’s North American QS rankings and will focus her energies on the upcoming Challenger Series events. If she can get a couple big results there, it would be possible for Lindblad to graduate to the 2023 WSL Championship Tour, where she would join Marks and the rest of the world’s most elite female surfers.

“That was an awesome finals day with the waves getting a bit better, thankfully,” Marks graciously said afterward. “It’s a bummer the waves in the final got a little slow, and I basically had a five-minute heat, but a great job to Sawyer. This event is amazing; there’s more and more girls every year. It’s really cool to be a part of helping inspire this next generation, and they inspire me just as much.”

But Lindblad wasn’t the only San Clemente original to top the podium in Oceanside. Rachel Tilly, who grew up in the area but has been going to school in Australia, returned home to California to compete in the longboard division.

“It’s so good to get a win out here alongside these incredible women,” Tilly said, smiling when it was all over. “The vibe of this event is so great, and to see all the young women out here help encourage us even more—we just want to keep inspiring them for years to come and hopefully see them up here one day.”

The next big event on the WSL calendar will be the EDP Vissla Pro Ericeira, which runs from Oct. 1-9, and is one of the marquee contests that will decide who makes the cut for the 2023 Championship Tour. There’s a host of local talent that could make the jump with a couple solid results. Stay tuned!