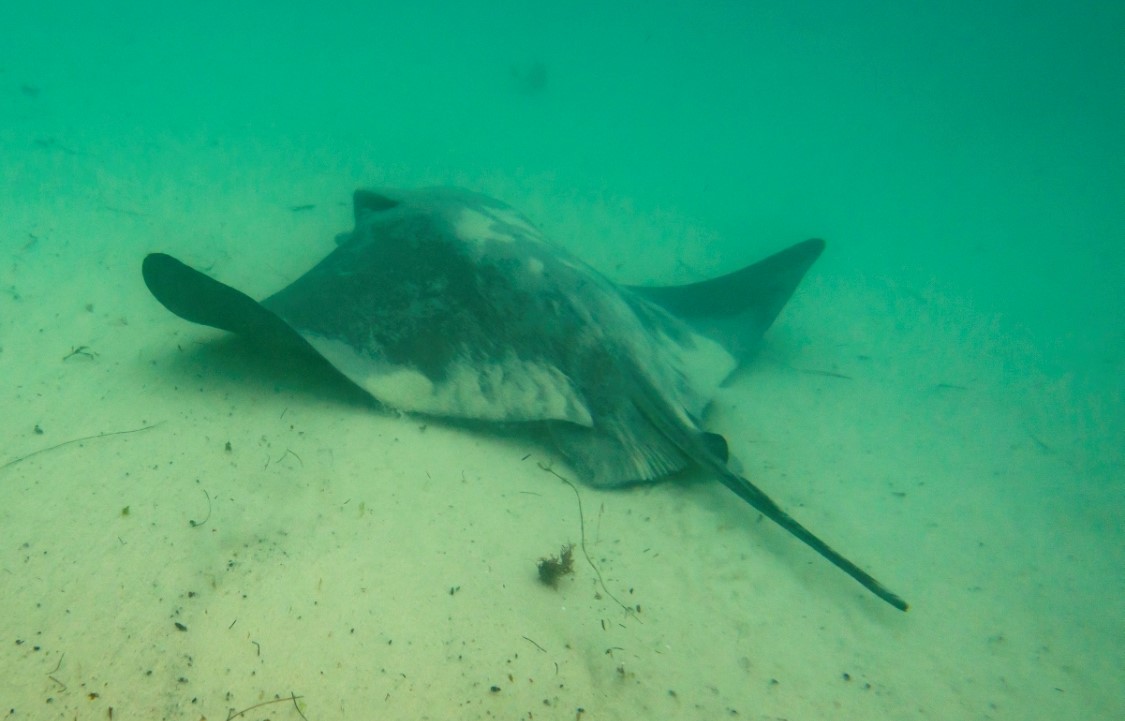 Beachgoers are not the only ones enjoying the warmer water temperatures this summer, as stingrays may also be seen along the shoreline throughout the season.

The Ocean Institute and OC Lifeguards offered tips on how to avoid getting stung by using the Stingray Shuffle and how to treat a stingray injury.

Warmer waters in Dana Point, with water temperatures in the high 60s over the past holiday weekend, have caused more sightings in the harbor and along local beaches.

“The water has been super warm lately, so that might have brought more rays around—their numbers usually increase when the water gets warmer than normal,” Ocean Institute Public Programs and Volunteer Manager Sara Vaughn said in an email.

Stingrays are more abundant in warm, calm waters, according to research from the Shark Lab at California State University, Long Beach. The Shark Lab found that reports of stingray-related injuries have increased nationally each year.

The warmer water has also made for better visibility, Ocean Institute Director of Education Riley Russell said in an email, “since we don’t have as much plankton in the water.”

More transparent water and better visibility mean more sightings in the harbor “because people walking along sidewalks and docks can most likely see further into the water or even the bottom,” Russell said.

“Plus, an increased number in summer visitors means we have an increased awareness of the presence of rays,” Vaughn said.

While State Parks officials say they’ve seen a normal amount of stingray-related injuries at Doheny State Beach in the past few weeks, Bryan Etnyre, the public safety superintendent for the State Parks Orange Coast District, said the increase in beach visitors and warm ocean temperatures contribute to an increase in stingray sightings in the summer months.

Photographer Craig Hatfield told Dana Point Times that he was stung in the foot by a stingray in chest-deep water at Salt Creek Beach last year. Hatfield stepped on the stingray after going over a wave, resulting in the stingray’s barb going through his surf bootie, or wetsuit boot.

The initial sting was not too painful, Hatfield said in an email, but “became excruciating as time went on.”

By the time he got home from the beach and was able to soak his foot in hot water, the pain continued to increase until he ended up at an emergency room. Hatfield was treated with painkillers and antibiotics, and, by the next day, could walk on his foot.

“Lesson learned,” Hatfield said. “Be careful out there in the water and shuffle your feet when going out in the water.”

According to the Shark Lab, stingray-related injures often occur in the afternoon when the tide is lower and water is warmer—when most people tend to be using the beach.

If a beachgoer gets stung by a stingray, Vaughn said to remain calm and get out of the water.

Round stingrays are also the most abundant stingrays found in Southern California, according to the Shark Lab.

“Round rays sting with a barb that causes a physical injury, as well as the sting. There may be bleeding around the injury that should be controlled,” Vaughn said, adding: “Control any bleeding that may occur with direct pressure. If there is a large section of the spine present, remove it.”

Vaughn noted, however, that “a vast majority of stingray injuries are very mild and rarely cause any larger problems.”

While it is a common misconception, it is not recommended to urinate on the body part that’s been stung, Vaughn said.

Hot water will break down the venom in the sting, so Vaughn recommended that those who have been stung submerge the body part in non-scalding hot water.

OC Lifeguards, a marine safety provider for OC Parks beaches in South Orange County, further recommends soaking the wound in water “as hot as you can stand for half an hour to 1½ hours or until the pain is gone.”

The Shark Lab also recommends disinfecting the wound after soaking and watching out for infection as it heals.

The Ocean Institute recently filmed a stingray safety video called “Taking the Sting out of Stingrays” with MedTac, short for “Medical Tactical,” a group that teaches bystander care skills, which offers more info.

To prevent stingray injuries, Vaughn recommends that beachgoers shuffle their feet as they enter the water.

“Instead of lifting (your feet) and stepping, you minimize the chance of stepping on a ray and getting stung,” Vaughn said. “This gives the ray a warning that you’re coming and gives them a chance to swim away.”

OC Lifeguards also recommends the “Stingray Shuffle,” explaining that stinging “is an automatic reflex, which can only happen when they are stepped on.”

Stingrays bury themselves in sand to hide from predators and feed on shellfish and crustaceans, OC Lifeguards said, making them easy to miss in shallow waters. Shuffling helps to scare the rays from their hiding places.

According to the OC Lifeguards website, “Stingrays are not aggressive; however, their sting is extremely painful,” also noting that some people experience severe allergic reactions to getting stung. OC Lifeguards asks that beachgoers always report stingray injuries to the lifeguard on duty.