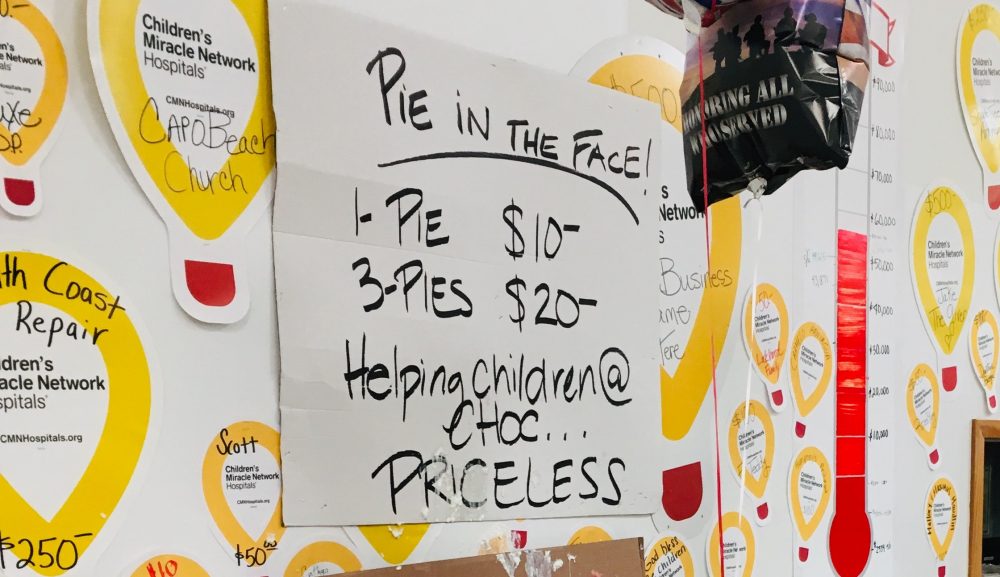 Letter to the Editor: Pie in the Face

“Orange County is on the country’s top 10 list for food insecurity,” according to UCI. Almost 20% of the people in OC go to bed hungry. NPR recently wrote, “Americans toss out about $161 billion worth of food each year. This equates to about one-third of all food produced in the U.S. being wasted or lost.” Meanwhile, governments are working hard to reach 75% landfill diversion by 2020.

Food waste is an environmental issue; also a social justice issue. It didn’t occur to me until last Saturday there was so little awareness. I was at Costco when they were doing a fundraiser for CHOC Hospital. First, salute to Costco for their continuous effort for the cause. On this day, it was a big effort. In the checkout area, a woman with whipped cream on her body was sitting under a sign “PIE IN THE FACE! 1-PIE $10. 3-PIES $20. HELPING CHILDREN @ CHOC . . . PRICELESS.”  A kid was using a mic to ask people to participate in “pie in the face.”

I’ve done many types of fundraisers for nonprofits. But I was surprised to see this method. I told Costco there were homeless outside; this was wrong. The immediate response was that it was about catching people’s attention to donate for a good cause. Yes, a good cause. There were many ways to do it. It didn’t have to be wasteful. They listened, but couldn’t interrupt the program planned by upper management. I believe they won’t do such “public education” again. Later, I told some friends about it. No one thought there was anything wrong. It made me wonder how many people left Costco with the idea of fundraising with “pie in the face.”

My intention of writing this letter is not to criticize anyone. Everyone makes mistakes. We learn from mistakes. I hope this letter would raise awareness on food waste and food insecurity. Many of us are lucky to live comfortably in this affluent place called Orange County. We shall be mindful to avoid the mistake of “let them eat cake.”