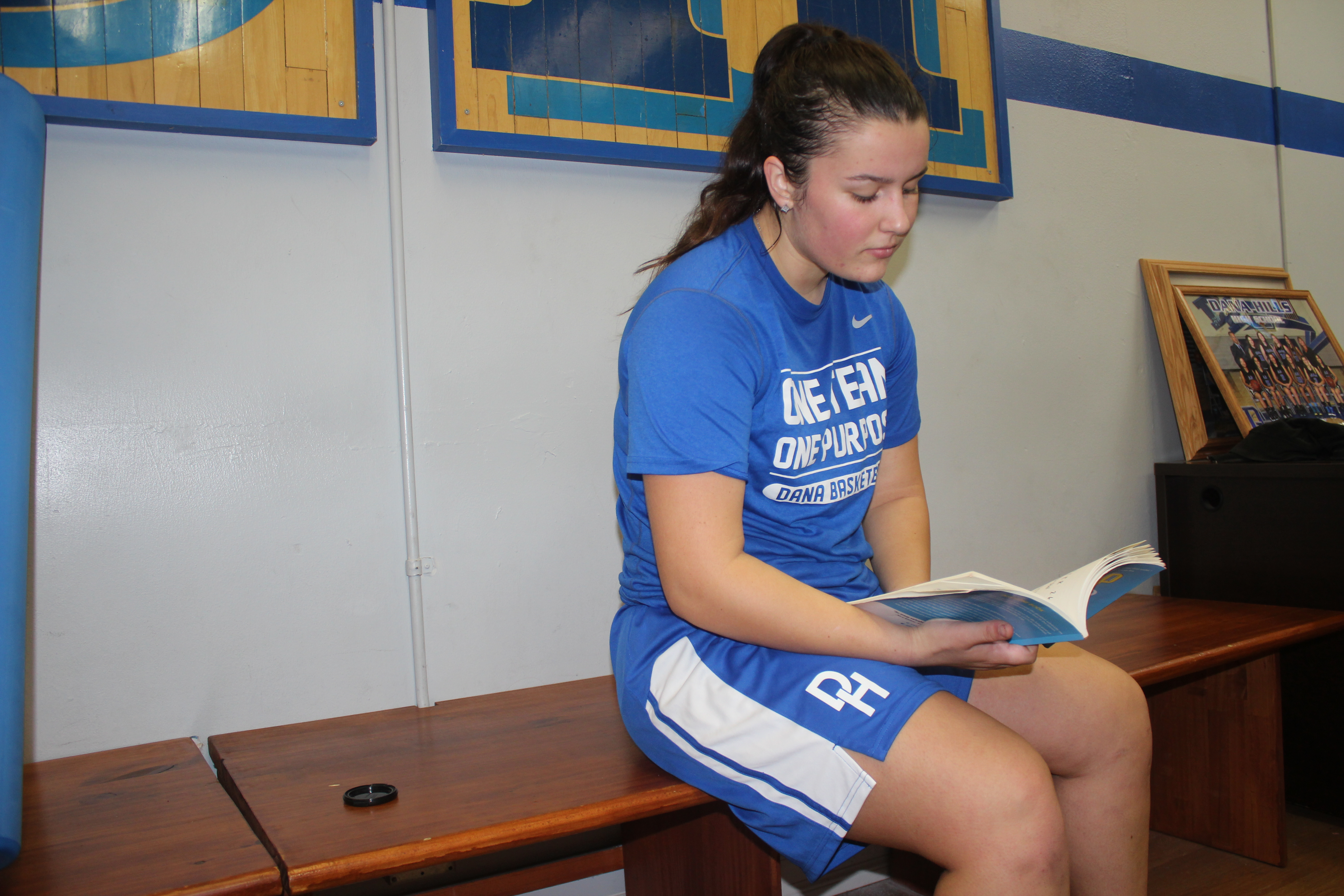 Dana Hills senior Alex Williams was searching for the right message to send the rest of the Dolphins basketball team one night after suffering back-to-back losses in the Ocean View Tournament in December.

The Dolphins had only one loss on their resume when they entered the tournament, and had now felt the sting of defeat twice in consecutive games. After thinking it over, Williams recalled a phrase from what has become the Dolphins’ secret text this season.

“Growth is a plateau, it’s not immediate. It’s steady, and then you grow,” Williams remembers texting the team that night.

The quote is from Joshua Medcalf’s inspirational Chop Wood, Carry Water, a book the Dolphins have spent the year dissecting and discussing amongst themselves in weekly study sessions. The book preaches the inherent value of enjoying and respecting the process of one’s work, rather than focusing on the final outcome.

After being asked to read the book by head coach Anne Honey, the Dolphins are true believers in the process and haven’t lost a game since Williams’ group text back on Dec. 6.

Dana Hills is playing with a team-first approach that has yielded historic results. The Dolphins’ record of 12-3 is the team’s best mark through 15 games in over 12 years. The Dolphins competed in the SoCal Holiday Prep Classic in San Diego over the winter break and went 4-0, winning their division while outscoring their opponents 221-116 and extending their winning streak to seven games.

Every week, the Dolphins have what they call “Binder Friday” after practice. The team huddles in Honey’s office tucked away in the corner of the gym and they break out their big blue binders, which are full of everything from schedules to inspirational quotes. It’s here where the team keeps their notes and thoughts on the book they’ve been exploring over the past four months.

Chop Wood, Carry Water is philosophical and dense, Honey said, and the team usually breaks down one chapter a week.

One week the team can talk about dealing with adversity.

“A wise man once said, hardship often prepares ordinary people for extraordinary destiny,” a line from the book reads.

Other days the team conducts exercises, like writing down four characteristics each player has that they feel are essential to who they are. The players then share those with the team.

“It separates us from other teams,” junior guard Peyton Romo said. “We’re so close and we have so much chemistry. Other teams don’t have that like we have it, and the fact we have (a book) to relate to is huge.”

The discussions also help the team communicate better on the floor. The team’s chemistry is evident during practices, where the Dolphins’ gym is always full of chatter.

During one practice over the winter break, the Dolphins were short-handed due to the holidays. The handful of players there had to run passing weave drills down the length of the court and had to do them almost continuously for several minutes given their small numbers. As the first groups finished up and tried to catch their breath, their energy never wavered as they cheered the remaining groups on to the finish.

Their effort and communication on defense has been a particular point of pride for the Dolphins this season. The Dolphins are holding opponents to an average of 38.6 points per game. In last week’s SoCal Holiday Classic in San Diego, the Dolphins dominated Marshall of Los Angeles 58-16, and shut down Carlsbad in a 52-10 victory.

The team study sessions have made a profound impact on several of the Dolphins players, including sophomore Olivia Chambers. As a freshman on varsity last year, she thought too much about what she was doing wrong. Now her attention is elsewhere.

“This book and this season helped me realize how I need to move on to the next play and focus on helping my teammates,” Chambers said.

For Romo, the team’s leading scorer and co-captain, the lessons of this year have helped ease the pressure of scoring crucial baskets in the final minutes of close games.

The book has served many purposes for the Dolphins, both mentally and practically, off and on the court. They are gearing up for the second half of the season, and a run through the Sea View League. But the Dolphins aren’t focused on the final destination just yet. They’re still enjoying grinding out the details.

“They’ve fallen in love with the process. We care about every possession, every defensive slide,” Honey said. “They’ve sweated together, they’ve done the work together, and I love when it translates onto the court.”