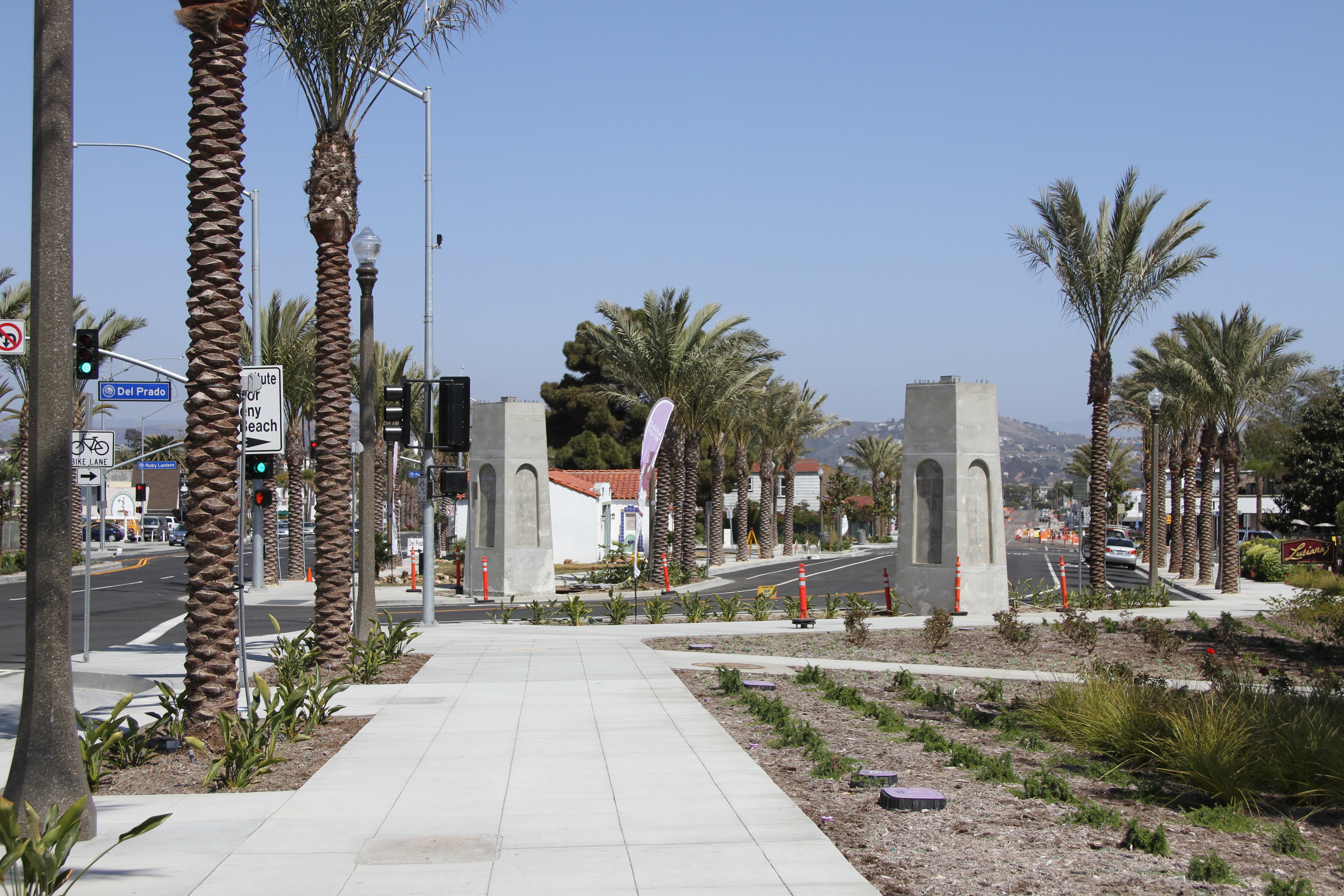 An update on the progress, praise and protests of the city’s 1-mile downtown revitalization plan

As construction progresses in the Town Center–Lantern District, Dana Point citizens for and against the city’s approach to the project continue to disagree on the direction being taken in carrying out guidelines set in the Town Center Plan.

Construction on the Del Prado Avenue side of the district is progressing ahead of schedule.

The Chamber of Commerce, in conjunction with the city, has just finished its third successful month of the Shop Del Prado shopper awards program.

And a group of citizens opposed to the direction the city has taken in the district has formed an initiative to protest decisions of city officials—with regard to the granting of variances and proposing changes to the Town Center Plan document—alleging their actions undermine the Town Center Plan and favor developers over residents.

With construction complete on the Pacific Coast Highway side of the district—with the exception of banner poles in the works—the city is now well into Phase 2A of the streetscape improvements along Del Prado Avenue. This phase, which was started in January, is expected to be complete in September.

The city’s latest update details work slated for April 20 through May 8, barring bad weather or any other barriers to progress.

Street lights and trees have been installed along the inland side of Del Prado from Ruby Lantern to the Post Office and parking along this stretch has been reopened. Clean up and landscaping is all that remains to be done.

On that same side of the street, between the Post Office and Golden Lantern, street, sidewalk and street light construction will take place during this time, along with landscaping and the planting of trees.

The opposite side of Del Prado between Ruby Lantern and Violet Lantern will see heavier work including demolition in the street, construction of new sidewalks, curbs and gutters, the installation of irrigation, underground electrical work, street lighting, trees and landscaping.

The arched entryway to Del Prado is underway, with base towers now standing on either side of the southbound entrance to the street. The archway that will be installed between the two towers, along with other components, are being completed off-site.

According to City Engineer Matt Sinacori, the city is making every effort to keep parking open on at least one side of Del Prado within construction zones, but acknowledges that there may be times it could be impacted. During construction hours—weekdays from 7 a.m. to 5 p.m.—one southbound lane will be open the majority of the time and access to businesses will be preserved as much as possible.

Sinacori can be contacted directly at 949.248.3574 or msinacori@danapoint.org for questions. Residents are also invited to subscribe to email updates by sending an email to ssharke@danapoint.org.

The Chamber of Commerce has been working in conjunction with the city to provide a shopper incentive program to help Del Prado businesses during construction.

Now in its fourth month, Shop Del Prado has awarded prize packages—donated by other local businesses including shops, restaurants and hotels like the Ritz-Carlton and the St. Regis —to three winners who submitted receipts for money spent at Del Prado businesses. Every $10 in receipts earns shoppers one entry into a monthly drawing.

“Businesses have suffered under all the construction and the fact that we’ve had other local businesses step up to support them has been fantastic,” Heather Johnston, the chamber’s executive director said.

“I did my part,” said Suzie Kelley, the March winner, who was presented Tuesday with a prize package including a one-night stay for two at the Blue Lantern Inn, breakfast or lunch at Bonjour Café and a $50 gift certificate to Killer Dana Surf Shop. “I spent about $2,100 at EZ Green Bikes. Robbie built me a custom Madsen bike with a big tub in the back that I can put four grandkids in. I love it. And I am really excited about this prize.”

Kelley said she was able to find parking very easily in the area and construction impacts in no way discourage her from shopping on Del Prado.

“Actually, I like to come see what’s going on,” Kelley added. “I like to see the progress.”

Lin McMahon, general manager of the Blue Lantern Inn, said her company is also pleased with the progress.

“We have had no complaints about it from our guests,” McMahon said. “The project has been very exciting for us, and will be even more exciting when it’s done.”

Lora Jean Kosinski, salon owner, said she took over the former Azalea Salon in November, and has since given the space a facelift and established a talented staff and a growing clientele.

“It’s up-and-coming and it’s got a good feel,” Kosinski said of the decision to locate in the Lantern District. “I went to a city meeting where it was mentioned that there would be an archway that said ‘The Lantern District’ and I really liked the name. I chose The District because I wanted a name that represented the city and my business as well.”

Construction is also underway in the district for a brew pub (on the PCH side) and the historic Blue Lantern Café building at the corner of Del Prado and Blue Lantern is being prepared to welcome a new restaurant.

Permits for the restoration of the Blue Lantern Café building have been issued and the first thing people will notice is the removal of non-historic elements that have been added to the building over the years, according to John Tilton, city architect and planning manager.

Click on this link to see project renderings: BlueLanternCafe

A group of residents has kicked off an initiative they say has nothing to do with picking on anyone in particular but instead intends to give Dana Point voters a chance to tell the city what they want in Town Center, an opportunity they feel was lacking in public meetings.

Betty Hill, one of the three who took the initiative to the city and are collecting signatures—Sandy Iverson, Roxanna Watrous and Hill—said they do support development and the Town Center Plan, but oppose city officials’ decisions to grant variances and make changes to the plan for developers proposing projects in the district and the manner in which money has been spent so far.

“The city is proposing permanent changes to the Town Center Plan that do not align with its intent,” Hill said. “The plan was a well-thought-out document and the city’s actions are not reflecting its intent—the intent of residents it set forth.”

Following is an explanation of their effort from Hill:

“The purpose of the Initiative is to promote the Town Center area as a ‘primary business district in the city with a small town village atmosphere,’ containing pedestrian friendly businesses, shops and restaurants, with decorative courtyards and outdoor seating areas. If that sounds familiar it’s because that is actually a primary goal of The Town Center Plan itself. The initiative also states that ‘professional and business/office uses are preferred uses on the second and third floors of all new construction.’ That’s in the Town Center Plan too (policy 1.6 on page 14). That’s what residents expect from the $20 million already invested by Dana Point taxpayers.

We know that past Councilmen Bill Brough and Steven Weinberg and a current member, Mayor Carlos Olvera, approved a project that allowed significant exceptions to the Town Center Plan. The city is currently proposing major, permanent changes to the plan. But the plan is a product of many hard fought community compromises, such as the 3 floor limit and an extra 5 feet of height from 35 feet to 40 feet for first floor retail purposes.

The initiative supports that community effort. It excludes developer loopholes in the Town Center Plan that have already been used which violate the intent and requirements of the plan, such as adding a fourth floor of condos, elevator towers 19 feet over the 40-foot limit and parking concessions including in lieu parking fees of $15,000 per needed space instead of the city’s estimated cost of $40,000.

The initiative wants the city and developers to stick to the plan and follow the rules. Most importantly, the initiative gives Dana Point residents the chance they deserve to decide on the Town Center they want and determine the future of Dana Point.

A Planning Commission meeting is set for Monday, April 27, beginning at 6 p.m. at the Community Center gymnasium, 34052 Del Obispo Street.

The public is invited to comment at the meeting or to send written correspondence to the city.