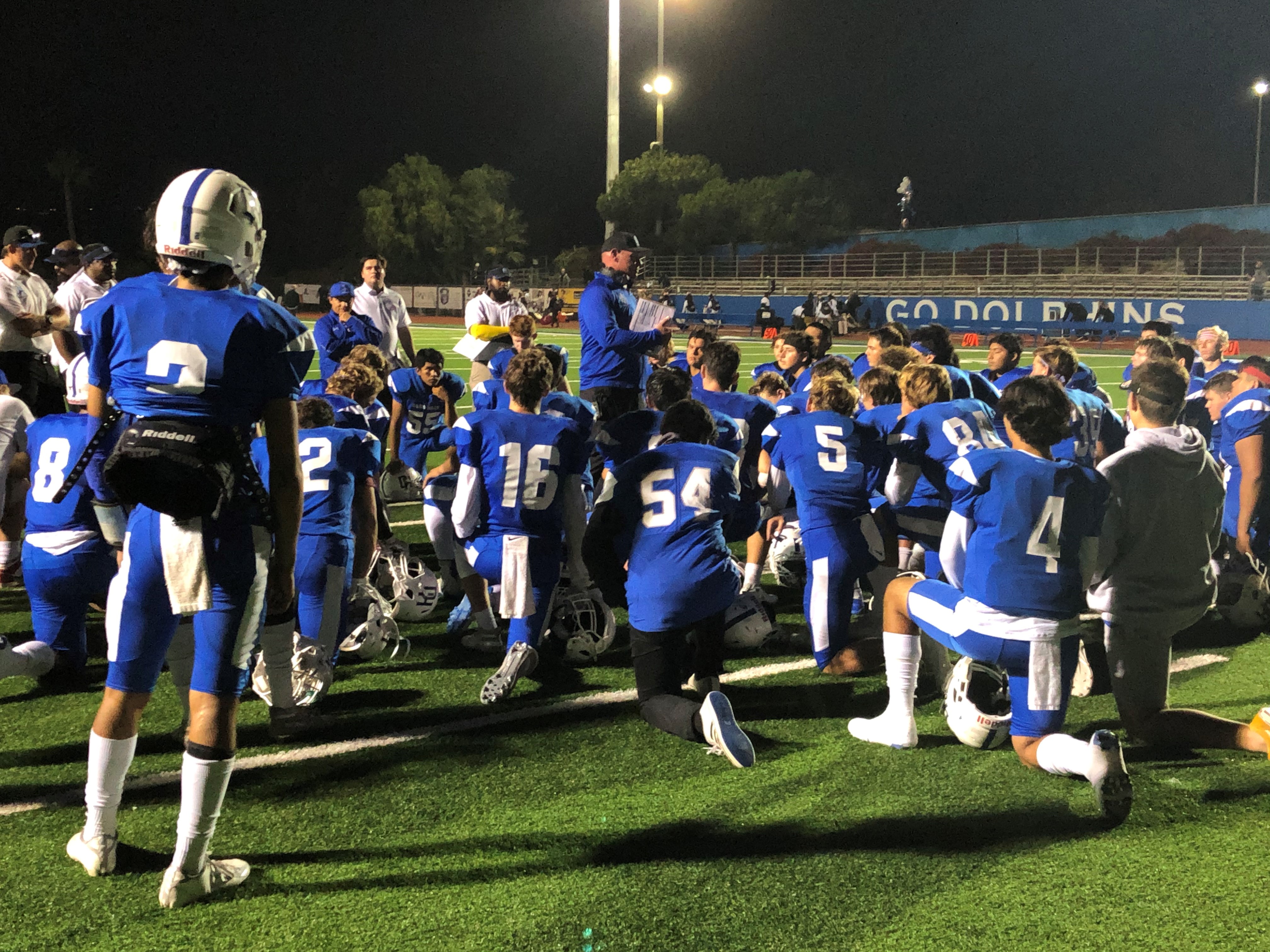 Dana Hills clawed back to take a lead in the fourth quarter and tied it up again late, but Laguna Hills went for it all in overtime and got it with a two-point conversion for the win, 28-27, to hand the Dolphins their first loss of the season in both team’s Sea View League opener.

“Always,” Laguna Hills coach Mike Maceranka said of his consideration of the two-point conversion. “You’ve got to go for two. They’re wearing us down. They’re very talented, and I knew we probably weren’t stopping them. All or nothing.”

With the game tied at 20 after regulation, Dana Hills (6-1, 0-1) got the ball first in overtime, and scored in three plays. Zack Saavedra hit Noah Simpson on back-to-back passes, and Tristan Vanderlinde scored on a 7-yard run for the 27-20 lead.

“We put ourselves in the position we wanted to be in,” Dana Hills coach Phil Skinner said. “It is what it is. Made some errors early on, played good football in the second half, and came back to be in a spot where we had a chance to win the football game. It just didn’t work out for us.”

Laguna Hills (4-2, 1-0) running back Mitch Leigber was the go-to man all night for the Hawks with 29 carries for 143 yards rushing, and on Laguna Hills’ fifth play of the overtime, Leigber caught his sixth pass from quarterback Hayden McKenna for his third touchdown and 108 yards receiving.

Trailing by one point, 27-26, Maceranka and the Hawks made the decision to go for two. Leigber ran a slant as the right outside receiver, and McKenna hit him quick for the conversion and the win.

“I credit our quarterback Hayden McKenna,” Maceranka said. “In the third quarter, he told me, ‘Hey coach, me and Mitch work on this play. Let’s do it.” We did it for a touchdown, and he said to do it again, and we did. Hard work pays off.”

Dana Hills opened the season with its first-ever 6-0 start, but the Dolphins are still looking for their first league win since the 2017 Sea View League opener, a 10-0 win over Laguna Hills. Both teams will leave the Coast View Conference next season, but stay league mates in the Pacific Coast League.

“This is a good football team on our sideline too,” Skinner said. “We’re going to make some noise still.”

Laguna Hills started the game off with a bang when Andre Whiteside took the opening kickoff down the Hawks sideline for 95-yard kickoff return touchdown. Laguna Hills missed the extra point.

The Hawks doubled their lead on their third drive when McKenna hit Leigber for their first big hook-up of the game, a 55-yard touchdown pass for a 12-0 lead. The Hawks’ two-point conversion failed.

Dana Hills finally broke through at the start of the second quarter when Aiden Frangipane plowed in for the one-yard score. Dana Hills missed its extra point, so Laguna Hills led 12-6.

The teams played defense back and forth for the majority of the next two quarters. Laguna Hills collected five sacks, and both teams got fourth-down stops in the third quarter.

Dana Hills took the lead early in the fourth quarter, when Saavedra hit McGrath on a short pass. McGrath spun way from Laguna Hills defenders and sprinted to a 70-yard touchdown pass. The Dolphins’ extra point gave them the lead, 13-12.

One play after a missed field goal, Laguna Hills grabbed an interception. The Hawks turned it into points two plays later on a 34-yard touchdown from McKenna to Leigber for the 20-13 lead with four minutes remaining.

Dana Hills responded with a two-minute, eight-play drive that was capped on a 23-yard touchdown pass from Saavedra to McGrath to tie the game, 20-20, with two minutes remaining.

Dana Hills got the ball back with 22 seconds left and had a chance to win it. The Dolphins made three strong plays starting from their own 23-yard line, and a 15-yard penalty against Laguna Hills on the final timed down set the Dolphins up for one last attempt for the regulation win.