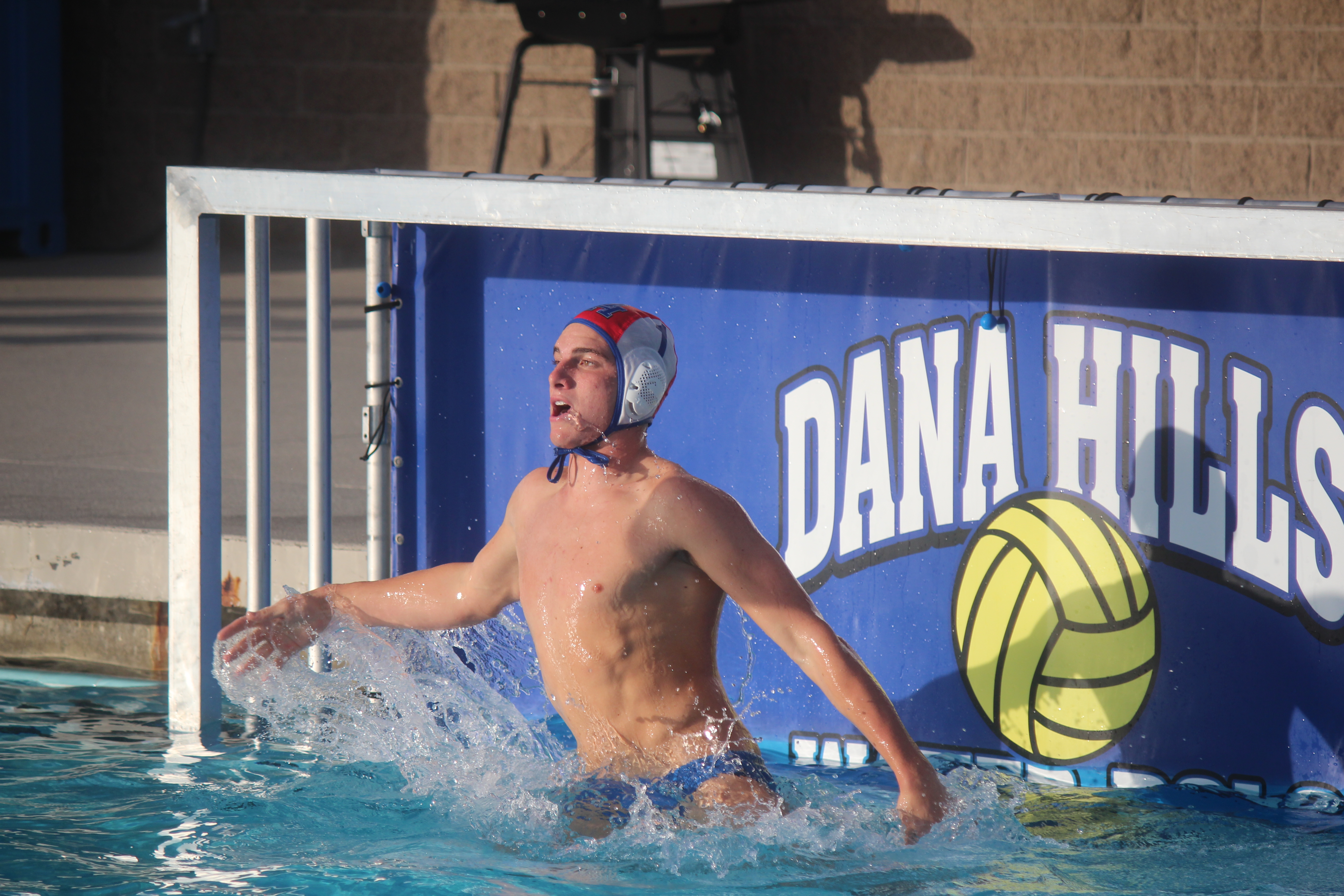 As the goalie for the Dana Hills High School boys water polo team, Zachary has the ability to set up the Dolphins defense, communicate to his teammates where the attack is coming from and, more often than not, bring it to a crippling halt.

The Dolphins are 19-6 on the season and have a commanding lead in the South Coast League, where they are the three-time defending champions. A large part of their success is a result of the team’s efforts on defense and a unit anchored by Zachary.

The senior currently leads Orange County in saves with 320 as of Oct. 30. If the Dolphins continue their winning ways, Zachary is on pace to lead the county in the category for a second consecutive year. The end result might be similar (Zachary had 416 saves last season and is on pace to match or surpass that number) but Zachary’s 2015 campaign has been remarkably different in terms of efficiency.

“One thing I’m impressed with this year is his save percentage is way up,” Dolphins head coach Matt Rosa said. “Last year, my goal for him was to have more saves than goals (allowed). But the percentage of goals against (in 2015) is really good. I’m confident his save percentage this year will be far and away the best in school history.”

Rosa estimated Zachary’s save percentage is currently hovering around 60 percent, an impressive number given the scoring nature of the sport.

With Zachary in goal, Rosa and his staff have been able to be more flexible on defense than in year’s past. On any given play, the Dolphin defenders can overload to one side of the pool, keying in on a certain offensive threat, knowing that the player they are leaving open as a result will have a hard time getting anything past Zachary.

With the defense swarming the ball, the Dolphins have been able to force turnovers at a high rate. Senior Bennett Williams leads the team with 49 steals, Jack McLaughlin has 42 and Kai Hanson has 35. As a team, Dana Hills has recorded 277 steals.

Dana Hills has held opponents to seven goals or less in 14 matches this year and have outscored their South Coast League opponents by a combined 85-33 margin in six games.

Zachary’s effort in goal, along with his teammates’ defensive effort, makes for clean-looking stat sheets, but the goalie’s impact can also be felt on offense.

When addressing his team’s strengths at the start of the 2015 season, Rosa saw how fast and athletic his field players were. The team was not especially strong in a half-court offensive setting, where game play slows down and the offense waits for plays to develop. Rosa, instead, wanted his players to push the tempo and develop a ruthless fast-break, counter attacking style.

With Zachary knocking down shots on goal, he has become the primary player in charge of igniting the counter attack. Zachary has worked hard at honing his outlet passing ability, which has led to plenty of fast-break goals for the Dolphins top offensive players like Williams, who Zachary has played with since the two were 12 years old.

“With (Williams), we’re kind of like the dynamic duo. I’ll block and he’ll shoot,” Zachary said. “It’s always been like that. We’ve been on the same club team since we were 12. We have a good connection.”

Zachary, who already has the school record for most assists by a goalie in a season, has 19 so far this year.

Zachary grew up playing water polo with his older brother, Brody, who is two years older. Brody Zachary, now a goalie for the Chapman University water polo team, was the Dolphins starting goalie during Riley’s freshman and sophomore years. Riley saw how his brother, who was slightly undersized at the time, made up for it by playing with an explosive style. Riley adopted the way his brother exploded out of the water toward the ball, rather than sitting in net and occupy space with length.

His explosiveness, experience and ability to read opposing shooters are Zachary’s strengths in goal. One intangible, however, is his competitive nature. On game days, as his coach and teammates can attest to, there is a heightened sense of things, as the goalie takes to the water, locked in and ready to play.