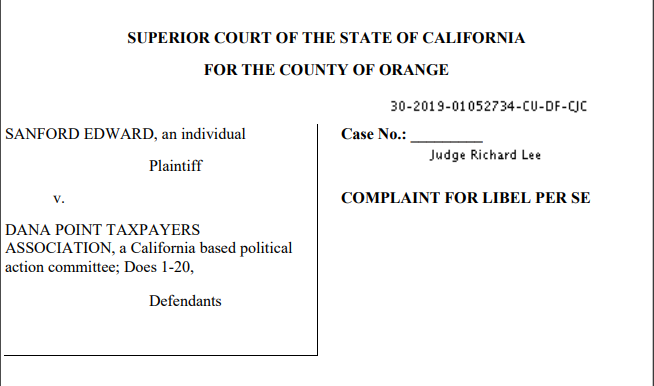 Edward, the developer for Headlands Reserve, LLC, filed the lawsuit for libel against DPTA regarding political mailers that were sent out leading up to the 2018 Dana Point City Council election. In the weeks prior to Nov. 6, 2018, DPTA published and distributed campaign mailers that opposed city council candidates Charles Payne, Mark McGinn and Joe Jaeger.

One mailer depicts all three candidates as puppets, with captions claiming Councilmember Debra Lewis teamed up with Edward to elect the three. Snippets of a lawsuit complaint the City of Dana Point filed against Headlands Reserve, LLC are highlighted to show the city accused Sanford of fraud after failing to pay more than $500,000 in an alleged contract breach.

Another mailer shows a photograph of Edward meeting with Payne and former Financial Review Committee Vice Chairman Buck Hill for lunch, with the caption, “Meet the kingmakers and the candidate.”

Following Edward’s accusation of defamation against DPTA, the defendants filed a strategic lawsuit against public participation (SLAPP) motion. A SLAPP is a lawsuit that is intended to censor, intimidate and silence critics by burdening them with the cost of a legal defense. Judge Richard Lee denied the motion in its entirety.

According to the minute order on the ruling, DPTA contended that the mailers comprised of protected hyperbolic speech and that Edward is a public figure. Edward countered that the speech is defamatory by implication and has evidence that the publications were made in malice.

Judge Lee concluded that the statements in the mailers concerning the 2016 lawsuit are reasonably susceptible of defamatory meaning against the plaintiff.

However, the court also concluded that the plaintiff’s claim arises from protected activity, “because the mailers in question are statements in writing made in a place open to the public or a public forum in connection with an issue of public interest,” per Code. Civ. Proc. 425.16(e)(3). The mailers had been disseminated to voters in Dana Point during the 2018 election campaign season.

An Anti-SLAPP motion involves two steps: First, the court determines if the cause of action arose from protected activity; second, the court considers whether the plaintiff has demonstrated a probability of prevailing on the claim.

According to precedent set in Oasis West Realty, LLC v. Goldman, only a cause of action that satisfies both prongs of the anti-SLAPP statue is a SLAPP, subject to being stricken.

“When a SLAPP motion is filed, that freezes all discovery,” Edward said. “Now we’re going to work very hard to reveal who was behind these mailers. Over time, this trial will show who was involved.”

Bradley Hertz represents DPTA in this litigation and issued the following statement:

DPTA plans to appeal the trial court’s ruling to the Court of Appeal.