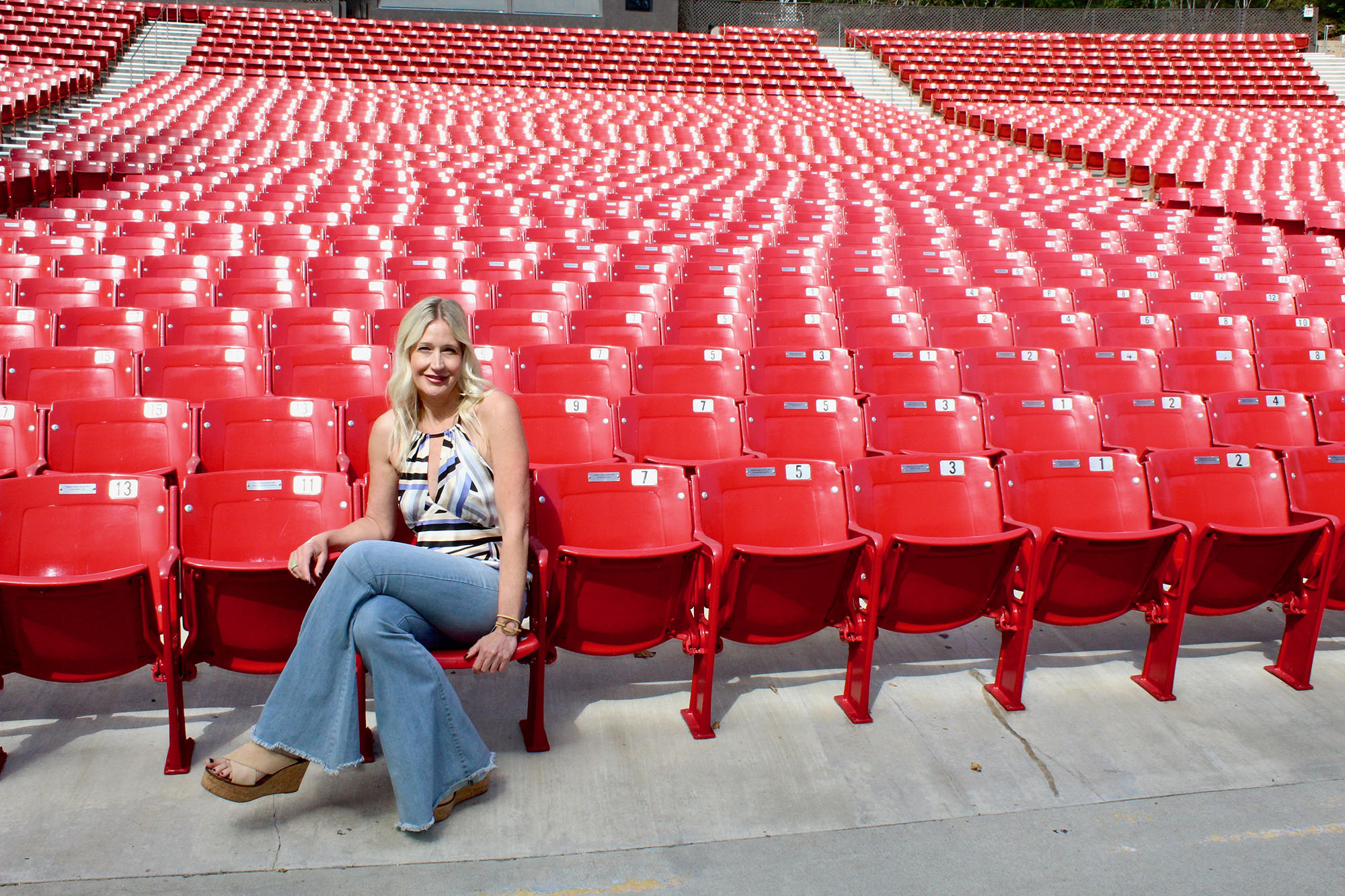 The Festival of Arts Pageant of the Masters is one of Laguna Beach’s most popular art exhibits of the year, looked forward to by many.

For the past 90 years, the Festival and its accompanying Pageant—which is going on its 89th year—have been driven by the work of the artists, performers, volunteers and many others who contribute to the success of the annual event.

One such individual is Joy Shirkani-Monson, a sculpture performance volunteer from San Clemente who’s worked for the pageant for 30 years.

“When I was 8 years old, my mom had heard about the Pageant … I have two older sisters, and she said to the three of us, ‘Let’s go down and try out to be in the Pageant,’ ” said Shirkani-Monson.

That first year, her mom, Nancy Martin, was the only one who auditioned to be cast in the show. She later went on to become the casting director, with 2022 marking 39 years in said position.

Over the years, the Pageant has remained a family affair for Shirkani-Monson, as she and her family have been annual volunteers and enthusiasts of the annual South Orange County event. In 1984, Shirkani-Monson made her first Pageant appearance, when the Pageant commissioned a local artist, Jane Shuss, to create a one-of-a-kind painting to be showcased.

At the time, Director Dee Challis and Casting Director Charles Shilling reached out to the Monson family to invite the young Joy to be a centerpiece in the painting. She and her sister, Kim Shirkani, along with two other kids, were photographed running up and down Emerald Bay beach in Laguna Beach.

Later that summer, the piece, titled Emerald Bay, was showcased in the Pageant and became the first piece in which Shirkani-Monson performed.

Ever since she got the courage to step onto the stage at 10 years old, she has been loving every moment.

“Now, when it’s over for the summer, it feels like the end,” said Shirkani-Monson. “When you see those same people again, it really creates such a special environment, because you do see the same people year after year; it’s like a family.”

This will be Shirkani-Monson’s first year back at the Pageant since the coronavirus restrictions have been lifted.

In the previous years, 1942-1945, the Pageant production and art Festival were halted because of World War II. The year 2020 was the first year since then that the Festival and Pageant were canceled.

“We had our first rehearsal last Thursday (June 2),” Shirkani-Monson said of Pageant-life post-hiatus. “It was the best feeling being back on that stage. It felt so nice, because I really missed it.”

The theme of this year’s Pageant and Festival is “A Wonderful World,” where the artists take the audience on a journey throughout the different places of the world to discover the beautiful art within.

Starting this July, Shirkani-Monson will perform in a sculpture piece titled The Fountain of the Observatory by Jean Baptiste Carpeaux. For the local volunteer, this will mark her second outing as a performer for this particular piece, which the Pageant had displayed in a previous showcase.

The audition process to become a volunteer can be exciting and, fortunately for auditionees, very straightforward.

First, there are tryouts in January in which they take body measurements and pictures. Then, if you are chosen, it’s followed up by three rehearsals in June—one daytime walk-through and two dress rehearsals.

Between the months of January and June, the set is built, the costumes are made and headpieces are created to fit that year’s particular theme. Finally, the show kicks off in July with two rotating performance casts: seven nights on, seven nights off.

During performance nights, it takes two to three hours for the performers to go through hair, body makeup and headpieces.

Anyone below the age of 18 performs in beach paintings, art deco and porcelain pieces, then after the age of 18, volunteers can start performing in the “adult pieces.” These pieces are the ones in which full nudity is necessary for the painting or sculpture chosen.

Shirkani-Monson did eight years of “minor age” performances, then once she turned 18, she started to do the adult sculpture pieces.

“They are done tastefully, and it’s very liberating to be fully naked on a stage,” Shirkani-Monson said. “It’s a really unique experience, and the pieces are usually spectacular.”

For Shirkani-Monson, the Pageant has become a family-oriented tradition spanning through three generations. She introduced her five kids to the Pageant, and they all have performed on the stage each year, some longer than others.

“(I had) really happy, positive times down there … thought my kids going through the same thing, to hang out with Pageant friends just like I did … it’s a one-of-a-kind place,” Shirkani-Monson said.

“Since I started when I was 10, the Pageant in the summer, it’s almost like a summer camp, and as you get older, it becomes a summer camp for adults,” she continued. “It’s a place where I had my first crush, my first kiss, my first serious boyfriend, and found my best friend. For me, it’s such a magical, special place.”

Even though Shirkani-Monson has expert level experience with performing on the Pageant stage, she still gets nervous before each show. Whether it’s the thought of sneezing during a still shot or having moths fly on her face, she still gets the jitters.

“I’m not sure why I do, but I do get nervous—some nights more than others,” she said. “Maybe because it’s a live performance and some poses are harder (to sustain) than others. Things like that definitely come into play.”

For nearly a century, the Festival of Arts Pageant of the Masters has brought together local artists, musicians, jewelers, sculptors, photographers, performers and art enthusiasts. Furthermore, the event has created a welcoming and educational environment for everyone who attends.

“It’s a great date night; to go down there, have a glass of wine, see the art, listen to some music and see the Pageant performance,” said Shirkani-Monson, who recalled her favorite theme from previous events as the “Portrait of an Artist.”

The concept of said show was to illustrate the inner thoughts, reasonings and roots behind the artist’s inspiration for each created piece. It had a very dark and sinister tone that paralleled the artist’s tragedies.

According to Shirkani-Monson, many eventgoers disliked the theme that particular year, but she found it very educational and fascinating.

Shirkani-Monson describes art as something needed and important in society, adding that television shows, movies and the academics within schools only briefly touch on the subject of art, but the Pageant is able to ignite that interest.

“I think there’s a lot of education in art,” said Shirkani-Monson. “The show is a fun way to have people learn about art, because we, unfortunately, don’t get to have a lot of that in school. (It’s) a really neat way to teach kids art without them realizing they’re being taught.”

From art to music to live performances, the Festival and Pageant have something to share for many eyes to enjoy. Shirkani-Monson has been volunteering for 30 years and will continue to return for years to come.

“I definitely would say that it’s just a happy, fun environment, and I think a lot of it reminds me of my youth,” Shirkani-Monson said. “I just have so many memories; that’s why I keep coming back year after year. I don’t think I want it to end. I just love it.”

Whether it’s date night, an educational field trip, a family tradition or something new to attend, the Festival and Pageant have been set at the heart of Laguna Beach for decades and continue to create happy memories to all who are involved.

The Festival of Arts Pageant of the Masters will be held this summer from July 7 to Sept. 2. Tickets are now on sale at foapom.com, where more information about the event can also be found.