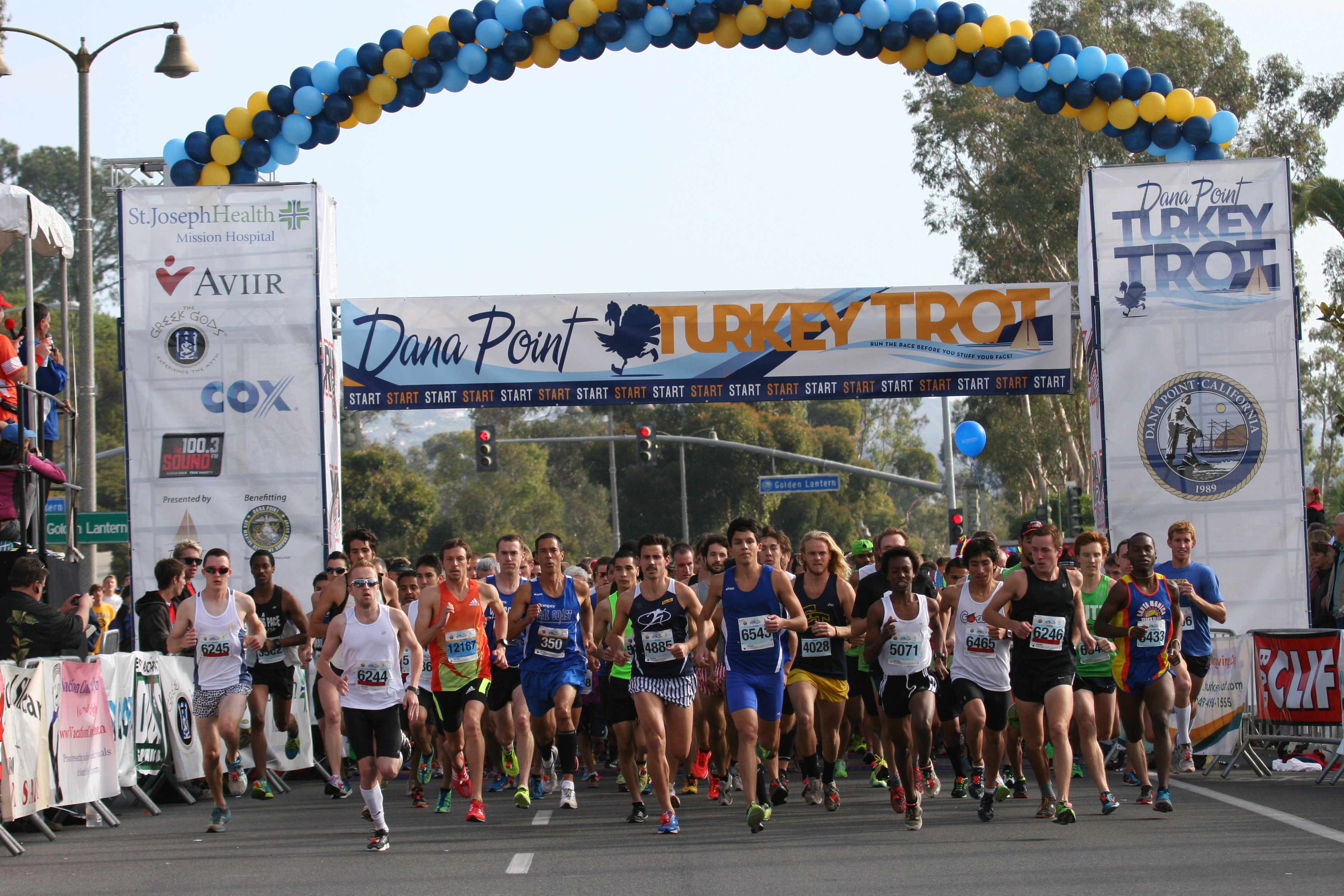 It is November and everyone in Dana Point knows what that means. The Dana Point Turkey Trot, a 10-kilometer race over a scenic course above the OC Dana Point Harbor, is back. Created by the Dana Point Chamber of Commerce in 1978, it is meant to counteract the gorging of oneself at Thanksgiving dinner.

The inaugural event boasted about 300 runners with race categories by age and gender. Races began at the Dana Point Health Club at the corner of Del Prado Avenue and Amber Lantern. In 1979, the late entry fee was just $8. By 1981, Andy Loomis, the chair of the chamber, had routed the course through the Lantern District, down Pacific Coast Highway, into the Harbor—to the then-Marine Institute, now the Ocean Institute—and back to the health club.

A new emphasis was placed on the event in 1983 as preparations were being made for the 1984 Summer Olympics in Los Angeles. As a result, a new race course was sanctioned by the United States Olympic Committee and 50 percent of the profits went to support the ’84 Olympic Games. Bobby Satterwhite of Irvine set a new record of 31:14.4 that year among 1,200 runners on a light rainy, Thanksgiving Day. Entry that year was $8.50.

In 1985, William Lyon Co. was the major sponsor, as they were opening their new development Harbor Heights within Dana Woods, “an exclusive development of executive-style, ocean-view homes above Dana Point Harbor.” Dana Point was also growing as Golden Lantern was opened north of Camino Del Avion where it had previously dead-ended at Dana Woods Drive.

As the race grew in runners—to more than 1,500—it also grew in spectators. And it grew and it grew, reaching 2,800 in ‘89. That year brought new meaning to “family sports” as three-wheeled baby strollers appeared on the track with the course wholly in the Harbor with no steep hills. It also brought controversy. The race was criticized for serving beer at an event benefiting an anti-drug program at Dana Hills High School. The county chapter of Mothers Against Drunk Driving (MADD) cited the conflict of the race slogan “Drug Abuse is Life Abuse” with the promotion of having beer for breakfast with a “5 o’clock somewhere” mentality. But since the drinking area was controlled, age limits were imposed and drinks were limited, the event continued.

The now consistent course throughout Dana Point Harbor and Doheny State Beach was billed as the second largest turkey day race in the United States with 3,000 runners and a crowd of 5,000 in 1992. It also brought a new running category, a 5K dubbed the “Rudolf Runoff,” where runners dressed in costumes. There were Santa Clauses and Santa’s running reindeer. Ed Conway joined in the fun, wearing his brightly colored Macaw bird hat. There was even a turkey or two running which probably helped set up the kids “Wobble” run for future years.

By 1997, there were 28 states represented by more than 4,500 runners, second only to a race in Dallas. That fundraiser netted over $45,000. Today we are looking at attracting about 16,000 total participants, and the Turkey Trot has become the nation’s sixth largest Thanksgiving Day race. Now with several dozens of sponsors, it too has become “the” Dana Point event to attend.

Races include a 5K, 10K and kids “Gobble Wobble” and many running sports booths to tout the latest in what to wear or how to train. The event has now been named one of America’s best Thanksgiving’s Day race by Fitness Magazine and is now sanctioned and certified by USA Field & Track. Even wikipedia.org lists the Turkey Trot as one of the most notable races.

So rather than traveling to far off places, such as Oklahoma City; Springfield, Mo.; Buffalo, N.Y. or Andover, Mass., stay here and “run the race before you stuff your face.” And if you are still not convinced, Fodor’s Travel Guides listed Dana Point in its top “10 Best Thanksgiving Destinations of 2013” in the world. Dana Point Chamber, you rock.