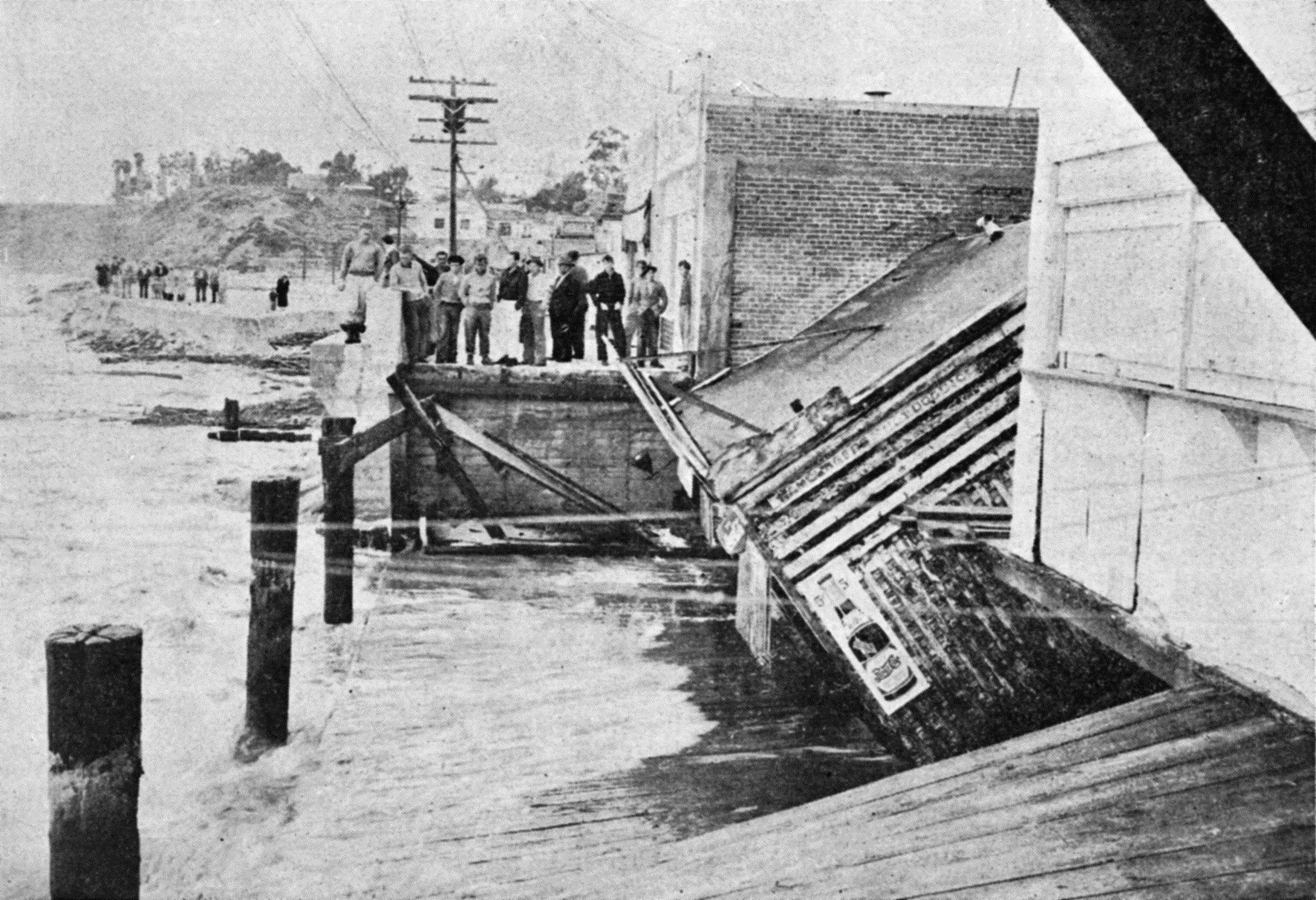 San Juan Creek flows through Dana Point, but the watershed flow to the ocean passes through the Santa Ana River, which is nearly 100 miles in length, making it the longest river in Southern California.

The first European to set foot in this area was Juan Gaspar de Portola. He and his expedition party landed nearby in 1789 and named the river after the Santa Ana Mountains, which were named after Saint Anne’s Day, for the grandmother of Jesus Christ. The name was originally spelled Santa Anna.

In March 1938 a flood, resulting from five concurrent days of rain, occurred leaving more than 50 dead. Some 68,000 acres were flooded and an estimated 2,000 people were left homeless in the Los Angeles basin. Reports on this number vary. In north Orange County more than eight inches of rain fell in one day leaving a path of destruction from Yorba Linda to Fountain Valley.

The flood was classified as a 50-year flood, meaning the expectation of a flood this size would only occur once every 50 years.

Farm animals were carried downstream before finding themselves at the shoreline. Railroad lines were uprooted. Traffic to San Diego was cut off when a Highway 101 bridge over the Santa Ana River was swept away. Families were evacuated and communications were crippled. To make matters worse, hysterical radio broadcasters sent out images of death and destruction with screaming voices when in fact they themselves were looking at nothing. Severe looting was reported in Anaheim, which prompted auxiliary guards to be deployed and some 60 National Guard troops to assist.

By March 11, traffic from Newport Beach to San Diego, by way of Dana Point, was resumed when an emergency bridge across San Juan Creek was constructed. The walled adobe entrance to Doheny State Beach was severely damaged, having been completed in 1935 by the Works Progress Administration as part of President Franklin D. Roosevelt’s New Deal.

The devastation left plenty of room for thoughts on how to control Mother Nature. Within a week, Laguna Beach was holding classes in first aid and emergency preparedness and communities were asking for federal grants for storm and flood damage rehabilitation.

This epic event caused the government to initiate a $1.3 billion effort to tame the Santa Ana River. By doing so, it would remove thousands of homes and business from the “100-year flood” zone saving millions in insurance premiums.

One answer to the problem was to build the Prado Dam near Chino in Riverside County. The dam was authorized in 1936 but the flood of ’38 proved its necessity. Another three dams would be built in the Los Angeles area following the flood of 1938.

San Juan Creek is a part of this watershed. Beginning southwest of Lake Elsinore, there are about 19 tributaries that flow into it, including Trabuco Creek that follows along Ortega Highway. As it reaches flat land, seepage into the ground provides an underground aquifer. This underground reservoir became the water source for Sidney H. Woodruff’s Dana Point development in the 1920s and was the beginning of the Dana Point Water Company, with its landmark storage tank at Stonehill Drive and Golden Lantern.

With the knowledge of San Juan Creek as a major part of the water flow to the ocean, the U.S. Geological Survey installed water gauges to measure the water flow, and therefore the water height, during two periods. They were recorded from 1929 to 1969 and from 1970 to 1984. The highest peak was measured at 5.6 feet during the 1969 flood, and the second was during the 1938 flood.

Orange County has made a concerted effort to save this water since 1968 when it was reported that 3.259 million gallons of water pour down the creek every year and is lost to the sea.

Carlos N. Olvera is Vice Chair of the OC Historical Commission and is a Dana Point Councilman.

Pet of the Week: Grayce