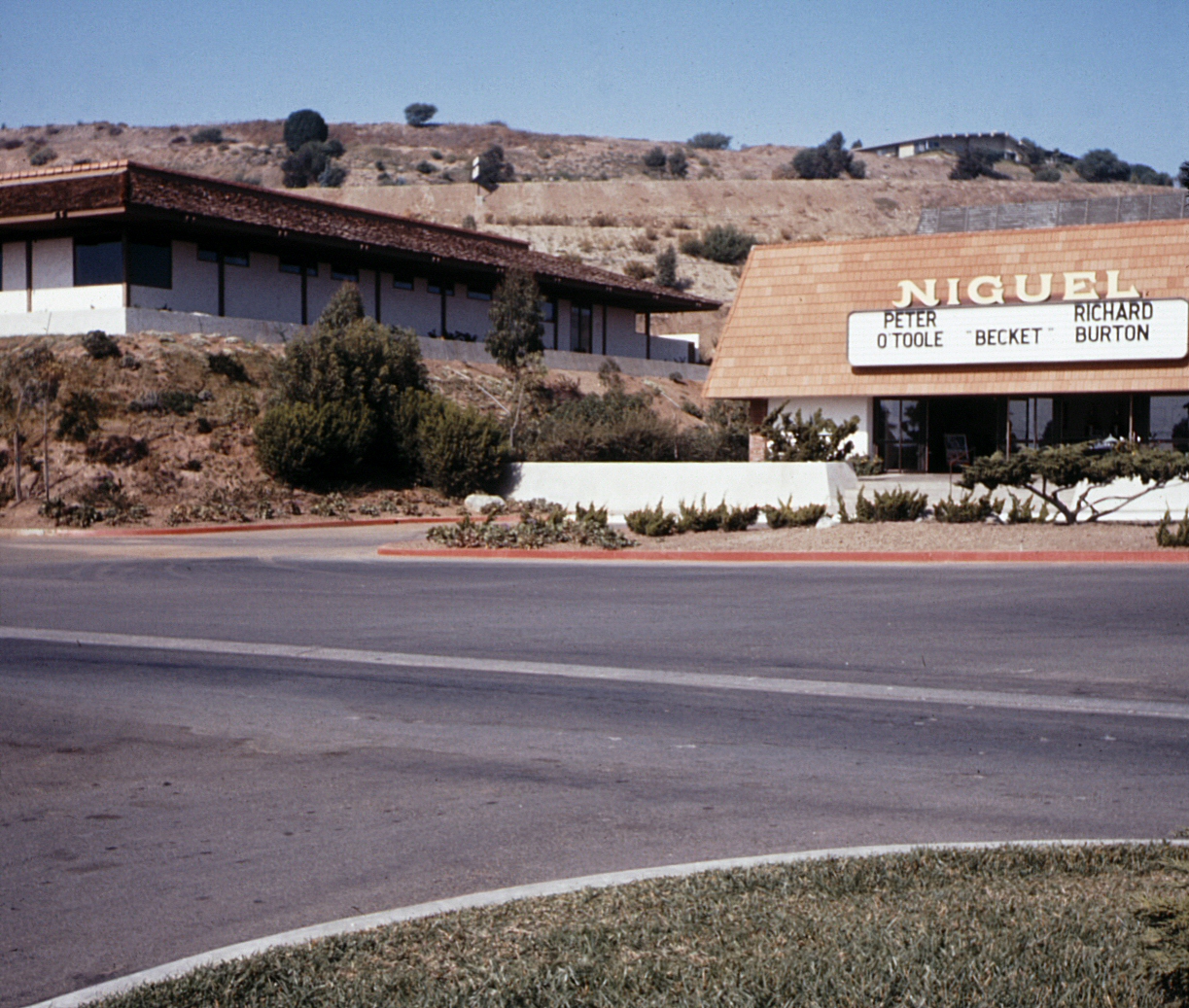 Monarch Bay Plaza, at Crown Valley Parkway and Pacific Coast Highway, was set out to be the first shopping center in the area. Originally a part of the 1842 Rancho Niguel 13,000-acre land grant spreading from Laguna Canyon to San Juan Creek, the area was named after a local Indian village called Niguili near Aliso Creek. Given to Juan Avila, it was sold to Don Juan Forster in 1865, then to Marco Forster, and then to Lewis Moulton and Jean Pierre Daguerre in 1895. Subsequently the Laguna Niguel Corporation bought the land for commercial development in about 1960.

The plaza construction started in October 1963 after the initial opening of the 7.5-mile Crown Valley Parkway in September from the Interstate 5 freeway (then the Santa Ana freeway). It was to contain a gas station, a Safeway grocery store, a medical building, an office building and the Niguel Theater.

The theater was to be the second location for South Coast Theaters, the first at South Coast. Built with a Spanish heritage design, it had one screen with 478 seats in a 6,000-square-foot building. The “luxury theater” opened in 1965.

The theater was also used as an auditorium or lecture hall for community forums. In 1974, a lecture series by the Assistance League of Laguna Beach was held there. It featured speakers such as Dan Rather, Peter Lind Hayes, Steve Allen, Dr. S.I. Hayakawa, Edgar Bergan and White House correspondent Helen Thomas. St. Edward’s Catholic Church also used the facility in the ’60s after they out grew their original church in Capo.

It was originally owned by the James Cagney family, and sold to Pacific Theaters in the late 1970s. It was built at the bottom of a hillside. During heavy rains the cascading water down the hill pooled behind the theater causing flooding to at least the first five rows. The fire department was called in to do water vacs. This forced the closure in the early ’80s and subsequent razing. The current building, where Starbucks is now located, was completed in 2003.  But the water issue was not abated. Drainage catch basins have been built and the current building is located farther from the hillside, but sandbags are still needed today.

Recently, a picture of the theater I posted on Brian Parks’ Facebook page, “You know you are from old school Dana Point if you remember …,” brought over 350 likes and 120 comments. Here is a small sampling of the memories the image kindled.

Seeing the 1978 surfing movie Big Wednesday seemed to be the favorite. Tom A. wrote about seeing the movie there and meeting one of the stars Jan-Michael Vincent. Howard H. recalled how the concession prices were jacked up for the “free” movie night.

Several recall working at the theater wearing their red vests, like Marianne and Nancy who watched Dr. Zhivago in shifts while on duty. Nancy had Oklahoma! memorized after watching it 30 times, she wrote. Mal S. was an assistant manager there when John Wayne walked in the door. Julie K., who was 16 at the time, remembered making $2.35 an hour and Colleen H. confessed to letting friends in for free.

Then there is Mike F., who finally got to second base in the dark auditorium in the flickering light of the silver screen.

Matt remembers his babysitter taking him there while he worked and seeing The Pink Panther three times. Sneaking in underage and not being caught seemed to be common memory, except for Alison D. who did get caught and had to call her mom for a ride back home.

Plenty of shenanigans went on there too, such as that of Jimmy M., who tossed a soggy Milk Dud at the screen and watched it leave a thin brown stripe as it slid down the screen—a bit of mischief that later turned into a fad. Remember Dollar Night on Wednesdays? That night was big on surf movies and prompted several young moviegoers to skateboard down the aisles. Endless Summer anyone?

Linda M. was with a group of kids when one got a little to rambunctious and was kicked out. As a show of solidarity the whole group got up and left.  So there! John A. wonders if anyone sneaked in the back. David C. worked there and said the popcorn was good but hold the butter. He admits to being in the audience at one of the last movies shown there, Butterfly with Pia Zadora, and slinking down low in his chair hoping to not be recognized as underage for an R-rated movie.

John A. wrote of memories of the musty smell the flooding would leave.

Them were the days.

Carlos N. Olvera is chairman of the OC Historical Commission, and a Dana Point city councilman.