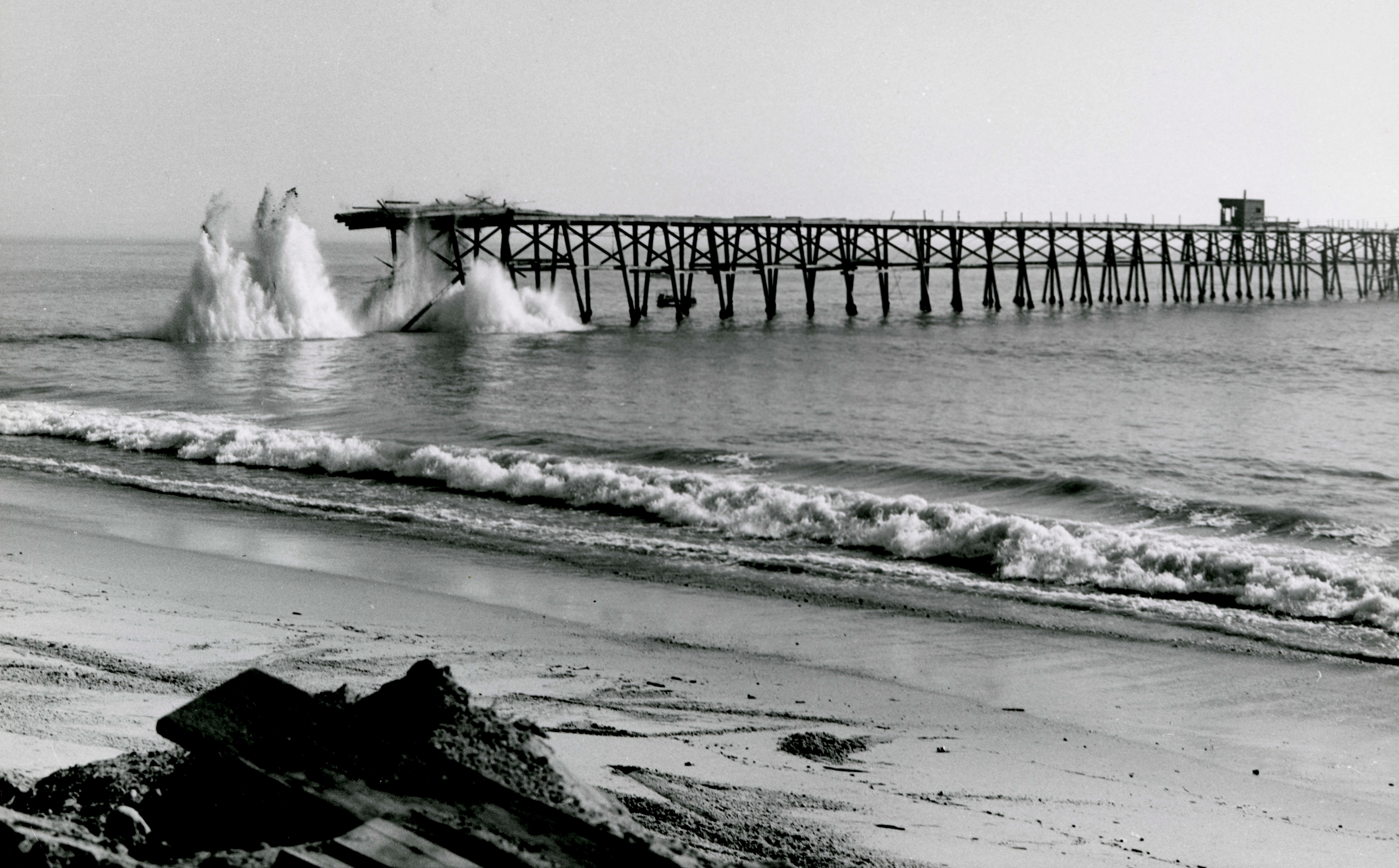 The Capistrano Beach Pier, once an important landmark celebrated as one of Southern California’s prime fishing destinations, came to an end just a few years short of its 40th anniversary after making headlines for a couple of tragic events that happened nearby and then falling into disrepair.

The development of Capistrano Beach began in 1925, with the tag line “Birth of a City,” by J.A. Waldy and was later known as the Capistrano Beach Co. After the Frank Meline Company announced the official opening in January 1928 for the residential tract on the bluff and five miles of ocean frontage, including the Capistrano Beach Club, the announcement that a pier would be built, at a cost of $50,000, came in March 1929. Petroleum Securities, owned by the Doheny Family, bought the investment in January 1929.

The pier was to be of wood, 1,180 feet long and 20 feet wide and built for strolling, sightseeing and fishing. The developers for the pier were the Wailes-Smith Co. The pier had a T-shaped head, 80 feet by 60 feet, and included a boat landing gangway with a floating dock for small boats and yachts.

From 1949 to 1951 fish reports credited fishing operations based at the pier with bringing in 18,000 pounds of fish, mostly abalone, annually. By the early 1950s the pier was claiming fishing records in Southern California. Seasonal fishing boats were leaving daily, with limits of log barracuda ranging from 10 to 13 pounds being reported.

In 1955 the Orange County Coast Association announced several beach improvement proposals. The Capistrano Beach Pier was one where the acquisition and development of a recreation beach was being considered to be added to Doheny State Park.

July 1959 brought reports of a plane which “slammed” in to the water about 200 yards off the pier. It was a Cessna 160 with three people onboard. The pilot was a 27-year-old man from Lynwood who had taken off from the Hawthorne airport. Over a two-week period, debris and body parts were either recovered from the water or washed up on the shore. Tragedy struck again in June 1963 when a fisherman headed for the pier was hit by a train at the railroad crossing.

The final tragedy for the pier itself came in 1965. In September a huge block A-frame structure was placed over the 37-year-old pier to begin its removal. By November, a four-man team of underwater demolition experts began blowing up 30- to 60-foot sections of the structure. The actual destruction began the year prior when waves overcame the pier footing at the beachhead, causing severe damage. The pier was condemned and closed to fishing as plans were developed for its destruction. The owners, Cherry-Hadley Corp., maintained a lease from the state for it uses but they determined it was too expensive to repair. Prior to the explosive charges being detonated, the workers carefully removed the pigeon flocks that had nested there amongst the pilings, using empty explosive boxes to carry the birds away.

The explosive charges placed below the water line brought many spectators to watch the towering water spouts and the huge roars as pieces of the pier came down and the broken pieces were dragged ashore by hydraulic units within the A-frame. According to eyewitness reports, as the explosions moved out farther into deeper water, all you could see of the blasts were the bubbles on the water’s surface.

Carlos N. Olvera is chairman of the OC Historical Commission and mayor of Dana Point.

On Life and Love After 50: Dilemma for Widows and Widowers