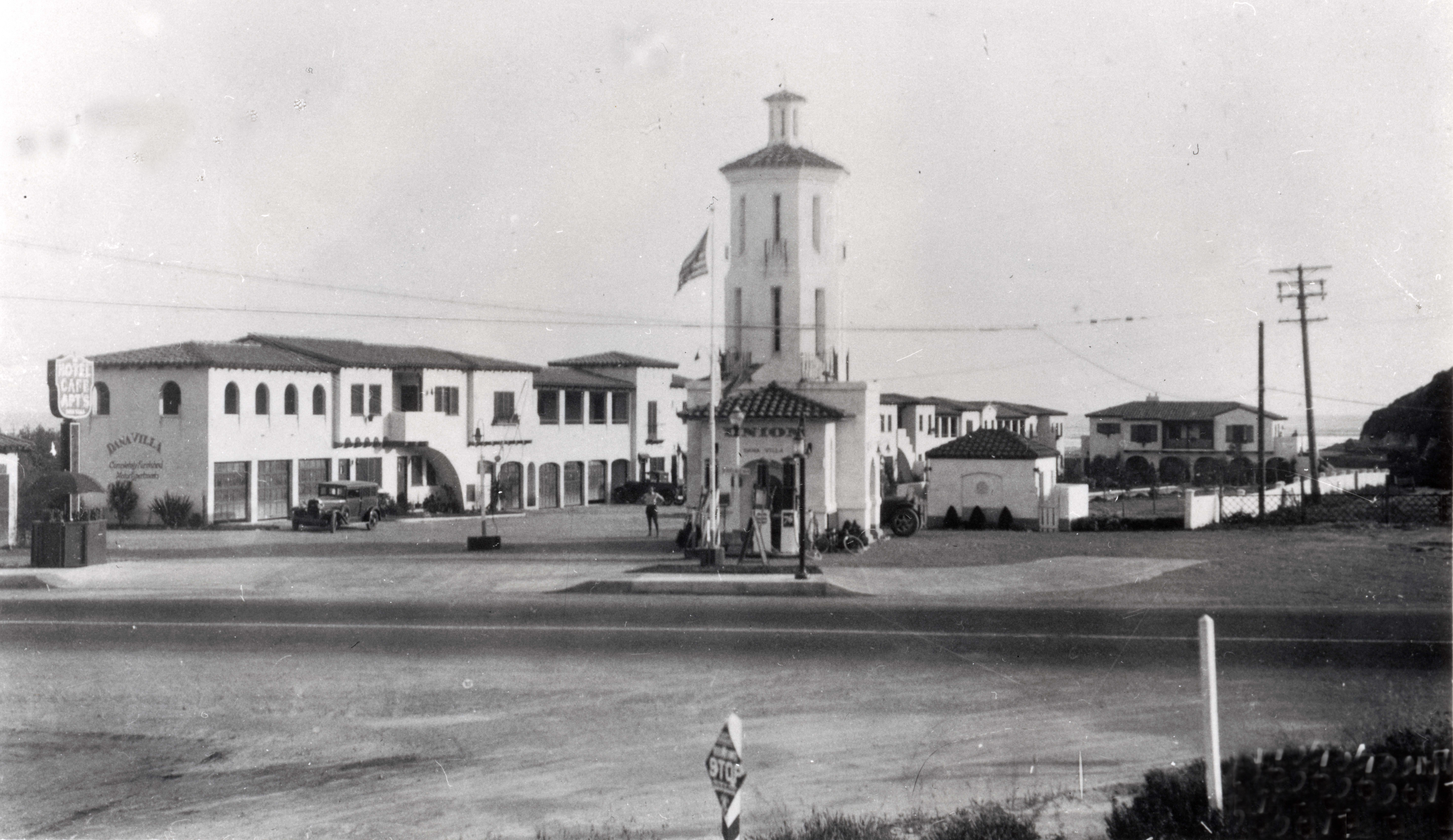 It’s History: A Proud Past for a Now-vacant Corner Lot

Dana Villa Motel. The name alone conjures up memories for many residents. Today, all that remains is a vacant lot at the corner of Pacific Coast Highway and Dana Point Harbor Drive, which serves as a point of sale for pumpkins, strawberries and Christmas trees. But the lot has a proud past.

Originally known as Dana Villa by the Sea, the location housed a two-story motel with apartments, garages and kitchens, and was billed as a “Motor Inn Deluxe.” It fronted what was then called Roosevelt Highway, with a side road that was a dead end path going toward the Pacific Ocean.

During the Sidney H. Woodruff era of 1929, the Los Angeles area developer advertised a lot for sale to build a motel, a “Business opportunity at Dana Point—Motor Inn Site.” It qualified the sale “under architectural restriction with an abundance of water, electricity, telephones, sewers and other public utilities. Just call G.R. Hannan, Fitzroy 2141.”

An offer was made and a landmark was built. W. D. Moore, with his family and son-in-law, Ralph W. Quackenbush, moved to Dana Point from Kansas and construction began in 1929. Billed as a perfect quiet “sneak-away,” rates for the new stop began at $2.50 a night. The motel advertised golf, fishing, hiking, horseback riding and swimming.

The ads even captured the additional tag of “By-the-Sea” from an earlier development in 1888, and the motel was listed as the most “up-to-the-minute-motel.”

The Dana Villa’s convenient location on the highway also made it a convenient stop for a robbery in 1934. Soon a gas station was added and a restaurant. By the late 1930s it was referred to as being in Historic Dana Point and the American Riviera comparable to the Mediterranean. With the opening of the new Ortega State Highway in 1940, it opened up the “back country” of Lake Elsinore and the San Bernardino Mountains to the coast.

Ralph Quackenbush became a very important figure in developing Dana Point. In the 1950s he was referred to as “mayor” due to his public involvement leading the Dana Point Civic Association, which continues today. He was instrumental in getting the Chandler Group, the majority land owner in Woodruff’s failed development, to donate a lot for the Community House on San Juan Avenue, to be used as a facility for the whole community. It was here that meetings began for the incorporation of the city of Dana Point. Later, in 1959, Ralph was appointed to the Coastal Municipal Water District. He was also instrumental in establishing the first bank, Security Pacific National Bank, at the corner of La Plaza and Golden Lantern, which still stands. Mr. Quackenbush died in December 1960.

By 1956, the motel was bought by the Folgner family of San Juan Capistrano for $250,000. Later, upstream of the motel, the Southeast Regional Reclamation Authority’s Treatment plant was built. Due to heavy rains in February 1980, nine million gallons of untreated sewage flowed down San Juan Creek. Gary Folgner found himself pumping one million gallons a day for three days from the door of the Villa. And if that was not enough, in June of that year, a fire broke out, routing 100 guests and gutting the restaurant, a few adjacent motel rooms and causing $400,000 in damage.

In 1991, the Folgners applied to the new city of Dana Point to demolish the motel and build a four-story, 148-room hotel, complete with a restaurant, pool and spa. The approved design replaced a previous plan to erect a 10-story building overlooking Doheny State Beach. After approval, financing was not obtained and the structure was never built. A subsequent developer in the early 2000s loved the historic vista and wanted to restore the old building. After obtaining permits and during a sagging economy, he got as far as stripping the walls finding so much termite and dry rot damage, it was razed. In-N-Out anyone?