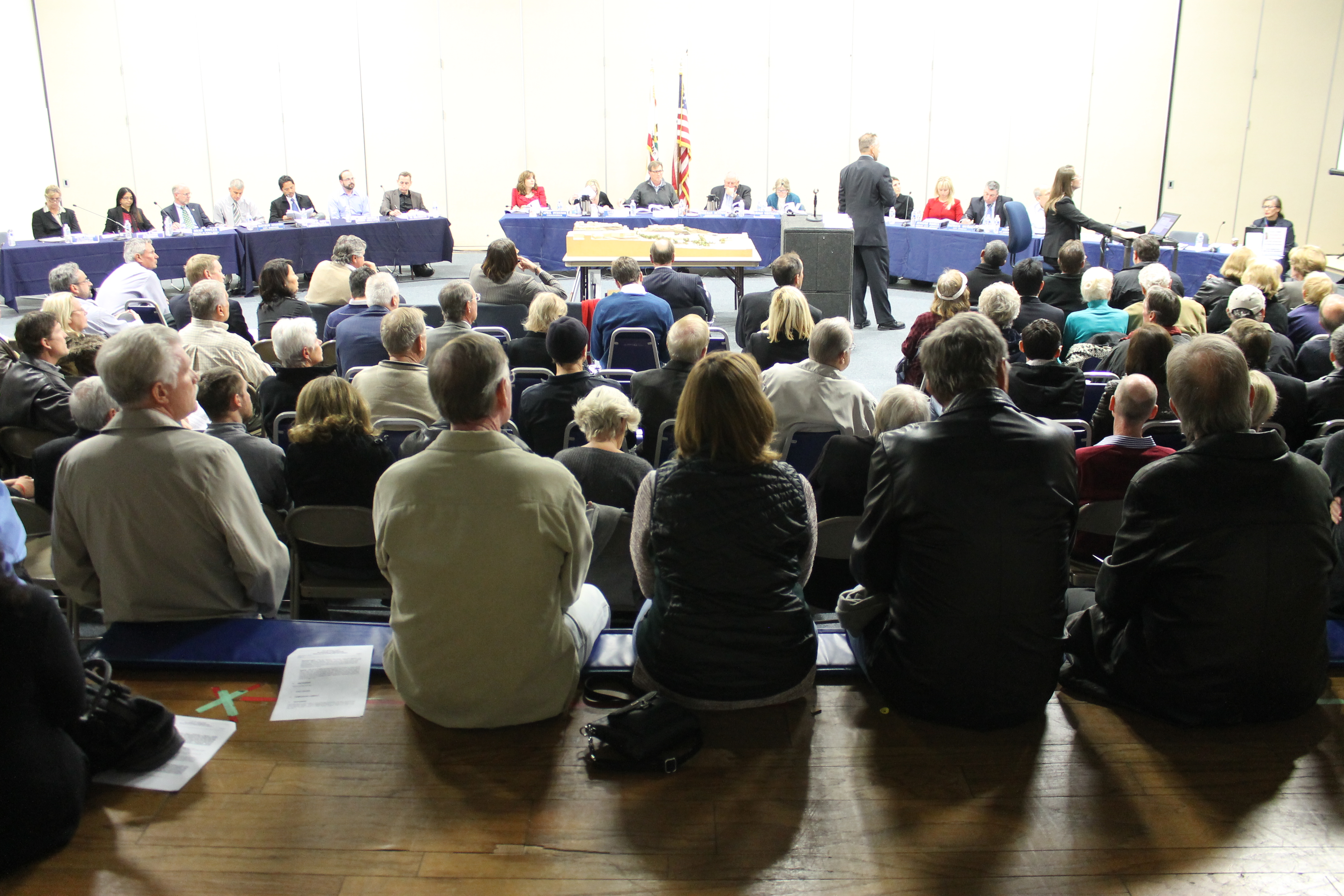 One of Dana Point’s biggest conversations from the latter half of 2013, the Doheny Hotel, must wait until next year for its fate to be decided.

The decision came after the hotel’s developer, Beverly Hills Hospitality Group, presented an adapted proposal—for the first time—to the five-member commission and more than 100 people packed into the Dana Point Community Center gym with hopes of addressing parking, traffic, density and commercial delivery questions raised at the body’s November 18 meeting.

“We feel that we have really listened to the community and Planning Commission through our meetings,” Coralee Newman, the developer’s communications consultant, said at the meeting. “We have taken in your input and modified the plan.”

Bob Keeler, an architect with the hotel’s designer Langdon Wilson International, presented modified plans, which include developing a portion of Lantern Bay Park to extend the hotel’s driveway, stepping the building back 30 feet from PCH and parking solutions. It was the first time staff, commissioners and residents heard the plan, although a version was presented as an alternative in an Environmental Impact Report released this summer.

Currently, the site houses a Jack in the Box, vacant store and 46-room hotel structure, previously operated as the Dana Point Harbor Inn. All buildings would be demolished. Plans for the hotel include conference rooms, restaurants, rooftop lounge amenities and an underground parking structure with 275 spaces.

If approved by the commission, new plans would see the developer seek City Council approval for a 30-foot easement onto parkland. The land was given to the city by Orange County, with a deed restriction attached that it only be used as a park.

The developer is proposing utilizing a northern hillside of Lantern Bay Park, near the parking lot and recreational courts, to serve as a front driveway, easing hotel access. The city could make a case that parking access could meet county set terms, City Attorney Patrick Munoz said, adding the city would seek something in writing if the project gains commission and council approval.

Thus far, there have been no negotiations or discussions with the city over a possible land encroachment, said Ursula Luna-Reynosa, director of community development.

“Until they (Beverly Hills Hospitality Group) have approval, it would be an exercise in futility,” Luna-Reynosa said.

The proposed driveway extension would provide an entrance to a subterranean parking structure, house taxis and shuttles, and act as a second commercial loading zone. Previous plans only accounted for a 10-by-100-foot loading zone on Pacific Coast Highway, which commissioners and residents alike expressed concern about, at previous meetings.

Another item residents have taken issue with is a height variance request to build up to 60.5 feet—well above the city’s 35-foot restriction. Presented alterations slightly reduce the building’s height, but the developer still seeks to push up the city’s limit, for a five-story structure.

While the developer presented alternatives as a responsive measure, speakers debated just how responsive their new proposal was, asking the commission not to create a precedent throughout town, in granting a height variance.

“The location doesn’t bother me. What troubles me greatly is the Doheny Hotel variance with zoning code for height,” said resident Susan Hinman. “This significant exception grants special privilege to the applicant … and will set a precedent for surrounding properties.”

A precedent is something staff has said, in the past, will not be set as each development proposal is evaluated individually, and site topography is taken into account. The developer has held its proposed height would not block coastal views, due to the land on which the hotel could sit.

Several residents echoed Hinman’s fears, including Chris Mitchell, owner of Crown Acquisitions in Dana Point. Mitchell, whose company is rehabbing a building on the northwest corner of PCH and Crystal Lantern for its headquarters, challenged the developer saying the building would “annihilate” any view his company has. In redoing the structure, Mitchell said he specifically opted out of upgrades that would have required a 6-inch city height variance. He said the proposed hotel just doesn’t fit.

“It’s like trying to cram me into a size 29 jean, when I am really a 36,” he said. The audience broke out into applause and had to be quieted by commission Chairman Gary Newkirk several times throughout the public comment period.

Of the two residents speaking in favor of the project, Harold Kaufman offered commissioners a piece of advice. Kaufman served on the city’s first Planning Commission after city incorporation in 1989 and said he too had heard similar complaints when the St. Regis Monarch Beach Resort was being considered.

Commissioners, absent Norm Denton—who recused himself because his homeowners association owns land within 500 feet of the proposed hotel—left the public comment period open and continued the discussion until its February 10 meeting. At that time, staff should have more information on the developer’s intentions, Luna-Reynosa said.