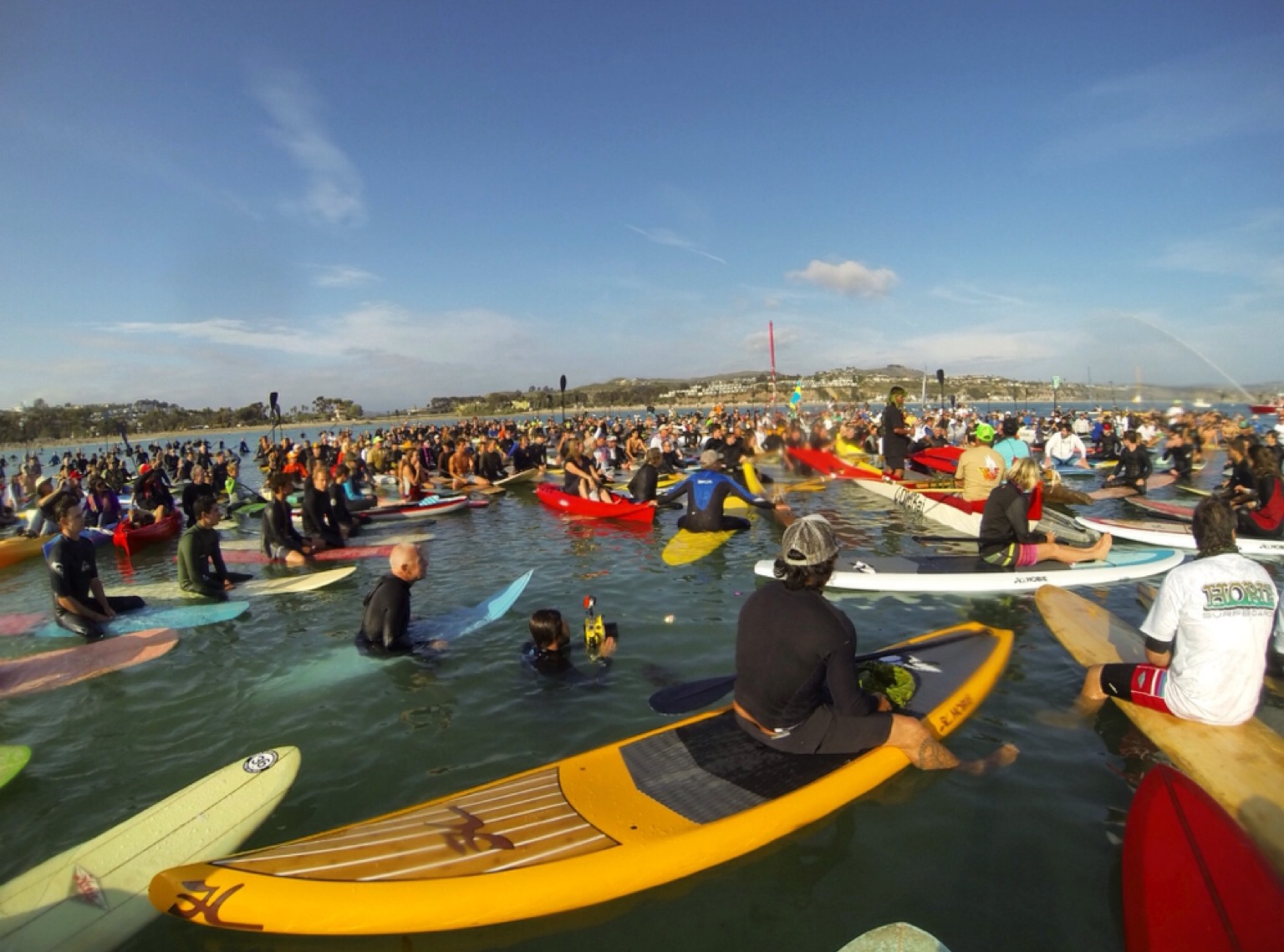 “Have a Hobie Day” is more than just the catchphrase of the proprietor of Southern California’s first surf shop, pioneer of the modern surfboard and Hobie Cat sailboat inventor. It was, and is, a motto—a way of life, shaped and revolutionized by Hobart “Hobie” Alter.

For the hundreds who assembled at Doheny State Beach Friday, April 18 to honor the life of Hobie, the gathering epitomized a Hobie day.

Alter died, surrounded by family, at his home in Palm Desert on March 29. He was 80.

Fulfilling his request for a traditional Hawaiian paddle-out memorial after his death, family, friends and devotees paid their respects to the man and his gifts to surfing and sailing culture.

Paddling prone on surfboards, stand-up paddling, kayaking, paddling outriggers, piloting Hobie Cats and other boats, or watching from the sand, an estimated 1,000 people congregated to honor and share their memories of Hobie Alter.

The event succeeded as a celebration of life, and of the fun brought to life by Hobie Alter.

Alter’s transformation of the surfing and sailing industries and culture began in 1950 when he started shaping balsa wood boards in his family’s garage in Laguna Beach. By 1954 his father, annoyed with the dusty mess, helped Hobie open a shop on Pacific Coast Highway in Dana Point. It would become Southern California’s first storefront dedicted to the rising sport.

It was there that, working with friend and co-worker Gordon “Grubby” Clark, Hobie began the modern surfboard’s transition from wood to polyurethane foam and fiberglass.

In 1967, Hobie’s love of sailing prompted him to apply his foam and fiberglass recipe toward the creation of a lighter and more affordable sailboat—one that could be launched from the beach and piloted by a single sailor—the Hobie Cat.

Hobie always found a way to take a fun activity and make it better, including forays into skateboards, the Float Cat floating seat for fly fishing and the Hobie Hawk remote controlled glider, to name a few. While his many design innovations to existing recreational equipment effectively upped the fun factor, he brought the masses along for the ride. Whether people joined  Hobie in business ventures or just enjoyed the playthings he made, the memories of Hobie and his creations reached far and wide.

Following the water ceremony, and back on land, the crowd lingered to share stories and reminisce about the man who was a loved one, friend, mentor and pioneer of fun.

The send-off included a standing row of foam surfboard blanks where people pinned photos and notes to Hobie as a visual remembrance and show of gratitude.

People of all ages and varying levels of connection with the iconic innovator expressed their thoughts on paper adding to the moving display. Ten-year-old Jack Culp of San Juan Capistrano was among those who felt moved to pen a note to Hobie.

“I feel honored to be here. He has made such a difference in the surf industry and everything water related. I came here because I really wanted to honor him for that,” Culp said. “Hobie was my friend’s great uncle. I think he was really lucky to have had him in his family.”

As people mingled, admiring the large assemblage of classic Hobie surfboards, Hobie Cats and classic cars bearing the iconic brand name, many took a turn on stage, behind the mic to talk story and share fond remembrances of time spent with Alter.

Sheri Crummer, a surf photographer and surfer from San Clemente, also shared a story, then summed up the session with heartfelt appreciation.

“I would like to thank Hobie for all the joy and all the stoke he gave everyone over the years,” Crummer said.

The indelible legacy Hobie leaves in death—ingrained by his more than six decades of ingenuity and invention—will certainly live on.