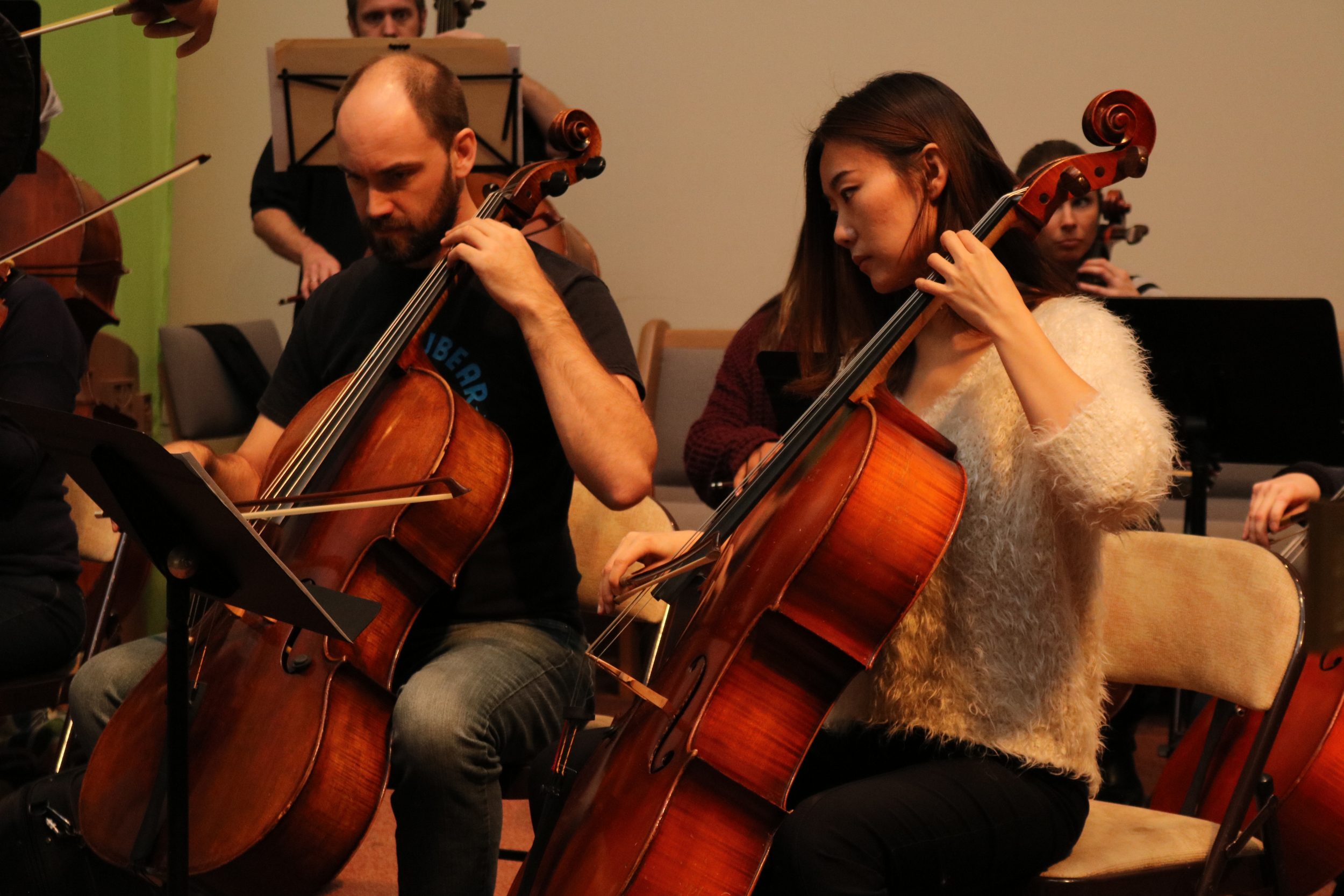 The orchestra is a beehive. The sound of tuning to one note, with bows and strings of various lengths moved by arms and fingers of various lengths, is the multi-octave, woozy buzz of bees flying to the hive from various directions, in various states of shape, cargo and fitness. As such, the musicians, flown (or driven) in from around Southern California, are the bees; the quarter-dome of the church rehearsal space is a diorama of the hive; the conductor, a 30-something man—Dean Anderson—the queen in a blue pullover and chinos, or the beekeeper, or maybe he represents something instinctual in the bee that makes it fastidious; the violins and violas and double bass are the pollen; and at last, the first sweeping larks of Tchaikovsky’s Variations on a Rococo Theme are the honey, sweet and local.

Or not. But then how would you describe the Dana Point Symphony Orchestra? Anderson, also the Artistic Director, likens his role not to a beekeeper, but to a chef.

“It’s like setting up a meal,” he said. “You want to have balance in taste; not too sweet, not too salty, a little protein. … (If we decide) this piece is kind of heavy, we want to have something light.”

There’s a tendency to try to understand classical music from the outside, and thus a tendency to dismiss it from the outside. Doing so, of course, is arbitrary and lazy, akin to saying you don’t like rock music, or soup, or cities that end in the letter “e” (go ahead, try to find a person who can resist both the rugged landscape and sophisticated art of Santa Fe and Seattle’s culinary and natural charms).

But submitting, at least, to the fruits of the “standard orchestral repertoire,” as Anderson put it, is easy. It’s easier when you start at a practice—like the one Anderson held with the strings section on Monday; the first gathering since last year of any of the Symphony’s members ahead of their first concert on Saturday, Feb. 4.

Anderson, perched on a high composer’s chair, called out measures at which the orchestra would start to play. Without the woodwinds, brass or percussion, and without the cello soloist pegged for the first performance, Anderson hummed the aggregated melody of the parts unrepresented. He often stopped and ordered the orchestra to repeat a measure or two. He called for the second violinists to play challenging passage alone, in order to correct an incongruence. Unpolished still in this the first 20 minutes of the Symphony season, and without the equalizing quality the rest of the band brings, the brain can understand the parts that make the piece. A passage of plucked strings sounds eerie like this, and then a cascade of pops across the stage, like scanning a rasterized photo, displays the physical phenomenon of seeing a symphony live.

Stripped so far down, it’s easy to appreciate the violins as a sweating onion, before it marries a strip steak, or as an offensive lineman who recognizes a blitzing linebacker and gets just enough on the intruder to allow the quarterback to throw a touchdown. More than anything, though, it’s like seeing inside the multi-layered mind of the composer, who must hear a dozen things in one piece.

This process, of coming to understand the music for what it is, up close with a local group of musicians, is at the core of the Symphony’s appeal, Anderson said.

“I always like to say that I want the audience to have raw contact with the music and just decide for themselves how they react to it naturally before telling them how to react to it,” he said. “Then afterwards if there’s something that intrigues them, we can help them with that.”

Anderson said at concerts this year he will introduce each piece with a “few things about what the audience is going to hear.” There will also be lectures ahead of concerts for those who want to get context for the music that is going to be performed.

It’s not the only change in the Symphony’s sixth year. There’s a new executive director—Amisha Patankar, social media director for the L.A. Opera—and as the newly appointed artistic director, Anderson has changes in store for the Symphony’s catalog.

“Everything in our program we’ve not done before,” Anderson said. “I feel like now we can move forward with trying new things. This is not about what I like; this is about what I think the community will appreciate the most.

“We want to pick music that engages them and challenges them, but not too much; you don’t want to leave a concert feeling tired, you want to feel refreshed.”

The new program includes a trumpet soloist and a saxophone concerto; it features an all-Russian program and a concert of only works from the Austrian composer Joseph Haydn.

For the musicians, there appears to be collective relief at the group’s reunion and an opportunity to get lost again in music. In introducing the changes coming this year, Anderson found himself devolving into now-tired political rhetoric and, noticing this, capped it at, “Let’s make the symphony great again,” which won a particularly knowing and relieving laugh from the orchestra. Nathan Atwater, a double bassist from Pico Rivera, said, “Oh man, I’m just happy to be playing music especially with all the mess going on.”

Patankar agreed that the role of the Symphony, and art in general, in today’s world is critical.

“Art can provide when things are rough,” she said. “When we’re in a situation like we’re in now, it can bring people together to cultivate a sense of appreciation for something beautiful like classical music.”

The Dana Point Symphony, all things considered, is in a position to effect that change: it’s a good symphony, geographically well-suited and performs for an appreciative audience.

“The audiences love it, they keep coming back,” said violinist Weneta Kosmala. “I think the combo is fantastic because you have a very high level quality of music, much higher than you would imagine playing in a church, and the ability of the folks to be so close to us while we play.”

Anderson said what makes the Symphony unique is that musicians—a mix of professional instrumentalists and part-time players—and audience members often spend time after concerts talking with one another. And since the second season, he said, the 1,000-plus capacity venue at St. Edward has been packed for every show.

Members of the Symphony are also focused on ensuring classical music reaches the next generation.

“I have young children, and it’s so nice for them to be able to be exposed to classical music,” Kosmala said. “It doesn’t need to be exclusive, but I think we’re losing it, and I think it’s important to maintain it.”

“There’s been such a dearth of classical culture in recent years,” said violinist Brenda Crawford, “but I’m so encouraged by the young people coming into these symphonies, so I think there’s a resurgence.”

Patankar said the key to attracting younger audiences is making sure that, first, people from the region know that Dana Point has a symphony, and second, freshening up the programs to include a variety of music that appeals to varied groups of people.

The spring season for the Symphony is just that—varied and fresh—and there’s talks that it will expand into a summer pops series and then a fall series.

Too, the goal is to expand the size and resources of the Symphony so that it can pay market rate for top musicians and offer the quality and regularity of music that the nearest symphonies (in Costa Mesa and San Diego) do.

The members of the Symphony have largely remained the same since its inception, with a few additions every year. And their chemistry is evident, because by the end of their first practice, the hitches are minimal, and the parts unplayed by instruments not present hang in pregnant silence. In their stead, amongst the musicians, there is eagerness and energy—there is a buzz.

All shows at 7:30 p.m. at St. Edward the Confessor Catholic Church, located at 33926 Calle La Primavera, Dana Point. Tickets are $60 for the season, or $20 for each show, and $15 for students, seniors and military members. They are available at www.danapointsymphony.com

“Dance of the Hours” from La Gioconda by Amilcare Ponchielli; Rococo Variations (with Nathan Le on cello) by P. Tchaikovsky; Symphony No. 2 in D Major, Op. 74 by J. Brahms

March 25: “The Father of the Symphony – ALL Haydn”

Overture in D; Trumpet Concerto (with John Aranda on trumpet); Symphony No. 94 in G Major “Surprise”

Oberon Overture by Carl Maria von Weber; Concerto for Saxophone by Aleksandr Glazunov (with Russell Veirs on saxophone); Symphony No. 8 in G Major by Antonin Dvorak

“Nocturne” from String Quartet No. 2 in D Major by Alexander Borodin; Concerto for Violin, Op. 82. by Aleksandr Glazunov (with Myroslava Khomik on violin); Symphony No. 5 in E minor by P. Tchaikovsky