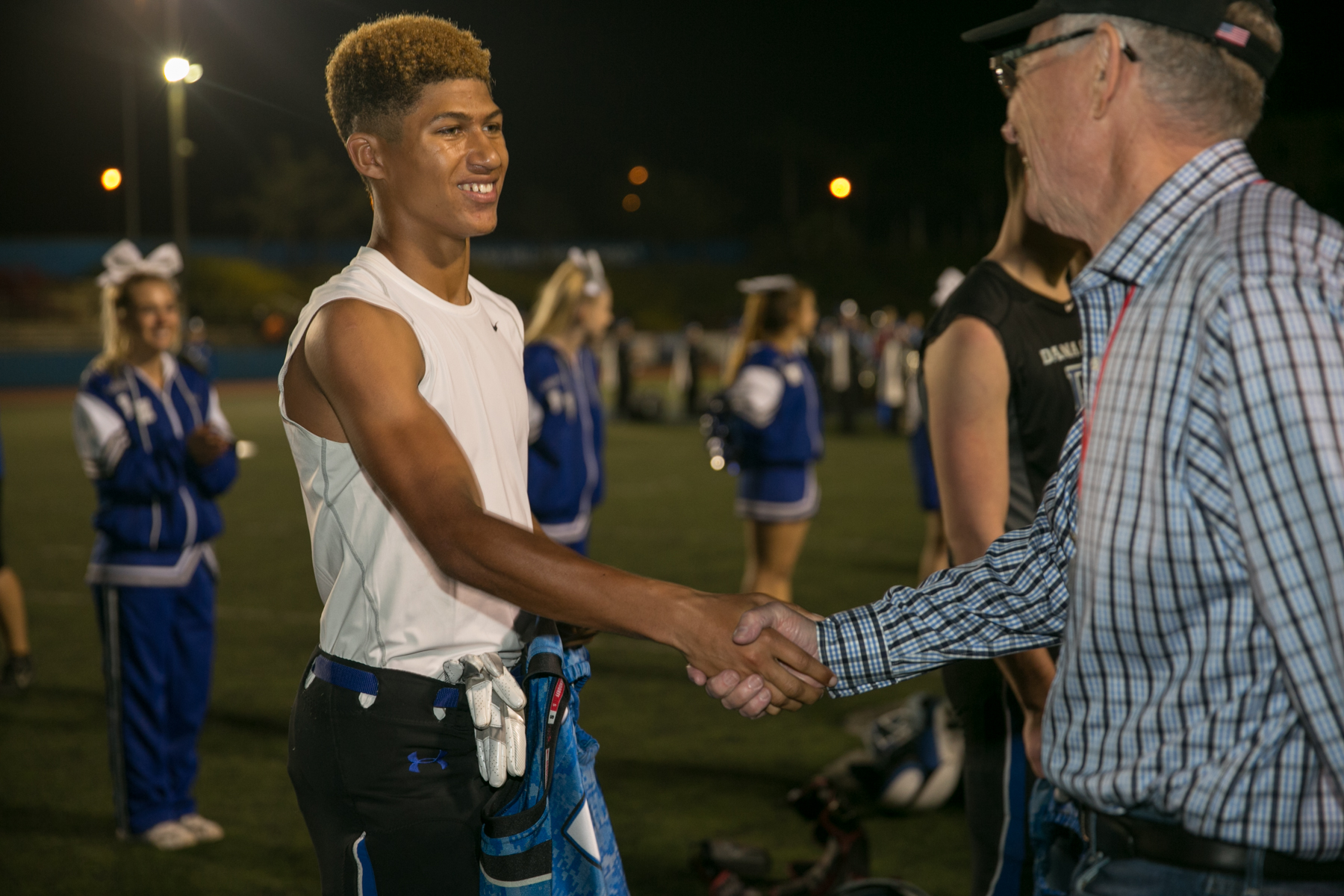 Several Dana Hills football players closed their eyes for a moment, envisioning the picture being painted by retired Army Capt. Frank Legare, a slim, sharply-dressed grey-haired man speaking to them from a chair on the empty stage of the school’s Porthole Theater.

Legare spoke in a soft tone, but with such detail that the stories he told transported the Dolphin players through space and time to the jungles of Vietnam.

During one of his two tours of duty in the former warzone, Legare said, his unit was charged with moving through a dense bamboo forest. Their mission was to push the enemy, located on the other side of the forest, backwards, into a strategic position where the Americans would have them surrounded.

The day before the mission, the bamboo forest had been bombed, sending a countless number of dust particles into the air which never settled, making the jungle seem more dense and more difficult to see through. The threat of getting separated from the rest of the group was a very real, and dangerous, possibility.

“The forest was dirty and filthy,” Legare told the players.

What eventually got Legare and his unit safely to the other side of the forest, he said, was the very reason he was there on Tuesday night speaking to the football program.

“We needed to be together as a unit when we came out on the other side of that forest,” Legare, a San Clemente resident, said as he finished his story.

It was teamwork and unity that won out that day in Vietnam, he explained. That was one of the many messages he wanted to preach to the assembled Dolphin players some 50 years later.

The words hit home in the hearts of the Dolphins, who will honor 52 veterans, including Legare, as part of the program’s annual Honor the Valor game on Friday, Oct. 13 at Dana Hills High.

The Dolphins will not be wearing their names on the back of their jerseys when they take the field to play Laguna Hills. Instead, each player has been assigned a military veteran to represent and they will wear that person’s name on their back. The jerseys were donated for the event by the Dana Point 5th Marine Regiment Support Group. Each player will get to meet with their veteran at a pregame dinner and will present their game-worn jersey to them after the game.

“It raises the stakes so much. We’re not playing for just each other. We’re playing for the name on our back so that we can honor the veterans,” senior center and defensive lineman Tommy Bortnick said. “They’ve done so much for us.”

Legare, who played offensive line in high school, was the first in what was a series of guest speakers invited to speak to the Dolphins this week. Veterans spoke to the Dolphins at the end of each practice leading up to the game.

The topics discussed varied, but many of the themes were practical for both life and football.

Legare stressed the importance of being a leader and surrounding oneself with quality people.

Legare, who was stationed at Arlington National Cemetery and was a White House aide to President Lyndon B. Johnson as part of a two-decade-plus career, touched on teamwork being crucial to any endeavor.

“His stories related to us so much,” senior Jayden Smith said. “He told us that everyone has a job, everyone has something they have to do so everyone survives. That really relates to how we have to perform our best (on the field) so we can succeed.”

In the Honor the Valor’s six-year history, over $75,000 has been raised and donated to local military organizations. The game is set to begin at 7 p.m. For more information on the game, visit www.dhfootball.com/htv.