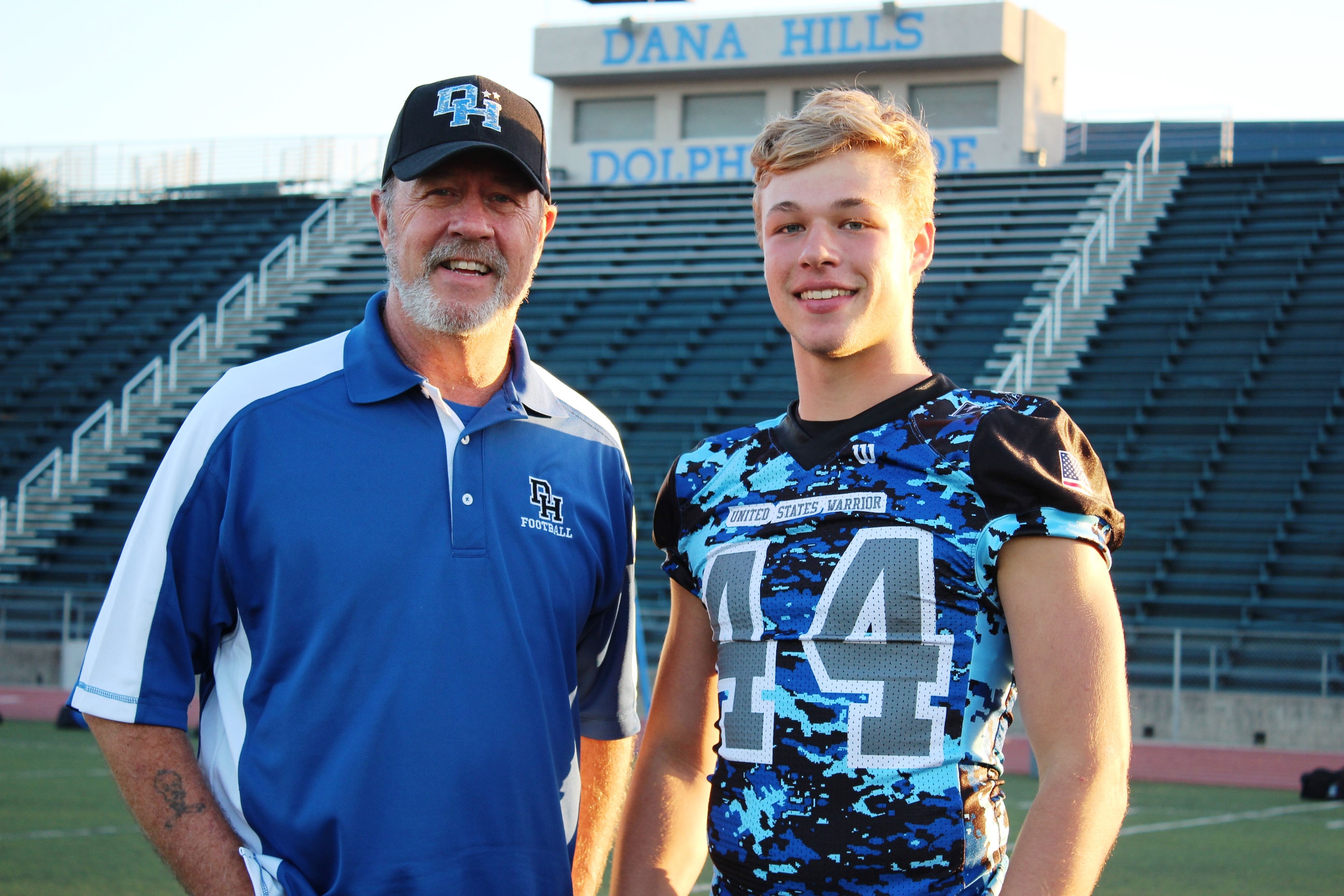 Harry Clew looks down at the young men kneeled before him on the football field. A smile creeps out of the corner of his mouth, his World War II veteran’s hat slanted proudly to the left, shielding his eyes from the setting sun. Clew, 90, is retelling stories that needed to be told.

As a first lieutenant in the Air Force during World War II, Clew was shot down over Regensberg, a city in southeast Germany, during a bombing run. He survived the crash and was taken as a prisoner of war and placed in a POW camp. He was held there for 15 months.

“What was the hardest part of being a POW?” a Dana Hills High School football player asks.

After cupping both hands behind his ears, straining to hear the eager question asked of him, Clew’s response was short and concise.

“That would be the starvation,” Clew responded, “But we got through it with a belief that our country would emerge victorious.”

Clew, from Dana Point, was one of many military veteran guest speakers asked to come before the Dolphins football team this week to tell their stories of sacrifice, service and duty to their fellow man.

On Friday the Dolphins will pay tribute to 70 veterans with their Honor the Valor game. Each Dana Hills player will wear a custom camouflage jersey with the name of a veteran on the back. At the end of the night the players will meet their veteran on the field and present them with the jersey they just wore, a small token of appreciation for the people who have given so much.

Boosters and players have been raising funds all season long and the proceeds from the game will be donated to the Veterans of Foreign Wars Post 9934 and the Dana Point 5th Marine Regiment Support Group. Last year’s Honor the Valor fundraising drive collected over $30,000. This year they are on pace to exceed that mark according to Clay Wilemon, president of the 12th Man Club, the football booster organization behind the event.

Senior defensive lineman Blaine Wagstaff will wear a special jersey Friday night. He is wearing the name of Spc. Brandon Joseph Prescott, a 2006 Dana Hills graduate who was killed in action in Kandahar, Afghanistan in May. Prescott was a wrestler at Dana Hills and Wagstaff, also a wrestler, will present the jersey to Brandon’s mother, Tracey Prescott.

“I’m really honored. Whenever I’m playing now I think of what the veterans went through and it’s nothing compared to what’s going on here,” Wagstaff said.

Head coach Todd Rusinkovich hopes that each year, with each guest speaker who comes to practice, the Dolphins players can take away lessons and attitudes imparted by the veterans and apply it to life.

The Honor the Valor game is also an exercise in bridging the gap between generations.

“It means a lot to the veterans because they get to connect with the youth of America and inspire them and shed some history on what’s happened in the past,” Rusinkovich said.

“The kids get to look back into the past and talk to that first-hand experience. It’s unbelievable,” Rusinkovich said.

He talks about his wife, Caroline. He tells the players he has been married to her for 70 years, prompting smiles, nods and a little applause. That devotion to her helped him get through the long time he was imprisoned in the German camp, he says.

“How close were you to ever escaping?” another player asks. A question that had the promise of an exciting answer attached to it but instead, received a harrowing response.

Clew told of a deadly warning the POWs were given to not walk outside their barracks during an air raid, a tactic employed by the Nazis to limit the risk of a prison break. During one raid Clew witnessed an American soldier lose his life after straying too far from his barracks while the raid sirens were wailing. A faith in God and in each other is what carried the soldiers’ spirits in those times, Clew said. The silence that followed came with an understanding of just how real the bond between soldiers, or teammates, can be.

Junior middle linebacker Brett Bill is looking forward to Friday’s game, perhaps more than anyone else on the team. Bill gets to wear a jersey bearing his own last name. He is playing in honor of his father, Gerry Bill, who served in the Navy during the Vietnam War.

For Gerry, and a number of the other veteran honorees, Honor the Valor will be the first time they are publicly recognized for their service.

“As veterans from the Vietnam era, you quickly learned to not talk about your service. The anti-war sentiment of the population at the time was very strong,” Gerry said. “But this is a wonderful thing … I feel honored to be a part of this event.”

Odds are the name Bill will be uttered over the loudspeaker Friday night several times. Brett leads the team in tackles and he said his first of the night will likely come with an extra burst of adrenaline.

It’s getting dark on the football field and Clew is wrapping up his speech. He says he has to get home to have dinner with Caroline. He ends his talk with a memory from last season, when he was selected as one of the honorary captains in the inaugural Honor the Valor game. He says “thank you” to the players for allowing him to be a part of the team, even if it was just for one night. After, the players are the ones thanking the 90-year-old, lining up to chat and shake his hand. It’s no surprise the line is long.

Come Friday, Clew, Bill and the other veterans will all be on the field, on the backs of the Dolphins players; their stories and memories fresh on the players’ minds.

“We have to win this week not only for us but also for the veterans,” Brett Bill said. “I think we are going to come out fired up.”