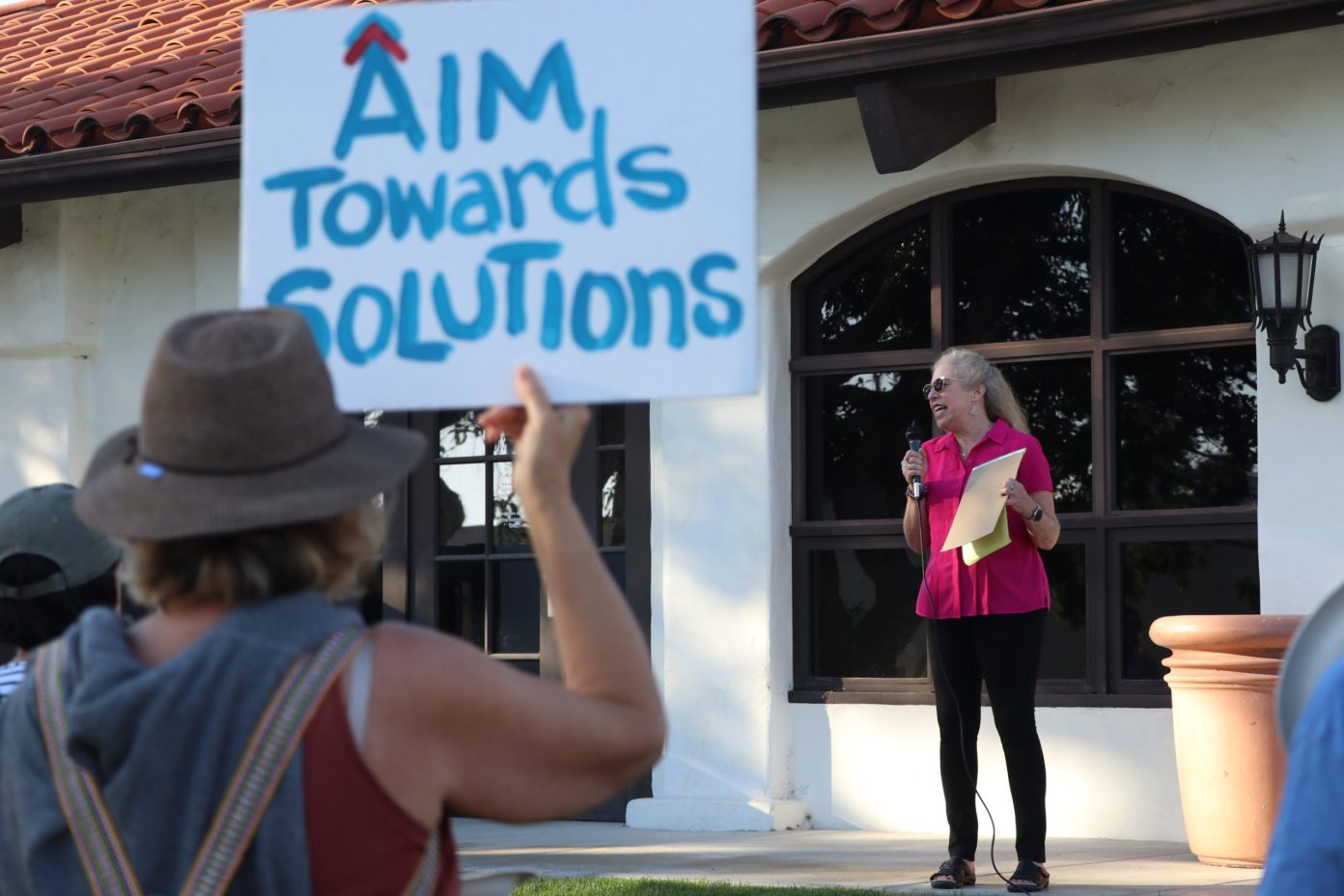 Advocates for the homeless and affordable housing gathered for a demonstration on Friday evening, Aug. 6, to call on the city’s elected officials to do more in providing shelter for the unhoused in San Clemente.

The rally, led by the coalition, comes ahead of the California Department of Transportation’s (Caltrans) plans to evict about two dozen homeless people who had been living at an encampment off a 5 Freeway exit ramp past the south end of town.

“We decided to have this campaign, which says ‘House Unsheltered People Now,’ house all the people within our community who need housing,” Esfahani continued to tell the crowd on the front lawn of the local community center and library.

Caltrans was initially scheduled to perform the encampment sweep on July 16, but it granted a one-month extension for the individuals to relocate and work with service providers who can connect them to resources and shelter.

According to Esfahani, while the coalition and other advocates have requested Caltrans to postpone the eviction further, until Sept. 30, the agency agreed last week to hold off on the sweep until Aug. 27.

A handful of advocates comprising religious leaders, area politicians and housing professionals spoke at the rally, which incited a sharp rebuke from counter-protesters, including Mayor Pro Tem Gene James, who has staunchly opposed proposals to build homeless shelters in San Clemente.

Following the conclusion of the House Unsheltered People Now demonstration, James fervently slammed the advocates’ housing-first approach to resolve homelessness, stating that such plans “put people behind doors … so they can smoke dope, snort dope and do whatever else it is that they do, on our dime.”

“To that, I say, ‘Hell, no!’ ” James exclaimed to the group of counter-protesters.

Near the onset of the rally, Jacky Trani, a member of the local coalition advocating for more affordable housing, acknowledged that while drug abuse and mental health issues are among the reasons people become homeless, she said, “Those are not the main reasons.”

“People become homeless for economic reasons, the wages are not enough to keep up with the cost of living and the cost of housing; housing costs keep going up and up,” Trani said, adding: “Sometimes, people lose a job, there is eviction, there is family dysfunction, relationship problems, changes, death, divorce, domestic violence, medical problems (and) medical bills.”

Oftentimes, she continued, many of the unhoused were already suffering from a multitude of mental health problems, including PTSD, anxiety and depression, among others, prior to becoming homeless. Those health concerns only worsen when they’re on the street, she said.

Helen Cameron is the community outreach director of the Irvine-based nonprofit Jamboree Housing Corporation, which operates several low-income and workforce housing developments, including the Mendocino Apartments in Talega.

“The majority of work that we do in California is (workforce) housing, but we work closely with cities to develop solutions for all those economically disadvantaged people who end up on the streets of San Clemente without resources to pay for housing,” Cameron said.

For homeless individuals suffering from substance abuse and mental health disabilities, the solution, according to Cameron, is supportive housing—a model to treat those with chronic illness by providing them with housing that has on-site clinical and counseling services.

“We know how to do this; those people who have a disability such as a mental health issue or a substance abuse issue, they must be housed with support services—the only thing that’s been proven to work,” she said.

Chris Megison, the founder and CEO of Solutions for Change, a Vista-based nonprofit, argued against the housing-first approach and state’s response system, questioning their effectiveness when homelessness is “exploding everywhere in California.”

“It’s because the homelessness response system that this group represents is broken,” he said. “It’s flawed at its very core. It uses a design that contains, controls and manages versus solves homelessness.”

Megison went on to accuse the housing-first model of increasing homeless people’s dependency on government programs and systems.

According to Megison, his nonprofit differs from the housing-first model by having the individuals go through addiction intervention and treatment programs to treat the “root causes.”

“What we do is we help them get treatment for that first, and instead of just giving the treatment and going out and now trying to go live life, we bring them right into an academy,” he said. “This academy is designed to actually empower them through over a two-year period and teach them skills in how to get a job, keep a job, stay sober, take care of their families.”

Megison stressed that the treatment and intervention was more akin to receiving medical treatment and shouldn’t be considered housing. Likewise, he continued, the academy is comparable to campus housing for college students.

“If you’re going to treat the root causes of someone who lost everything, you’ve got to have a place for them to put their head at night,” he added. “What (the advocates are) saying is putting somebody behind a door, and there’s absolutely not one—and I know the system pretty well—there’s no accountability or requirements to get well.”

Encinitas Mayor Catherine Blakespear, a Democrat who’s running for the state senate’s 36th District seat—currently held by Republican Sen. Patricia Bates—expressed hope during the rally that the city will step up to work with the state and county in developing shelter for the town’s homeless.

Echoing remarks Cameron had made earlier about billions of dollars in state funding being available to construct shelter space, Blakespear noted that permanent supportive housing is possible in San Clemente without having to use local coffers to finance it. The county, she noted, also has funding that the city can tap into.

“Try to get money from your county, because all human services come through the county,” she said, adding: “Counties want to work with the willing, so you have to demonstrate the will to be the willing.”

The state senate hopeful, who highlighted her city’s adoption of a safe parking program for homeless prevention last year, said it’s going to take the community working with elected leaders to decide on agreeable programs and solutions.