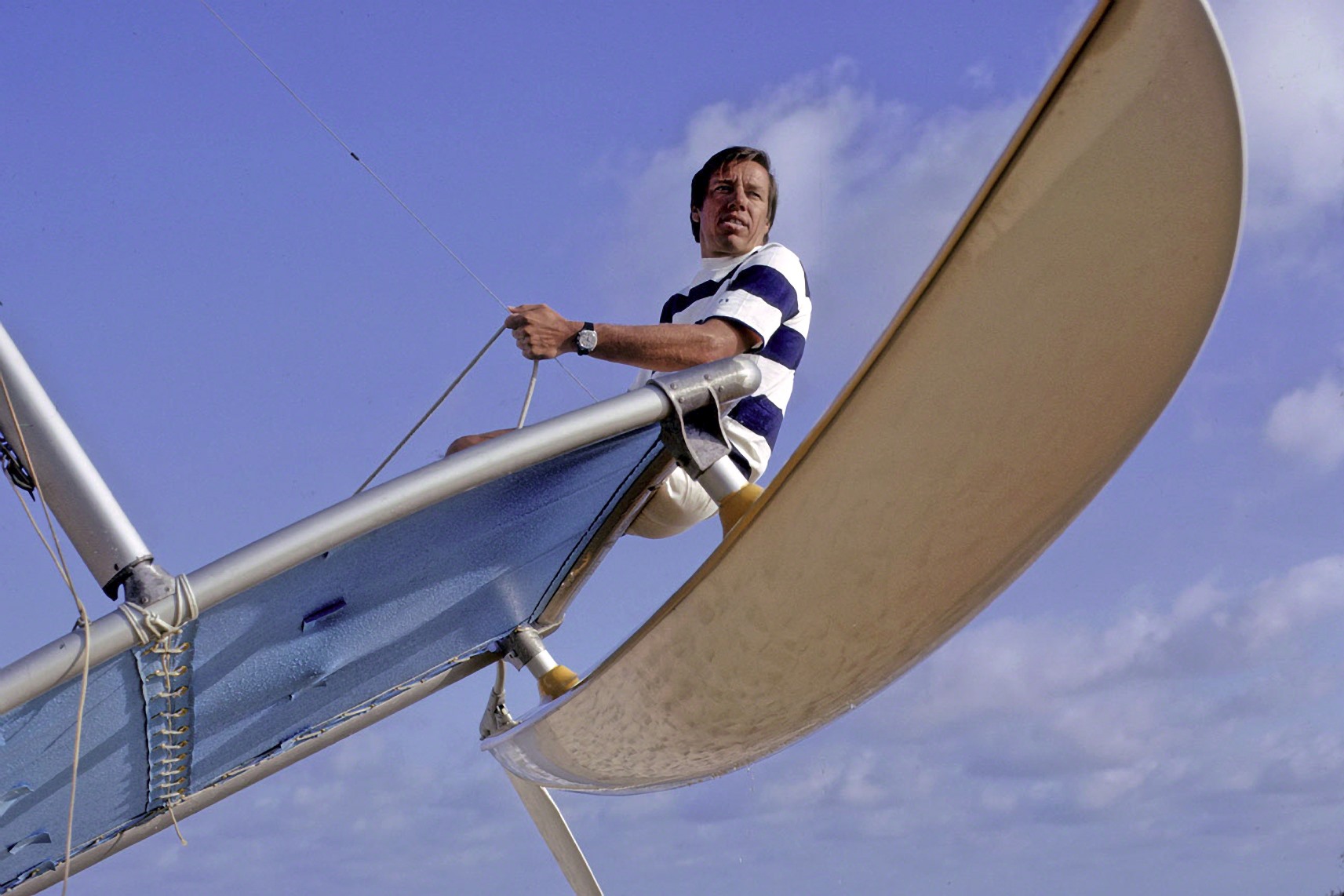 Hobie Alter: Farewell to a Pioneer of Fun

Since the late 1940s, if an outdoor activity was fun and “happening” in southern California, it was happening somewhere near Hobie Alter.

More than 60 years after he first began dabbling with making a better surfboard, it is safe to say his recent death will never erase the indelible mark he left on board sports and sailing culture. Nor will his memory fade in the hearts of family and friends.

Hobart “Hobie” Alter, pioneer of the modern surfboard, proprietor of Southern California’s first surf shop and inventor of the Hobie Cat sailboat, died Saturday, March 29 surrounded by family, in his Palm Desert home. He was 80.

Since being diagnosed with cancer five years ago, friends said Alter had also been battling a host of other health challenges.

Even before official word of his death was posted on the Hobie company website, social media posts, text messages and phone calls alerted the surf and sailing communities of his passing and set off the exchange of fond memories. Friends and admirers converged online, in the shops and on the sand, “talking story” about the man credited with revolutionizing surf and sail.

For many in south Orange County, remembrances included talk of interactions with Alter during one of his last public appearances. In December, he came out to a celebration for the release of his biography by Paul Holmes, Hobie: Master of Water, Wind and Waves, at the Surfing Heritage and Culture Center in San Clemente. The event was attended by many surf industry icons, as well as Alter’s friends and fans who came to reminisce about the legend’s long and storied life.

Building a Better Board

As chronicled in Holmes’ book, Alter’s revolutionary changes to the surfing and sailing industries began when he started shaping balsa wood surfboards in his family’s Laguna Beach garage in 1950.

“I was just getting into surfing and some friends told me Hobie was the guy to go to for a board. I went to his garage and we struck up a 60-year friendship,” said friend, fellow surfer and co-worker Wayne Schafer. “Every board I’ve ever had has been a Hobie.”

Alter’s father grew weary of the sawdust mess in 1954 and helped the budding shaper open his Dana Point shop on Pacific Coast Highway. A shortage of balsa wood prompted Alter’s early experimentation into new materials and the transition to foam and fiberglass began.

Alter and his friend and co-worker Gordon “Grubby” Clark developed a polyurethane foam that, when covered with a fiberglass shell, led to lighter, more high performance surfboards. The new method and materials also streamlined production and lowered costs.

Clark was staying with Schafer at Schafer’s Poche Beach home on Beach Road at the time.  Recovering from back surgery, Clark was bedridden when Alter asked for his help, knowing Clark had studied math and chemistry in college.

“That’s how it all started, right here in my beach house,” Schafer said, while reminiscing in his home surrounded by walls covered with black-and-white photos of his surf adventures. “Grubby had nothing to do besides lying in bed reading and looking at TV, so he agreed to help.”

Clark gave Alter a list of books to bring him from the library, and he began reading and studying the chemical properties of foam to use for surfboard blanks.

“One night I was invited to a little shop Hobie and Grubby had rented in Laguna Canyon,” Schafer said. “We went at midnight because their experiments were top secret.”

Schafer recounted how he helped the two pour cement into a broiler, purchased from a used marine dealer in San Pedro and then cut in half.  The cement was poured over a surfboard form to make a mold, Schafer said. Steel fasteners were fabricated to Alter’s specifications at the local metal shop for use in holding the mold lids closed.

“The cement and metal were necessary because when the foam expanded it kept blowing their wooden molds apart,” Schafer said. “I remember it vividly, how I was sworn to secrecy. ‘Wayne, we can’t talk about this,’ Hobie would say.”

But later, when Alter began churning out the new surfboard technology, people did talk. Word got out and Alter’s little shop put the Dana Point/Capistrano Beach area on the map as a surfing mecca.

Throughout his career, Alter’s ideas and innovations continued to shape and advance the surf industry. The invention of removable surfboard fins and his company’s early involvement in surf apparel led the Hobie brand to its place among the most successful surf industry brands of all time.

A Cat that Could ‘Fly’

In 1967, a love of sailing led Alter to apply his foam and fiberglass recipe toward building a lighter and more affordable sailboat that could be launched from the beach and handled by a single sailor. The result was the Hobie Cat, which according to the Hobie website, remains the world’s best-selling catamaran.

Not only has the Hobie Cat remained wildly popular since its 1968 launch, the Hobie catamaran class of multi-hull sailboats is, to this day, the largest. And the Hobie regattas that kicked off around the same time the boats were introduced continue to draw thousands of participants each year.

The Hobie Cat craze took off worldwide, said Schafer, who helped Alter launch this new sailboat to the masses.

“We bypassed the yacht clubs and created our own class. This catamaran was for the average joe,” Schafer said. “Even without advertising, we scrambled to keep up with demand, but we had such fun doing it.”

Alter’s continuous search for the next great plaything led him to make other design innovations including skateboards, a fly-fishing pontoon seat called a Float Cat and a remote controlled high-performance glider he called the Hobie Hawk.

“Hobie always wanted toys to have fun with, but he wanted better and more accessible toys than what was available on the market,” said longtime friend and fellow waterman Henry Ford.

The group of friends and collaborators surrounding Alter since the 1950s reads like a who’s who of legendary board shapers and creators of the surfing and sailing lifestyle—Corky Carroll, Mickey Muñoz, Dewey Weber, Phil Edwards, Walter Hoffman, Phillip “Flippy” Hoffman and many more. Alter was always surrounded by members of his generation’s close-knit tribe of watermen.

One such compadre, Dick Metz, Alter’s friend of 65 years and business partner of more than 55 years, describes Alter as “unusual in so many ways.”

“He would set his focus on something and put everything he had into it. It was like that with the Hobie Cat,” Metz added. “When it was too windy and cold to surf he set sights on making a boat so we could all go sailing. Then he just built it from scratch.”

Alter was remarkably inventive, creative and intensely focused, Metz said of the man whose formal education ended with high school. “He didn’t have schooling for it and I often wondered how he knew how to do so many things. From designing things to building the machinery to fabricate his designs, it was like he was from another world.”

After graduating from college, Metz was bartending at the Sandpiper in Laguna when Alter offered him the opportunity to manage his Hobie retail business, which by that time had grown to include 20 stores.

“I’d probably still be tending bar if Hobie hadn’t come along and offered me that job. He gave so many of us opportunities, and for that I will be forever grateful,” Metz said. “He was a great friend and business partner. I can’t say enough about him and the legacy he leaves behind.”

“Many of the kids who started working for our stores during summer breaks or right out of high school, have grown into careers with Hobie,” Metz said.

Alter was honored with a Surfing Industry Manufacturers Association Waterman Achievement award in 1993, was inducted into the Huntington Beach Surfing Walk of Fame in 1997 and into the National Sailing Hall of Fame in 2011.

Not so much an inventor as a “perfector,” Alter made a career out of improving existing sporting equipment. If it looked like fun, he was all in.

“Hobie was hell-bent on making things better. And if he was doing it, you could just about bet it was going to be the next big thing,” Ford said. “He did all the work and we had all the fun.”

Alter is survived by his wife Susan; sisters Carolyn and Lillian; daughter Paula and her partner Ian; son Hobie Jr. and his wife Stephanie; son Jeff and his wife Laurie; grandchildren Cortnie and her husband Dylan, Brittany, Scotty, Cody, Ashlyn, Tyler, Noelle and Justin; great-granddaughter Serena and many close friends that were always made to feel like they were immediate family.

Following is the official memorial service information from the hobie.com website:

Service will be held on the 9th fairway from 4:30 p.m. to 6 p.m. Please do not arrive before 3:30 p.m. There will be no access to the property before that time.

In honor of Hobie, preferred attire is beach casual. Coats and ties are not necessary but it can be cold in Aliso Canyon this time of year, so dress accordingly.

A public paddle out and remembrance will be held from 4 p.m. to 7 p.m.

On the water ceremony will begin at 4:30 p.m. Boats and boards are welcome. However, no beach boat launching will be permitted. All boats must be launched from Dana Point Harbor and all vessels must adhere to local boating rules and regulations.

Doheny State Beach has opened its gates free of charge from 4 p.m. to 7 p.m.

Please come and join us on the water to celebrate Hobie’s life and legacy by doing what he wanted us all to do. Have a Hobie day.

In lieu of flowers, the family requests donations to one of the following organizations be considered: