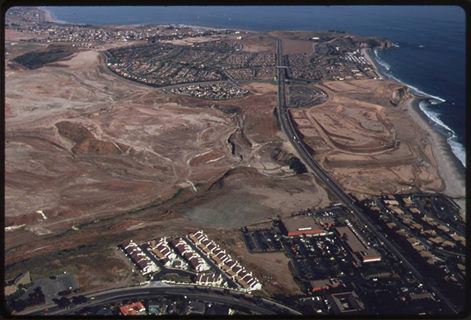 This area, once divided up into Mexican land grants, provided the means for cattle raising, which eventually lured Richard Henry Dana here. The scenic area brought many people here to settle. And the land grants were bought, divided and sold to accommodate the influx of those looking for a better life.

The Monarch Beach Community of Dana Point was once a part of those grazing lands. Rancho Niguel, established in 1842, was bought by Laguna Niguel Corp. in 1959 from Lewis Moulton and Pierre Daguerre, to build a new community. In November 1959, plans were announced for the new community of a 7,000-acre city bounded by the new freeway and the coastline. In these plans were many amenities, including a man-made sea lake. By July 1968, plans were announced describing the saltwater inland sea with a depth up to 65 feet. The surface would cover over 35 acres inland of Pacific Coast Highway. The Pacific Ocean and the lake were to be separated by a concrete dam.

It was promoted as the first man-made mini-ocean of its kind. It was to be called Sea Lake Village and located in what is today the northern half of the Monarch Beach Golf Links. Dreams included fishing activities, vacation homes and a water cultural center with dolphin performances.

Huge pumps would be required to bring in ocean water in the amount of 300 million gallons. The concept of a lake was proposed as cheaper than maintaining a golf course, and just under $1 million. To overcome evaporation and seepage, the pumps would run periodically to cover the level change of about seven feet a year, but would be free of any tides. The salt content of the water was expected to vary, but able to sustain several species of ocean fish.

By 1969, AVCO Corp., based in New York, was successful in developing the planned community of Rancho Bernardo in San Diego County and a merger with Laguna Niguel Corp. ensued. The plans continued with an August 1969 newspaper announcement that Mr. & Mrs. Morris S. Book, of Arcadia, had moved into their new home at Laguna Niguel overlooking an inland sea area known as “Sea Lake Village,” even though it hadn’t been built yet.

In 1971, AVCO got an agreement with the County of Orange to abandon some public prescriptive rights associated with the Salt Creek Beach area. But after some debate, the deal wasn’t deemed reasonable. Part of the reason was rumors from Sacramento of a freeze on all of the shoreline. We know today that rumor was the creation of the California Coastal Commission in 1972.

A subsequent lawsuit followed. AVCO continued under their 1971 development agreement with the county. About 473 acres, formerly known as the Capron Property, came under the new Coastal Zone. The county would not grant permits until after the grading. After the grading, the Coastal Commission said AVCO did not have their building permits and therefore not vested and not exempted from the new act. This lawsuit carried on through 1975. And at that time, the real estate building industry was going through a recession.

Somewhere in all of this mess, the Sea Lake Village dried up. Ten years later, David Stein and Barry Brief, the managers of the AVCO project, defaulted on their loans. Today, we have the St. Regis and a champion golf course.

Carlos N. Olvera is Chair of the OC Historical Commission, and Councilman of Dana Point.