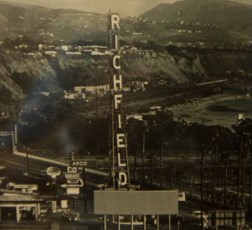 The Dana Point Historical Society will honor and welcome two longtime local businessmen at their annual meeting and potluck on Wednesday, January 22.

He came to Dana Point on a surfing trip in the early ’60s and later became a dealer at the Atlantic Richfield gas station, now home to the Arco on Pacific Coast Highway.

The site was once home to the 125-foot lighted tower and sign reading “Richfield,” with a blinking beacon sitting atop it. The tower was erected in 1928 as part of a planned chain of more than 30 such beaconed towers along the West Coast. The sign was dismantled in the 1970s with only the beacon being salvaged, and for years the beacon sat in Deffenbaugh’s shop behind the gas station.

Deffenbaugh will now present the beacon to the historical society and discuss its history.

Also, longtime DPHS member and owner of Coffee Importers, Jim Miller, will be presented with the Pat Plepler Award for outstanding community participation and service.

Attendees are asked to bring a potluck dish for six-to-eight people along with their own tableware. Visit www.danapointhistorical.org for more information.