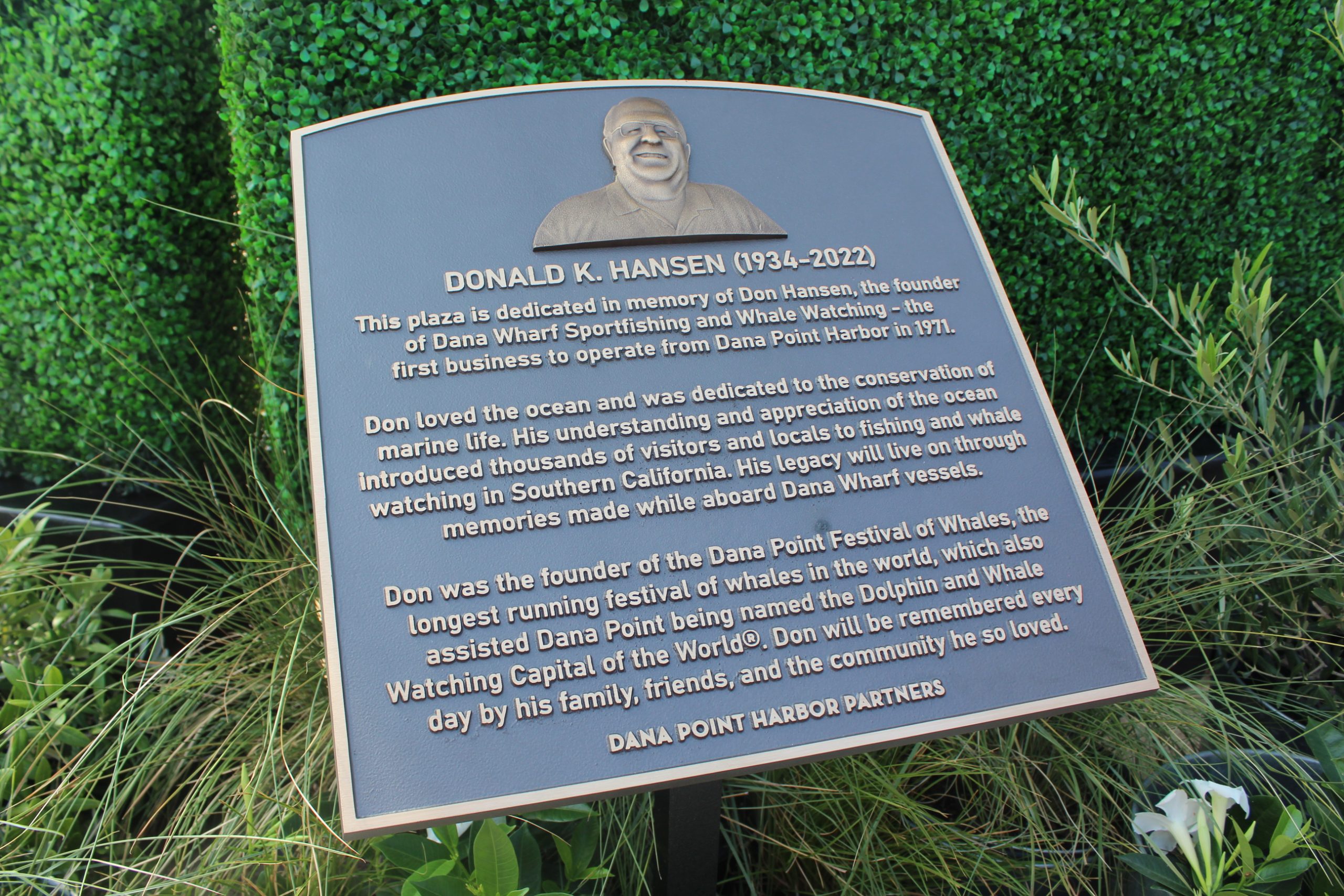 Memorializing a lifelong legacy of shaping the Dana Point Harbor as the whale watching destination it is today, the plaza formerly known as the Dana Wharf Courtyard was rededicated as the Hansen Plaza in memory of Dana Wharf Sportfishing & Whale Watching founder Don Hansen.

“On behalf of my family, many who are here today and many that could not make it,” Kalez said, “we want to thank the Dana Point Harbor Partners for dedicating this plaza and renaming it to Hansen Plaza in honor of our father, Don Hansen.”

“They all had a vision, and I appreciate it so much that we were able to do this before the construction begins,” Kalez said.

After speaking with Ward and Ueberroth, the Hansen family instead decided on a plaque honoring Don Hansen in the plaza next to Dana Wharf Sportfishing & Whale Watching, thinking that a social meeting spot would be a special way to honor the harbor legend.

“Now, everyone will say meet us at Hansen Plaza,” Kalez said.

“My dad was, indeed, a harbor legend, and now his legacy will live on forever through Hansen Plaza,” Kalez continued. “Never could we have imagined the true impact that he would have on the harbor and the community 51 years ago.”

Hansen started the local whale watching company in the Dana Point Harbor in 1971. He took over the San Clemente Sportfishing, Inc. in 1966 and moved the business to the newly built Dana Point Harbor, where he established Dana Wharf.

“Don had the very first business here in the Dana Point Harbor,” Bartlett said, “and I can tell you, over the years when I was on the City Council and when I was on the Board of Supervisors, every time you see him, he’d give me a hug and say, ‘When is that harbor project going to start?’ ”

Bartlett also gave an update on the harbor construction efforts, noting that work on the parking structure will begin shortly, and marina docks are currently being constructed outside of Sacramento to be installed in the harbor soon. The project will take an estimated five to seven years, Bartlett said.

“What better way than to have Hansen Plaza, where people can always say, ‘We’re meeting in Hansen Plaza,’ and that really pays tribute to the great work and everything that Don gave to the harbor over the 51 years,” Bartlett said.

Hansen is also credited with being the first to offer whale watching in Orange County and beginning the Dana Point Festival of Whales, which is set to celebrate its 52nd year next March.

“The Hansen family has been a fixture in the harbor since the very beginning,” Muller said. “The contributions that Don and Donna and their family have made to the city have really become immeasurable.”

Noting the city’s designation as the trademarked Dolphin and Whale Watching Capital of the World and the first and only Whale Heritage Site in the Americas, Muller said, “You know how important a family is when their traditions have become community traditions.”

“Don truly was a lifeblood and shaped the harbor’s culture,” Muller said.

The plaque designating the plaza formerly known as the Dana Wharf Courtyard as Hansen Plaza will be preserved and reinstalled in the plaza following the harbor renovations, Ward explained.

“It is our great hope that with this plaque that we will be unveiling shortly, that people that knew Don well will continue to tell his stories and share your memories and those stories with all the guests that work their way through the Dana Point Harbor,” Ward said.