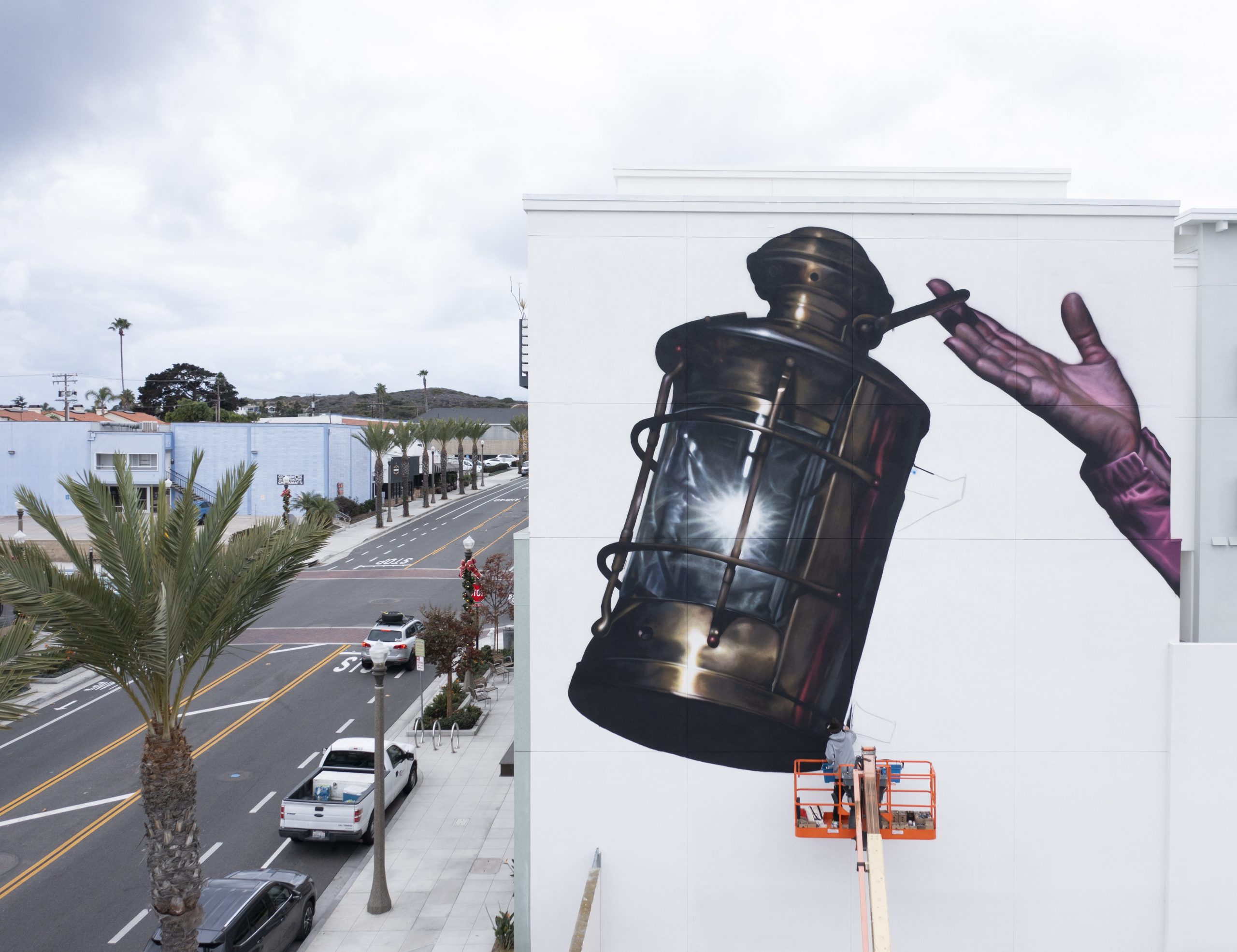 Artist Drew Merritt put the finishing touches on “Guiding Light,” a spray-painted, photo-realistic mural displayed at Prado West this week. Punctuating the completion of the mural, Merritt on Wednesday, Dec. 15, adorned the Del Prado Lantern Mural with his signature.

The mural, which will measure approximately 40 feet by 30 feet, is part of a larger art project called Art in Public Places that will involve rotating art halls and a performance by the Music Preserves Foundation.

“As a part of the Art in Public Places we wanted to come up with something creative, like a multifaceted program instead of just spending all of it in one spot,” said Dylan Barreira, real estate analyst at Raintree Partners.

“It’s always been our vision to have a large-scale mural on this wall; as you can see, it lends really well,” Barreira said.

“When we saw Drew’s work, we’re like, that’s the one, we’re getting him to do this,” Barreira said. “And, I mean, his artwork was just amazing, like so realistic, like what he can do with paint cans is pretty incredible. So as soon as we saw that, we’re like, yeah, we’re going with Drew.”

After submitting a few designs, Merritt, along with Raintree Partners, landed on the lantern design.

“Ultimately, you know, the lantern just felt right,” Barreira said. “Obviously, it’s a pretty unique component to Dana Point—the Lantern District. You have all the lantern streets, and I think that’s a pretty cool piece of Dana Point, and it has a rich history to it. So, it’s kind of honoring that history and preserving that history, and obviously, some changes that are happening.”

Merritt added that he liked the idea of a lantern as a positive light in the darkness, like a guiding light. Merritt wanted to pay homage to the historic lanterns of Dana Point and has already had residents stop by, letting him know that the work resonated with them.

“I had a few people stop by the last couple days who were like, ‘Oh, like I grew up on Copper Lantern or Golden Lantern or down the street or whatever.’ And I was like, that makes me so happy,” Merritt said. “I really had to kind of dig deep and do a lot of research and stuff, and definitely wanted to do things for the locals … I wanted to not only do stuff for general people, but also for the people that grew up here.”

Merritt added that there’s an interesting juxtaposition to creating a photo-realistic mural from spray paint.

“Whenever I do murals, it’s with spray paint, but it’s in the same kind of oil painting style,” Merritt said, further explaining, “It’s taking something kind of classical in the sense of oil or traditional painting and then using a brand-new technique from the last 20 years or whatever.

“It would generally be used in graffiti, street-art type of thing,” he continued. “It’s kind of putting a twist of that in with traditional, and doing something kind of new and a little bit old.”

The mural will also have an augmented reality (AR) component, a first for Merritt. A QR code displayed on a plaque below the mural will reveal, through AR, ships and dolphins behind the lantern.

“I’m excited for it,” Merritt said. “But the concept is that the lantern will be casting shadows of different marine life, like different whales.”

After driving to Dana Point to begin the mural, Merritt said he fell in love with the city.

“After planning it all out, months and months of prep and figuring out the timeline, scheduling, and how execution and painting and artistic design and then AR and all of the different elements, I got down here, and I freaking love Dana Point,” Merritt said.

“This place is rad. I’ve driven through a few times; I’ve never spent a lot of time, but after spending a few days here, I love it,” he continued. “It’s one of my favorite places in California.”

Raintree Partners will be holding a soft opening for Prado Square in the first quarter of 2022.

City Council approved plans for another mural to be installed in Doheny Village at its Dec. 7 meeting.

The Doheny Village mural will be installed at the U.S. Post Office on the corner of Doheny Park Road and Las Vegas Avenue, using vinyl wrapping, similar to that used on the utility boxes throughout Dana Point.

The vinyl-wrapped mural, measuring 16 feet by 80 feet, is expected to last at least five years, with little fading or maintenance.

The Arts and Culture Commission hopes to hold a ribbon-cutting ceremony for the Doheny Village mural in the first quarter of 2022.