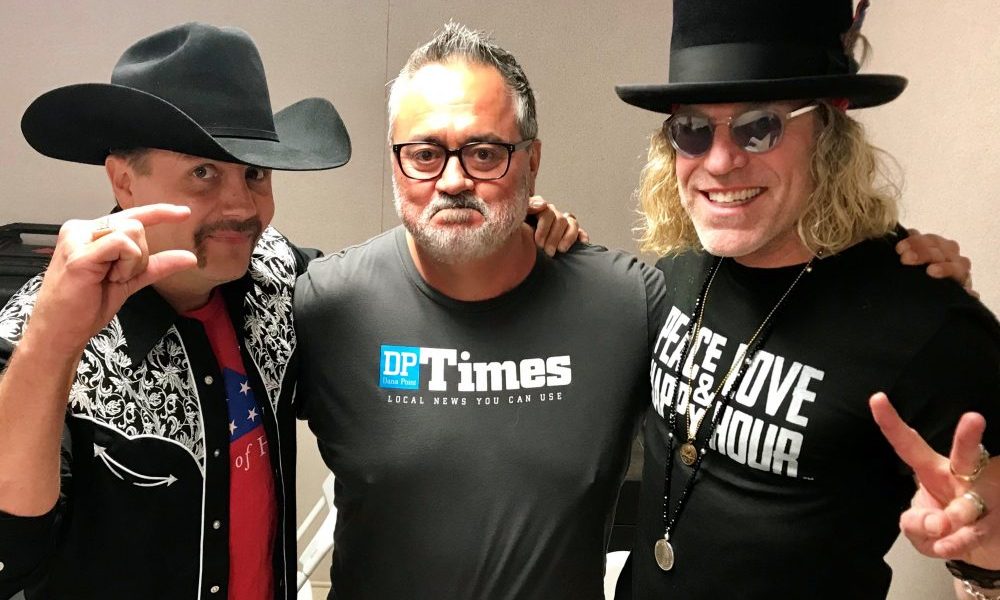 On a gorgeous Sunday afternoon last weekend, Doheny State Park was filled with country music fans enjoying Driftwood Festival’s second day of craft beer tastings, barbecue and music by the likes of Kristian Bush of Sugarland, Brooke Eden and headliners Big & Rich. I caught up with Big & Rich for an entertaining chat right before they took the stage. I was also able to speak at length with John Reese, CEO of Synergy Global Entertainment (SGE) and producer of the Driftwood, Ohana and Sabroso festivals. On this Memorial Day, the common themes that ran through both conversations were thinking of others, community and safety, especially given the tragic week of California wildfires and the horrific mass shooting at Borderline Bar and Grill in Thousand Oaks.

“The good people in the world outnumber the bad people a million to one. The bad guys aren’t gonna win. They can kiss our country (rear end),” John Rich shared as Big Kenny chimed in, “Art and music help bring people together without a shadow of a doubt. So we use country music, hip-hop, heavy metal, rock and roll, etc. to reunite everybody as one nation under music, without prejudice. We wear MUZIK MAFIA rings to represent Musically Artistic Friends In Alliance and nothing, I mean nothing, can come between us and all our friends and fans out there. That’s the glorious way that music brings everyone together, no matter what your little miniscule differences might be; we’re all just people in this together.”

Rich was recently in a well-publicized, politically charged Twitter battle with Americana artist Jason Isbell, but respect changed the original dynamic of the exchange.

“You can hold your ground on what you believe, but you don’t have to turn it into a fist fight,” Rich said. “I responded kindly to Isbell and he appreciated it and responded correctly. I hope other artists take note and I’d like to see that tone continue in our country.”

Rich added, “We’ll never let anything separate us from those shared musical experiences and the chance to give back. We feel like, in America, you’ve got the right to dream as big and work as hard as you want and we want to help where we can. Our Redneck Riviera Whiskey has supported the Folds of Honor Foundation and we just wrote them a check to cover 31 college grants to kids and spouses of our fallen and disabled service members.“

That respect continued during Big and Rich’s set, when they brought up veterans Jayson Brave Heart and Larry Fellows and Route 91 Festival survivor Joe Ortiz of Whittier. Fellows had been honored earlier as a Hometown Hero by SGE’s John Reese and his wife Elenie Reese and presented with a signed guitar to the roaring approval of the crowd and chants of USA, USA. That guitar presentation tradition, originally known as Metal of Honor, was started by Elenie Reese at SGE’s Mayhem Festival.

SGE’s John Reese started in the concert and festival business in 2004, working with Robert Smith of The Cure and he now owns and produces 35 music festivals and 54 brands, creating the artwork and choosing the artists and integrated concepts for each show. SGE is one of only two national festival companies and their Lost Lands Festival was just named Festival of the Year and featured 110 life-sized animatronic dinosaurs.

“This year, we’ve done three major music festivals here in Dana Point,” Reese shared, “Driftwood is the last one of the year, following Sabroso, which featured The Offspring and lead singer Dexter Holland’s Gringo Bandito Hot Sauce, Lucha Libre wrestling, and a taco eating contest won by Kobayashi and of course Ohana Festival, curated and hosted by arguably the biggest rock star on the planet, Eddie Vedder. I almost get teary eyed, to see what it means to Eddie and to Dana Point. He calls this place (Doheny) hallowed ground and I agree. I’m just thankful to California State Parks, who allow us to do cool things here and to Rich Hayden and Lori Coble, who share in the vision. We have integrated relationships with the City of Dana Point and City Manager Mark Denny, with the Coastal Commission, the traffic engineers and of course with Police Chief Lt. Margie Sheehan. Our number-one responsibility isn’t fan experience, it is public safety. No one’s going to scare me and I don’t want anyone to scare or hurt my customers. We all will always go above and beyond to ensure that safety.”

These are consistently world-class events that have meaning, create awareness and give back to the community via Elenie Reese’s involvement and coordination with local nonprofit organizations like San Onofre Parks Foundation, Doheny State Beach Interpretive Association, Surfrider Foundation, SeaLegacy, Surfing Heritage & Culture Center, Wyland Foundation and the Rob Machado Foundation.

“We always leave the park in better shape than when we arrived and we work with the State, County, City and Chamber to be a good patron and a good partner. We want to be asked back.” Reese concluded, “I’ve lived in South Orange County since 1991 and now my youngest daughter goes to Dana Hills. To be able to bring all this to my hometown and share it with my family, our friends and our community is very special.”

Anthony Small is Chairman of the City of Dana Point Arts and Culture Commission, front man for the local rock band Small World and a solo singer-songwriter. Small and his family have lived in Dana Point for 21 years. Facebook: Small World Band YouTube: Anthony Small Music

Letter to the Editor: Council Majority Says You Can’t Vote

GUEST OPINION: A Tale of Two Cities: A Farewell

Bartlett Bulletin: COVID-19: Where Do We Go from Here?