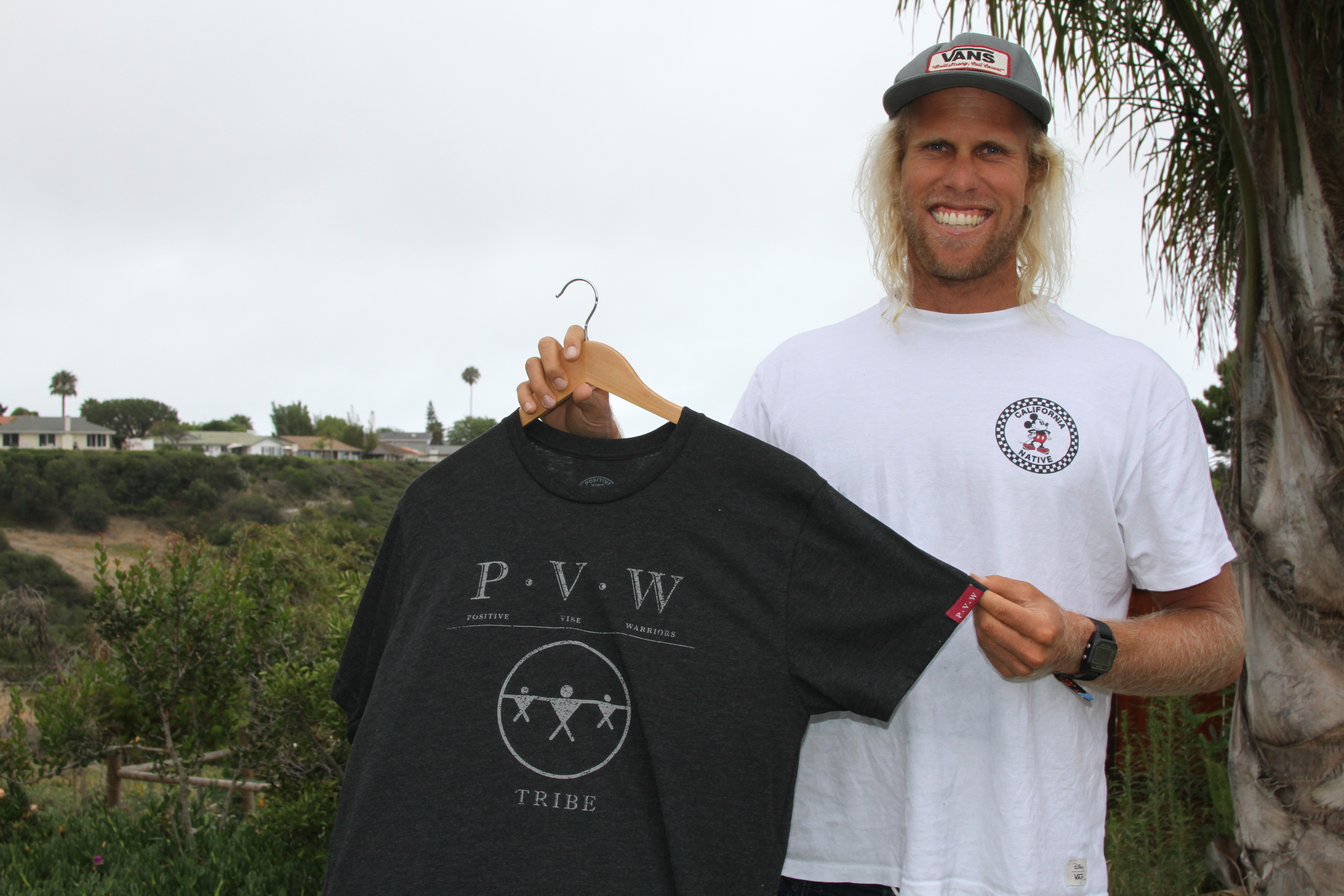 ‘Gud’ Vibes: San Clemente’s Gudauskas Brothers Launch Foundation to Give Back to the Surf Community

San Clemente-based pro surfers the Gudauskas brothers launch Positive Vibe Foundation to give back to the surf community, spread positivity

Positivity, good vibes and determination are three traits San Clemente professional surfers, and brothers, Dane, Patrick and Tanner Gudauskas have come to be known for in the community as well as the greater surfing world. With the recent creation of their new foundation, Positive Vibe Warriors, the brothers are ready to expand their support of surf-stoked youth worldwide.

Having created the Stoke-o-Rama surf event—free for local groms—in partnership with the Friends of San Clemente Beaches Parks & Recreation Department, the brothers saw an opportunity to do more and, inspired by their own experiences, decided to share their message of good will and good times by sharing ‘Gud’ vibes with an ever-increasing circle of friends. Positive Vibe Warriors Foundation is the next step in realizing this dream, they said.

“Growing up around contests, we were always inspired—making friends and meeting loads of new people. We got to know kids from many different places and have made lifelong friends from those events,” Dane Gudauskas said. “The ocean has always been a place of camaraderie for us—a place to get to know like-minded people and hang out with them. It’s given us a good foundation of friendship.”

These childhood experiences are what Gudauskas said originally prompted the creation of the Stoke-o-Rama event at T Street to benefit local kids. Having worked successfully with the Friends of San Clemente Foundation over the last four years, the brothers wanted to grow it and take it to other places in the country and beyond. They created their new foundation to help support this growth.

“We saw the camaraderie Stoke-o-Rama created and wanted to expand on that,” Gudauskas said. “Not to the point of creating a league or anything like that, but to get communities excited about the youth surf culture in their areas and create a great environment and energy because that’s what we felt was important in our childhood and one of the reasons we feel San Clemente is real special.”

As has been the case with the original Stoke-o-Rama, they will continue to focus on youth water safety programs, such as Junior Lifeguards, a program that has been benefiting from their event during its four years of operation, as well as swimming lessons to help kids qualify for Junior Guards.

“If you can’t pass a swim test, you can’t get into Junior Guards,” Gudauskas said. “We want to provide this for kids whose families can’t afford lessons, or Junior Lifeguards.”

The Positive Vibe Warriors Foundation will work in conjunction with Stoke-o-Rama events. Vans and other companies will continue to support the contests and the events will be utilized as fundraisers for PVF which will then donate 100 percent of the proceeds directly back into the communities where the events are held. Funding for Positive Vibe Warriors is completely donation-based, from events, PVW merchandise sales and independent donations.

Last year the brothers raised $12,000 for the Friends of San Clemente Foundation through the event sponsors, money that went directly to provide scholarships to the city’s Junior Lifeguard program for children in need.

In other cities, the programs benefitting from PVW and Stoke-o-Rama events might be different as the needs of communities vary, Gudauskas said.

Along with merchandise sales, the website includes a blog featuring inspirational “warriors,” people who have overcome tremendous adversity in a positive way.

“We have Codey Fears, our first inspirational warrior, who has eye cancer,” Gudauskas said. “He lost one of his eyes and the threat of losing the other one will never go away. He has taken on surfing. He loves it and he rips. He also loves skateboarding and busts airs and stuff. We also just featured Mike Coots, a surfer from Hawaii who lost his leg in a shark attack bodyboarding and is now one of them main shark conservationists in Hawaii and surfs with a prosthetic leg. Having inspirational warriors on the page is fun.”

Overcoming physical adversity is not all it’s about though, he said. Stories could include a kid who was bumped from foster home to foster home and really just wanted to be able to surf, or surfing being a part of someone’s emotional healing.

“We want people to be able to share their stories because they could help others find inspiration in their own lives,” Gudauskas said. “It could be anything. We want to hear it. If people want to share, they can reach out to us.”

Alongside their mission of holding Stoke-o-Rama events to help kids and their communities worldwide, the Gudauskas brothers want to find other ways to help unite surfers worldwide and share the love of the sport across cultures.

“We’re hoping to have a global impact,” Gudauskas said. “Hopefully people will enjoy wearing Positive Vibe Warriors merchandise and representing the message. That would be all we could ask for. We truly believe it has the potential to create a lot of good energy. The surf community is small in the big scheme of things but it’s growing globally. If this brings the surfing community together even a little bit more than it was, then that would be pretty cool.”

Their reach has already begun to extend to the greater surf community worldwide.

“We were in Jamaica having a fun time with this whole Jamaican crew and saw such a need for support,” Gudauskas said. “They are the coolest people and so stoked on surfing but they just need a little support.”

Another faraway example is happening now in Norway, where during two 20-day wintertime trips over the course of three years, Gudauskas found a developing surf culture he and his brothers are now hoping to help inspire by mentoring the youth.

“There’s a tiny village in the Lofoten Islands near the Arctic Circle with just a few people who are super stoked on surfing,” Gudauskas said. “We got to see the first surfboard in Norway in one of the families’ homes—the home of the first surfer in Norway. He had spent some time in California and saw a Beach Boys album cover and came home and shaped a board based on that photo. I think he made it out of metal or something and never rode it, just strapped it to the roof of his car and rode around with it. Later he got into it and started surfing and shaping his own boards. Now the third generation of surfers wants to compete in the ISA (International Surfing Association Championship, coming up in October in Oceanside) for the first time.”

PVM will help them out, he said, by making their team uniforms and visiting in September to do some training with the kids and get them tuned up for the event.

“Beginning with this first team of four kids, it could develop into a surf hub, you never know,” Gudauskas said. “But basically it’s just going to be good for the kids, to grow their perception, to come here and meet people from all around the world and share that bond of the ocean. When you travel you find out that there are amazing people all over the world who love surfing. And they all just want the best for their kids and their friends. It’s not too different from the way the surf community is here.”

WHAT’S IN A NAME

“Patrick and Tanner were getting ready to go to Snapper Rocks and I was doing some artwork on Patrick’s board—a kind of tribal theme—and for some reason I included the three stick men and the words ‘positive vibe warriors,’” Gudauskas said. “We thought, ‘wow that’s rad.’ I think Tanner put it in the circle and we just started making stickers and having fun with it. It was something to get stoked on because it made us stoked just looking at it.”

The brothers began sharing their sticker, and their message of positivity, among fellow World Surf League Qualifying Series surfers.

“It’s pretty jungle out there on the QS,” Gudauskas said. “It may be a little different now that kids have coaches and team managers, but when we were young we were just going to events in random places we didn’t know anything about. We had to figure it out—how to rent a car, get to places without speaking the language, your boards getting lost and competing against big burly pros—and then you’ve got to perform. It was a real life lesson to us, helping us to learn to stay positive and somehow not get beaten down by the competition.”

In the creation of the logo and Positive Vibe Warriors name, they found a sort of metaphor for life, Gudauskas said, and something that applies to everybody, not just kids chasing a dream of becoming a pro surfer, but chasing any dream.

This message has been embraced by friends all over the world, he said, and has become a part of the camaraderie among the Gudauskas’ fellow professional surfers.

The brothers walk the walk both locally and abroad as they share their message of positivity. With smiles on the beach, win or lose and supporting the local youth, they have not only become role models for young surfers in the area, but admired competitors among their peers as well.