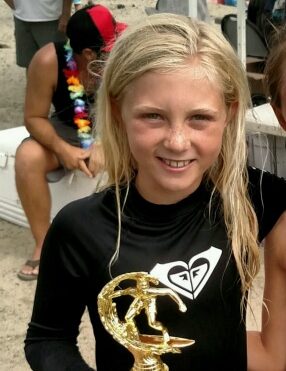 Grom of the Week: Rilynn Baker

Rilynn Baker, 10, has been surfing with her father at local breaks like San Onofre and Doheny State Beach for the last five or six years.

While she competed in her first contest this last June, the Menehune surf contest at Doheny, Rilynn said she likes to surf for the pure fun of the sport and her love of the ocean.

“It’s really fun to just go out there and hang out with other people,” Rilynn said.

“It’s something that we share together; it’s just something to enjoy,” said Tim Baker, Rilynn’s father.

A Dana Point local and longboard surfer, Rilynn enjoys taking off on a wave and practicing different surfing maneuvers.

“Taking off is really fun, and standing up and doing cool moves,” she said, adding that she’s been working on moves like bottom turns and nose rides.

Rilynn said her favorite surf spot is Cove Park in Maui, Hawaii, where she regularly visits her grandparents’ condo and surfs in the mornings with her father and grandfather.

“My dad, grandpa and I go surfing at Cove Park in the morning. The waves are like Doheny,” she said.

In the future, Rilynn hopes to visit and surf the waves in Mexico and Fiji, and maybe even the North Shore in Hawaii.

When asked what surfers she looks up to, Rilynn immediately responded with Bethany Hamilton.

“I like Bethany Hamilton. I like that she’s Christian, that she’s brave; she lost her arm and kept on surfing,” she said.

“She had faith that she can be a pro surfer, and she is now,” Rilynn added.

When she gets older, Rilynn said she would like to buy a ranch and farm produce and animals similar to the ones her family has in their backyard.