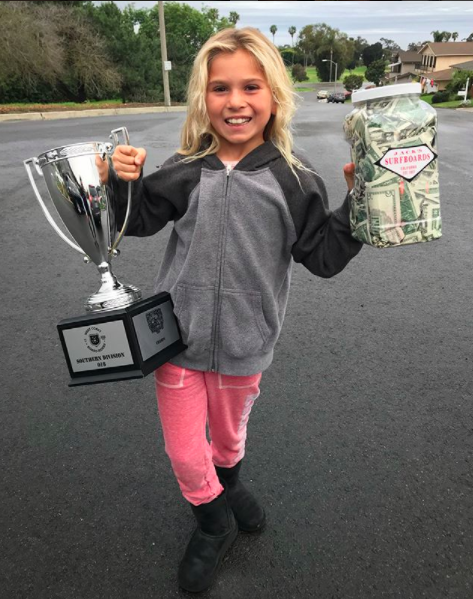 Grom of the Week: Mia McLeish

The rub on competitive surfing is that it’s sometimes considered an individualistic, perhaps even selfish pursuit. All that time spent trying to get the best waves of the day, dominating your competitor, it can be a bit one-dimensional, which is what makes the rebirth of surf clubs in San Clemente, Dana Point and up and down the coast so awesome. They’re bringing surf communities and generations together like never before.

Case in point, the performance of Mia “Mouse” McLeish at the recent West Coast Board Riders contest in Huntington Beach. At 10 years old, she’s the youngest competitor on the San Clemente Board Riders team, but she’s had a huge impact. Already a veteran of the squad, she helped lead the team to victory at the specialty competition at the Jack’s Pro last week.

For the effort, the Positive Vibe Warriors Foundation (PVW) named her their Grom of the Week. In the PVW Instagram announcement, icon surf filmmaker Taylor Steele took the time to say, “Congrats and ripping” to Mia. Mind you, Taylor’s the guy that put Kelly Slater, Rob Machado, Kalani Robb and the rest of the Momentum Generation on the map.

“Mia, you are my hero,” wrote Jon Walla, who is credited as being one of the first people to surf Cortez Bank and has kids of his own that surf around town.

They may call her Mia Mouse, but this ripping little regular-footer has the heart of a lion. Big things are in store for her.