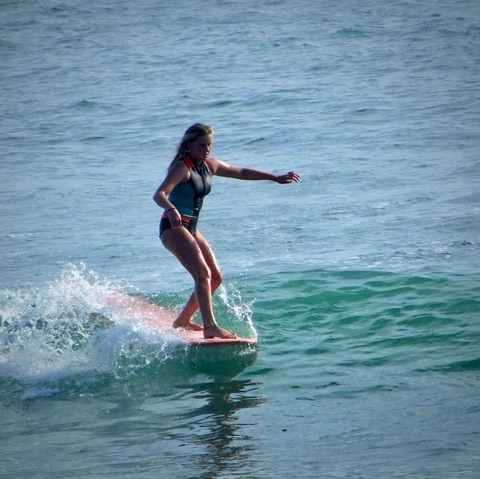 Grom of the Week: Carolyn Sachse

When asked what’s the best thing about surfing, Carolyn Sachse knows what’s up.

“It can turn a bad day good,” she says without hesitation.

An eighth-grader at Shorecliffs Middle School, Sachse is wise beyond her years. Barreling into her third year on the surf team, she’s been surfing since the ripe old age of 4 and is as comfortable ripping a shortboard as she is gliding on a longboard. Lately, she’s decided to focus her competitive energy on the longboard, and it’s paying off big time.

Sachse is leading the pack of Orange County’s middle school longboard girls on the Scholastic Surf Series rankings after winning the first two contests of the year. And in the Western Surf Association contests, she’s been surfing up a division, competing in the 17 and Under group. Keeping the vibe alive, she came away from last weekend’s contest at the Oceanside Harbor with a big win in her division.

Not just a success in surf, Sachse is also getting the job done in the classroom, which is sure to set her up for success with whatever the future may hold. Last summer she was one of only a handful of girls in South Orange County to receive a scholarship to attend a week-long science camp at the University of California-Irvine. When Sachse grows up, her goal is to become a marine biologist, which sure as heck isn’t a bad job for somebody that loves surfing as much as she does.